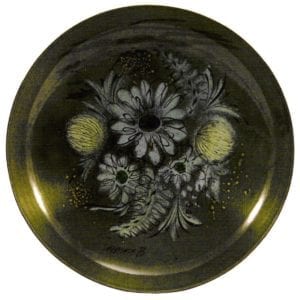 Sascha Brastoff and His Talents

Sascha Brastoff was known for his talent and ability in many fields of art, both performing and visual, both fine art and fine craft. He was also one of our own, an enamel on metal artist, however that was just a small part of his output.

He was born Samuel Brastoff (Brastofsky) in 1918 in Cleveland, Ohio. His father was Russian and his mother was Hungarian. He decorated his first pottery as a small child on the family’s dinner plates. The decorations were always washed away so that dinner could be served.

Growing up his interests moved towards making sculpture and studying ballet. His Russian ballet teacher convinced him to change his name from Sam to Sascha although this disappointed his mother. At age 17, his studies in dance with Edward Caton eventually led to performing with the Cleveland Ballet for several sessions. He graduated from Glenville High School in Cleveland in 1935.

In the late 1930’s he attended Western Reserve School of Art where clay sculpture was one of his early successes. One of his works was awarded a prize for whimsy in the 1939 Ceramic National Exhibit at the Syracuse Museum of Art (Everson).

At age 22, in 1940 he went to New York and became employed at Macy’s department store in Herald Square doing window displays.

Wanting to work with clay in his spare time he joined the Clay Club, 4 West 8th Street in Greenwich Village. In May of 1941 he had his first and only one man show of 37 original hand sculpted terra cotta “Whimsies”. The show was a sell-out; pieces were purchased by prestigious New York collectors as well as the Whitney Museum, the Syracuse Museum and the Metropolitan Museum of Art. The event garnered national publicity in magazines including Time, Life, Harper’s Bazaar and Art Digest.

Ganoksin is sponsored by
th Street in Greenwich Village. In May of 1941 he had his first and only one man show of 37 original hand sculpted terra cotta “Whimsies”. The show was a sell-out; pieces were purchased by prestigious New York collectors as well as the Whitney Museum, the Syracuse Museum and the Metropolitan Museum of Art. The event garnered national publicity in magazines including Time, Life, Harper’s Bazaar and Art Digest.

As America entered WWII, Sascha enlisted in the Air Force in 1942. He was sent to Miami where he spent several months as a mechanic. Eventually he was able to transfer to the Special Services Events Division, where he designed costumes and scenery for USO shows; work that was much more to his liking and better suited to his talents. Sascha created GI Carmen Miranda, a character he impersonated to entertain the troops. He put together a costume using an army blanket, and duffel bag decorated with cooking utensils as a headdress. Theater legend Moss Hart called his performance “the greatest sight laugh of this country”.

In 1946 he landed his first job in California, hired by Zanuck, the head of 20th Century Fox Studios and commissioned Sascha to design costumes for Betty Grable in Diamond Horseshoe. This started a seven year contract with 20th Century Fox Studios as a costume designer. His agreement with Fox Studios however, allowed him to start a small decorative arts studio/factory in West Los Angeles. ‘Sascha Brastoff Product’s Incorporated’ was so successful it grew to include staff artists and administrators and consequently ended his work with Fox Studios fulfilling only two of his seven year contract.

The grandson of John D. Rockefeller, Winthrope B. Rockefeller, took interest in Sascha’s work and he began an association with Rockefeller as financial backer and social circle promoter. With Rockefeller’s support he moved into a much larger facility on Compton Avenue in South Los Angeles. However, after only a few months of doing business in this facility it burned down.

With Rockefeller’s continued financial support he opened a much larger, state-of-the-art factory and studio designed by architects A. Quincy Jones and Frederick Emmons on West Olympic Blvd. in West Los Angeles in 1953. It had 35,000 square feet of floor space and the half million dollar facility covered a city block. 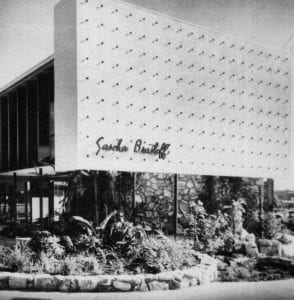 During the grand opening Hollywood celebrities such as Edward G. Robinson , Zsa Zsa Gabor, and Mitzi Gaynor made it the party of the year.

By the late 1950’s the company employed more than one hundred pottery workers.

Many Hollywood stars were among his customers including Joan Crawford and Donna Reid. It is said that Joan Crawford bought an ashtray and stated in a letter to Sascha that she would not let anyone get near the ashtray with a cigarette as she considered it a work of art. 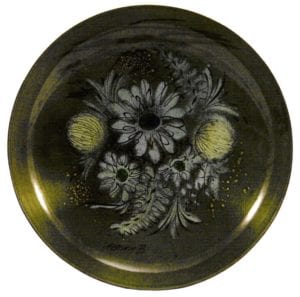 In the mid fifties Sascha was very busy designing metal sculptures, producing one of a kind commissioned pieces for Rockefeller and others, as well as design pieces for television programs. He made many public appearances at department stores, promoting his product lines and appeared on television decorating and talk shows. He even had exposure in movies; one of his elaborate metal fish sculptures was used in the Sci-Fi classic ‘Forbidden Planet.’

1961 found Sascha renegotiating his “deal” with his company’s financial backer, Rockefeller. Sascha demanded a percentage of profits rather than his lucrative salary. At the end of the year, he was presented with a bill for over $10,000, his share of the company’s losses.

For a variety of factors such as overconfidence from quick success, the company became overextended and began experiencing financial losses. This led to Brastoff suffering a nervous breakdown and resulted in him leaving the company in mid 1962. He became a recluse, debilitated by his condition and afflicted with agoraphobia. He entered into a period of personal reflection, and stayed at home primarily working with pastel and oil painting along with home studio made enamels.

The company continued to operate and produce his designs from 1964 to 1973 at a location on Yukon Ave. in Hawthorne, California. 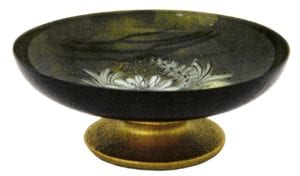 In 1965 friends convinced Sascha to produce again. He began working with new materials which included Styrofoam and resin. He also began working with magnesium sculpture and in 1967 he was commissioned to create the 13 foot gold plated crucifix and altar pieces for the St. Augustine By-The-Sea Episcopal Church, Santa Monica, California.

In the 1970’s Sascha worked with several companies who used his well known brand name to promote many lines of decorative objects including pottery for Haeger Pottery of Dundee, Illinois, scratchboard drawings on foil for Marina Metal arts Co. of Marina del Rey, California, jewelry for Merle Norman Cosmetics and a miniature silver sculpture set “Silver Circus” for the Franklin Mint of Franklin Center, Pennsylvania.

He continued to make custom fine jewelry from his home in the early 1980’s until poor health prevented him from keeping up his usual energetic and creative output.

After a prolonged struggle with prostate cancer) Sascha Brastoff died in Los Angeles in February of 1993 leaving a prolific volume of creative mid-century design objects.

Note: From 1940 until 1962 studio pieces executed by Brastoff were usually signed Sascha Brastoff with or without a date.

From 1947 to 1953 the signature Sascha B. was hand painted on the front of the design, usually at the bottom. These were painted by his staff.