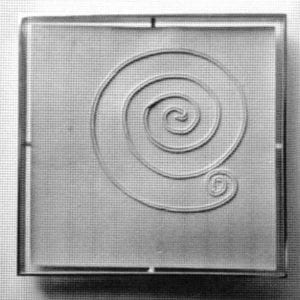 Two gold brooches arrive in the post – each bear an applied spiral on the surface not unlike Brancusi’s symbol in his portrait of James Joyce. One begins to make connections – Joyce frequented and died in Zurich, Frölich lived and died in Zurich. They are now connected by this sign of continuum. The brooches are among Max’s last pieces and arrived days after his accidental death on October 24, 1997. They attest to the fact that he lives through his work and will always be a part of the history of goldsmithing.

Born in Ennenda, Switzerland, December 16 1908, Max was a contemporary of Max Bill. They knew each other and, for a brief time, attended school together, but unlike Bill’s goal to be an ARTIST, Frölich always was content to be a silversmith. He loved working with his hands. From his childhood in the valley of Canton Clarus, where his father had a textile mill, Max was drawn to watching artisans and learning from them. Academic pursuits were never his. In 1924 he enrolled in Geneva’s School of Industrial Arts. There he learned to fabricate hollowware as well as to make tools. Frölich’s large copper and brass vase was exhibited in the Paris Exhibition of 1925, initiating a legacy which would eventually bring his work international acclaim.

In Zurich he learned to make jewelry while apprenticing in Heinrich Egg’s workshop, leaving there in 1934 to teach at the School of Applied Arts where he remained as a member of the faculty for 28 years. Frölich was one of the pioneers of modern jewelry. In support of his achievements The Golden Ring of Honor was bestowed upon him in 1964 by the Society of Goldsmiths in Hanau, Germany. His love affair with Africa began long before his trip to that continent in 1977, where he observed the casting of gold by the Ashanti in Ghana. Returning to Switzerland, he soon became primarily responsible for the resurgence and understanding of that technique in the Western world.

In 1994 while looking at unidentified African-inspired Swiss textiles at the Museum Bellerive, it occurred to me that these might have been made at the Frölich textile factory decades ago, remembering Max’s tales of his brother’s trips to Africa another connection was made. The Frölich romance with the Ashanti had its roots in his early days of childhood and continued in the spirit of his work and a collection of objects which accented his home. 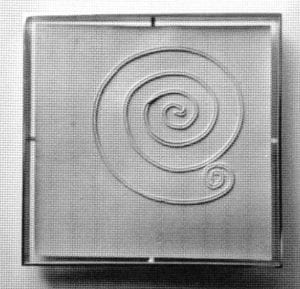 Max, like the late Joseph Beuys, loved America, and America loved him. He will be remembered by all of those who knew him, his devoted wife Ruth at the Haystack School of Mountain Crafts, and by his peers whom the couple befriended at SNAG conferences. For those of us whose memories hold the image of Ruth and Max Frölich appearing almost as one in their matching suits, recounting their journeys and experiences, we too, will become part of the symbol of the spiral brooch which he passionately and thoughtfully created. “Imagination works, find a sign for a personality,” Max wrote in a letter of June 11, 1997, in response to the Madeleine Albright project. On September 30 he pondered whether the spiral was an appropriate symbol for an individual of high standard. We know that Max Frölich found the sign which is indeed the standard bearer of his life and career.

All articles by this author
Previous Chinggis Khan: Art of Mongolia
Next Phillip Fike
Social media