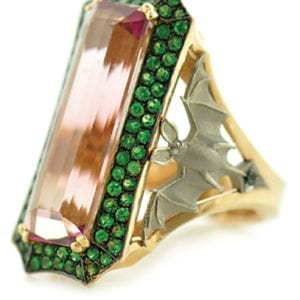 Ricardo Basta believes in melding traditional jewelry-making techniques with the high precision of computer design. Both sides of the equation are at play in his Vision Award CAD/ CAM Distinction winning ring, which is part of his Creatures Features line. This eye-catching piece was created in 18k yellow gold, with an emerald-cut pink tourmaline center stone surrounded by 88 green tsavorites. On either side of the shank, two highly detailed 18k palladium white gold bats spread their wings, accented with diamond-shaped appliqués and black diamonds.

As is often the case in Basta’s work, this piece began in an old-school way before evolving into its new-school final form. “I like to carve a wax first,” he says. “Once I get the style and design I want, it’s easy to replicate on the computer.”

The primary reason to go from wax to computer as opposed to going from wax to casting is Basta’s demand for high precision. “When I do a wax, sometimes I see that one side is not 100 percent equal to the other,” he says. “I’m talking just decimals of a millimeter in difference, but to me it’s big enough that it bothers me. With CAD, once you’ve created one side, the other side is automatically the same. I don’t use just one technology or the other. I like to have the technology fit the piece that I’m making at the time. A piece might be 50 percent by hand and 50 percent CAD, or 80 percent CAD, or 100 percent CAD.”

When the wax for his bat ring was completed, Basta didn’t just turn it over to his CAD team and walk away. He kept constant watch on their progress as they recreated the design using the Rhino CAD program. Working from the wax and under Basta’s careful attention, they transferred the piece by carefully measuring the elements and inputting that information into the program.

“I work very closely with my CAD people,” he says. “It’s not like they work all day and at the end, I check it; I check on it constantly, telling them, alter a height, change this, or change that, all to my specifications. I am changing things constantly. I’m not usually happy with the first draft. I like to improve.” On this piece, he says, his changes were minimal.

The CAD design process took roughly two days, with plenty of time given to the bat to make it as fully fleshed out, detail wise, as possible. “Doing the animals takes a little longer to get the beauty of it right,” he says. “You don’t want it to look flat, like a coin.”

The CAD designers did not just replicate the ring as a single piece. Rather, it was done in sections so that Basta could ensure that each element was exactly right, and properly cleaned and polished before assembly. The shank, top, the two bats, and the appliques were created on their own and only brought together for the final piece. Basta recognizes that this ring could, in fact, have been created as a single digital model rather than by crafting individual CAD elements, but that, he says, would have come at the cost of the kind of intricate detail he demands in his work. “You can do it in a single unit, but you’re not going to produce a quality piece,” he says. “It would be much cheaper to produce, but I’m well known for my quality.”

“I like to carve a wax first. Once I get the style and design I want, it’s easy to replicate on the computer.”

Not everything about the ring was done in CAD. The seats for all the tsavorites, which could have been painstakingly added in the file, were instead painstakingly done at the bench. “Both ways take time,” Basta says. “I like to do the setting the old-fashioned way. We cut all the holes, raise all the beads. I’m not saying it’s wrong to build them in CAD; I just like doing it this way.”

In addition, he says, he doesn’t expect his CAD designers to be versed in the intricacies of building seats and prongs. “Not all the CAD people are jewelers. I do work closely with my CAD people, but I also have jewelers and setters, and I work closely with them as well, so that what gets done is what I want.”

When he was satisfied with the onscreen model, he gave his team the green light, and after a 25-hour, high-tech build on his 3-D printer, it was time for old school craftsmanship to step in and help this newest piece in the Creature Features line take Flight.