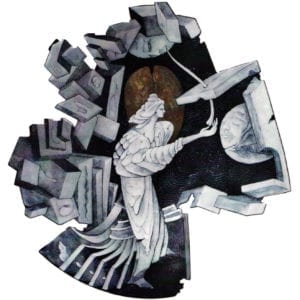 by Bernard N. Jazzar and Harold B. Nelson

In 1950 Kalman Kubinyi, an enormously talented and highly versatile artist, together with his wife, the prominent Cleveland-based enamelist Doris Hall, and their two children, Moisha and Laszlo, left their home in northeastern Ohio for exciting new opportunities on the coast of New England. They left behind a community where they had each grown up, attended school, and matured artistically. In Cleveland, their chosen medium – the art of enameling – was widely produced, regularly shown, and enthusiastically collected. Their move to Massachusetts offered the young couple a unique opportunity to grow creatively and advance their artistic horizons to a new national arena. Kubinyi captured his young family’s excitement about a world of expanding personal and creative possibilities when he wrote in his journal, “Our graphic phase was behind us ahead was a wonderful world of color fused in glass . . . painting with fire!” 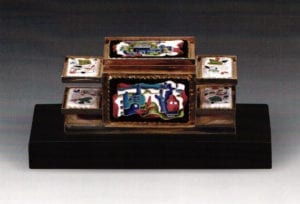 Rather than presenting one or two works by a wide cross-section of enamelists active during this period, Painting with Fire considers in greater depth the work of these fifteen artists who – through their leadership in the field, the significance of their artistic accomplishments, or their unique approach to the medium – exerted a profound impact on twentieth-century enameling. The exhibition includes a diverse selection of their work, ranging from large-scale panels and plaques to plates, boxes, and three-dimensional objects. While Painting with Fire focuses on the work and careers of these fifteen artists, biographies of thirty others who made significant contributions to the field during this period are also included in the exhibition’s catalogue. 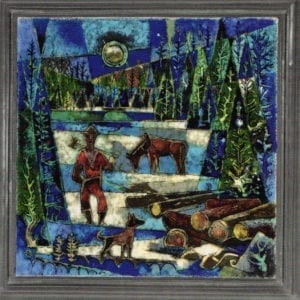 Painting with Fire and its fully, illustrated 288 page catalogue, explore the context within which each of these fifteen artists worked, examining the individuals and institutions that supported the development of enameling as a cohesive artistic movement during these critical years of advancement. The exhibition is divided into three sections: “The Early Years, 1930-1940,” which traces the origins and development of enameling in this country; “Advancing the Field, 1940-1960,” which explores the expansion of interest in and support for enameling; and finally “New Directions, 1960-1980,” which analyzes the ways in which American artists, highly experimental approach to process dramatically redefined and reinvigorated the field in the late twentieth century. In its early years enameling in America was shaped by three principal influences: the turn-of-the-century Arts and Crafts movement, particularly the work of the Boston school; Viennese modernism; and the venerable pictorial traditions of the French Limoges school. Over time, these three traditions gave way to provocative new experimental approaches to the medium. 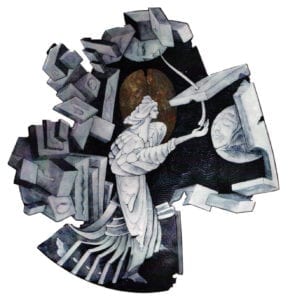 Between 1930 and 1940 Cleveland emerged as one of the most significant centers in the United States for producing, teaching, exhibiting, and collecting contemporary enamels. As interest in the medium spread in the 1940s and 1950s, however, areas such as Providence, Rhode Island; New York; Wichita, Kansas; Claremont, California; San Diego; and San Francisco became important centers of enameling activity.

Painting with Fire examines the role played by cultural and educational institutions throughout the country – particularly the Cleveland Museum of Art, the Cleveland School of Art, the Wichita Art Association, the Syracuse Museum of Fine Arts, and Scripps College – in advancing midcentury enameling in America. Throughout this period, enameling was regularly taught at the Cleveland School of Art; the Cleveland Museum of Art provided support by featuring new work in its popular “May Show” and by acquiring the finest work submitted to this annual exhibition for its own permanent collection; the Wichita Art Association advanced the field through its annual Decorative Arts and Ceramics Exhibition; and both Syracuse and Scripps supported enameling by showcasing new work in a series of important national ceramic exhibitions. This institutional support provided invaluable encouragement, visibility, and prestige for the fledgling field. 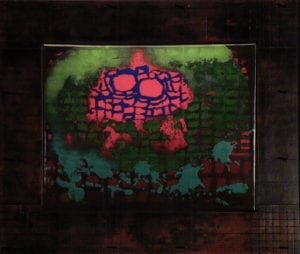 Painting with Fire investigates the ways in which the American Craftsmen’s Council, Craft Horizons, and the Museum of Contemporary Crafts provided support to enameling in this critical period of development. It also considers the support provided by major corporations-particularly the Ferro Enamel Corporation in Cleveland and the Bettinger Corporation in Waltham, Massachusettes – which enabled artists to reframe the very nature of the medium. Each of these pioneering corporations allowed enamelists – Edward Winter and Doris Hall, respectively – to use their industrial-scale ovens or kilns for artistic purposes. Through this unusual partnership, these artists were able to produce enamels of a size not previously possible. These partnerships led to public commissions for artists and a whole new genre of architecturalscale enamel murals for schools, libraries, and churches throughout the country. 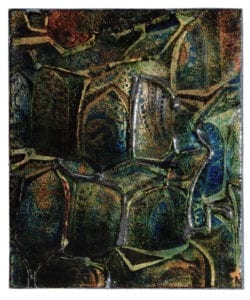 The publication accompanying the exhibition explores the populist foundations underlying enameling, examining the phenomenon as an outgrowth of Arts and Crafts philosophies and a reflection of postwar craft aesthetics. It examines how, while widespread practice may have broadened the medium’s appeal in the late 1940s and early 1950s, its increasing popularity unwittingly led to the marginalization of enameling in the 1970s when a proliferation of “hobbyists” began to diminish its status as a unique form of creative production.

Although it is a closely related field, enamel jewelry – except for a very few pieces – is not considered in this exhibition. While several of the artists featured – such as Mildred Watkins, Doris Hall, Jackson and Ellamarie Woolley, Harold B. Helwig, and especially William Harper (after 1975) – also created wearable forms of enamel, jewelry has its own set of traditions and practices that deserve fuller consideration than was possible in this exhibition and its publication. 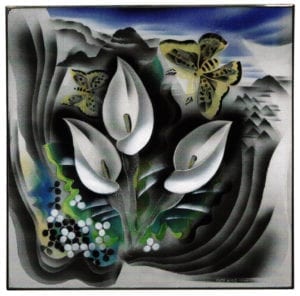 Organized by the Long Beach Museum of Art and curated by Bernard N. Jazzar and Harold B. Nelson, Painting with Fire will be presented in Long Beach from January 12 to August 19, 2007 with subsequent presentations at the Mobile Museum of Art, Alabama (January 25 – April 6, 2008) and the Cleveland Museum of Art (Spring 2009).

Painting with Fire: Masters of Enameling in America, 1930 – 1980 is supported through generous grants from Lynda and Stewart Resnick and the Resnick Family Foundation; the Windgate Charitable Foundation; and the Craft Research Fund, Center for Craft, Creativity and Design of the University of North Carolina. Additional support was provided by the Earl B. and Lorraine H. Miller Foundation, Roll International, Gregg and Beth Coccari, Richard and Cheryl Jazzar, Saul E. Levi and Marsha N. Levine, Ilene Resnick Weiss and Daniel Weiss, and other generous sponsors.

Notably, the fully illustrated catalogue accompanying Painting with Fire is the only book ever published to explore the field of twentieth-century enameling in this country from a historical rather than a technical perspective. The publication is available January 1, 2007 through the Museum Store, Long Beach Museum of Art in both hard and soft cover editions. To order, contact the Museum Store at (562) 439-2119 or museumstore@lbma.org.

Decorative arts scholars Bernard N. Jazzar and Harold B. Nelson are among the foremost specialists in twentieth-century enameling history in the United States. Jazzar is a curator for a Los Angeles-based private collection and Nelson is director of the Long Beach Museum of Art. They have been researching the field for over six years.