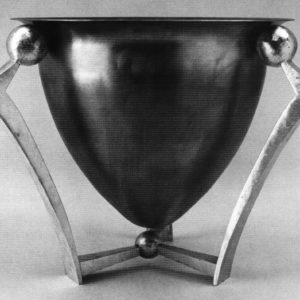 It may surprise some, judging from Tom Markusen studio output, that the production objects are handmade, without the use of dyes, props or molds. The objects are smithed straight from the forge, from red to black heat, from the mid-section outward.

Tom Markusen has developed systems and procedures for manufacturing and marketing that rival those of any successful entrepreneur; while behind his work, there is a desire to be recognized as an American holloware maker with integrity.

Surely one of the main goals of any aspiring metalsmith is to be able to earn a living making work by hand. Although this is a difficult road, it is one that Tom Markusen has traveled successfully. Fifteen years ago, Tom Markusen was producing around 10 objects per year. Despite successful exhibiting and teaching, he abruptly changed directions. 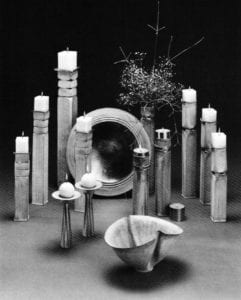 Today, Markusen’s studio creates between 30 and 50 objects per week. He employs four full-time smiths and maintains a grueling pace of four craft fairs per year. His regular accounts now top 100. New designs are continually developed and must successfully fit into the overall “Markusen style.” Some designs are produced in limited editions of 12 to 10, while others are open stock. Each piece made for sale is hand-stamped with the studio hallmark, design number and, if appropriate, the edition number.

Figure 1 shows one of Markusen’s production lines. As with any of his lines, it comprises a number of styles available in several different metals (copper, brass, nickel and sterling), with various diameters and a variety of heights. This photo shows a collection with verdigris oxidized patina on copper. The production bowls, candleholders, vases and plates are also available with a wide variety of surface treatments such as heat and verdigris patinas, chrome-black, nickel and sterling plates. Most of these are offered in unlimited quantities.

Markusen’s best-known line is the tubular/circular candleholders, bowls, plates and vases. The philosophy behind that production has a simple premise: a distinctly American, handmade holloware should be available to the buying public. One of the starting points was to identify, seamless copper tubing as a mid-century American invention, which became available in a wide range of sizes for the plumbing trade. The ability to create pleasant forms by hand, by American labor, and be able to sell them at competitive prices both in the United States and abroad has been Markusen’s challenge. 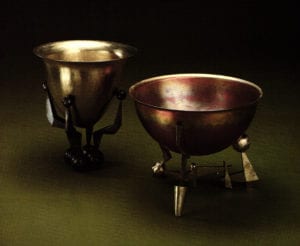 In order to meet this challenge, he developed a balanced approach to the business of craft. The technical side is the starting point, the essential core. It deals with esthetic choices of form and surface, as well as labor procedures and equipment. This fulfills the metalsmith’s direct creative needs. Tom Markusen has the desire to design and create functional/decorative items and to find suitable markets for them. In this way, he is part of the humanistic tradition that includes the GI-Bill artists and those “back-to-the-earth” youths of the 1960s.

Marketing seems to be an almost equally important aspect of being an artist today. It is concerned with price ranges, advertising, limited versus unlimited editions, annual trends in color and so forth. This is an area less dealt with in the education of the metalsmith. It is a process of trial and error that every artist must confront. However, the decade has brought a new business ethic to the craft world, and an understanding of economics and marketing can mean the realization of the craftperson’s dream. In Tom Markusen’s case, stylization and aggressive control over the marketplace have been keys to his success.

Beginning around 1976, Markusen began analyzing and organizing his workshop into a company that works and grows. In 1989, Professor Tom Markusen took a full-year sabbatical to develop new directions. The results were seen in a retrospective exhibition titled “A Decade of Metals. 1980-1990,” held at the Tower Fine Arts Gallery of SUNY Brockport this past fall. After a decade of building an identity for his holloware, Tom Markusen took this leave from teaching to allow himself time to explore several ideas. Working around a regular cycle of production and craft fairs, he first created six sculptures and later the prototypes for two new series. The sculpture provided new insights and options that expand the classic forms for which Tom Markusen is known. 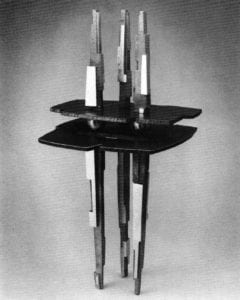 The initial goal for Markusen’s sabbatical was to create nine sculptures. Only six were actually completed. However, they provided the artist enough new information on forms, surfaces and combinations to move beyond the hammered, fluid forms of his hallmark style. These sculptures, died, Architectonic I-VI, (Figure 2) explore plane and level changes and new surfaces. The architecture of Frank Lloyd Wright was a main influence for these sculptures. An important factor was that they not be concerned with function or containing. In order to complete the series, he set up a sand-casting facility. The facility was later used to produce elements for sculpture and leg sections for the new bowl series.

The “floating” or “multi-leg” bowl series, (Figures 3 and 4) consists of three bowl types, or shapes, and a variety of sandcast brass legs. The basic premise was to lift the bowl up off the ground plane and relieve it of the necessity to stand alone by either having a flat bottom or an added foot. The Asian esthetic of displaying objects is evident here. Metalsmiths rarely are able to complete a holloware form without altering it for stability. Here, Markusen finally finds one elegant solution that lifts up the bowl to be admired for all its fullness and sensuousness. The copper bowls themselves were spun outside the studio by master spinner Bernie Towel, who has worked with Markusen for many years.

The legs for the bowls are the series’ amusing feature. Elements from the sculptures were isolated and combined into stylized units. Tom Markusen wanted to contrast the softness of the spun copper bowl with the bright, geometric and irregularly rough surface of the sandcast brass. Some of the floating bowls are offered with interchangeable legs, although this series is limited to an edition of 12 (per bowl type). These new features are in keeping with the wide variety of choices available within the established production lines. 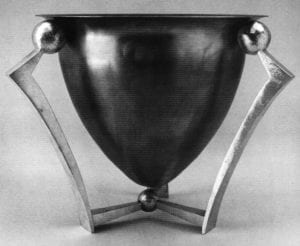 The “pattern” series (Figure 5, see front inside cover) is the most unrelated to Markusen’s previous work. It consists simply of very large sheets of copper or steel that have been bent and held upright by interlocking tabs. Beyond the vase and bowl, the bent and interlocking system is designed as a modular, stacking system capable of reaching 10 feet in height. Although these pieces were sparked by inquiries from architects and designers interested in larger works for open areas,

Tom Markusen had planned the project for some time. In the early 1970s Markusen purchased the tools of an entire sheet-metal shop that had closed its doors. The style and techniques used in sheet-metal work had long interested him, but he had not found the time to work in that direction. The sabbatical year provided him the opportunity to catch up to his creative ideas and place them in his repertoire. The prototypes for the two series have already been integrated into the artist’s production line offerings.

William Baran-Mickle is a metalsmith and is working on his master’s in art history at Syracuse University.

All articles by this author
Previous Ted Muehling: Sensual Punctuation
Next The Life Works of Carl Jennings
Social media