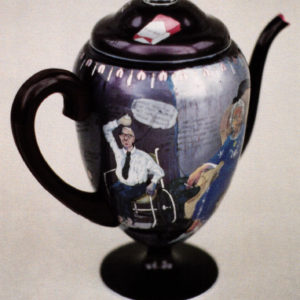 David Clifford, a recent graduate of California College of Arts and Crafts, has added a new twist to recycling. Seeking a different kind of interaction than the normal art experience encountered in a gallery, Clifford started mounting his lithographs and linocuts in frames purchased in thrift stores, and then re-hanging the prints back in a thrift store (“next to other frames, kitten or Jesus decoupages, and bric-a-brac”). The prints can then be bought for the same price as the original frame. Clifford says that all of them sell within two or three days. 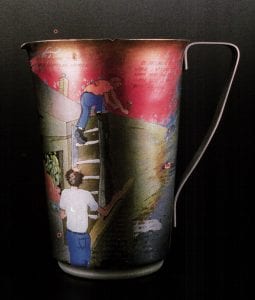 On learning how to anodize aluminum, Clifford extended his process into the realm of household objects. He purchases a second-hand aluminum article like a cup, saucepan, or a coffee container, and then anodizes an elaborate narrative scene on it. Usually, the subject matter is autobiographical. For instance, on Cough-fee, a revitalized coffee pot, Clifford depicted a narrative about the smokers in his family, and some of the rationalizations he uses to justify his own smoking habit. After he photographs the finished work, he sneaks it back onto the thrift store shelves. The object also contains a self-addressed stamped envelope, which Clifford hopes will encourage the buyer to respond with his or her opinions about the artwork. However, feedback from the marketplace has been disappointing so far.

Because the process is completed only after the original metalwork is sold, Clifford cannot exhibit objects in a gallery setting. Instead, he can only show photographs. Thus, the usual expectation of gallery-goers is inverted: the art audience gets the cheap imitation, while the thrift store shoppers get the real thing. 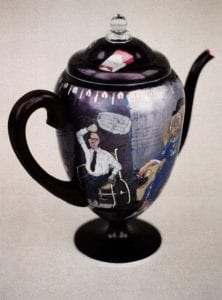 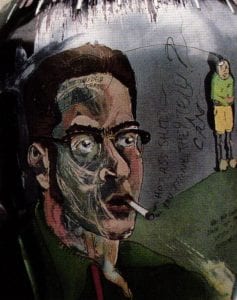 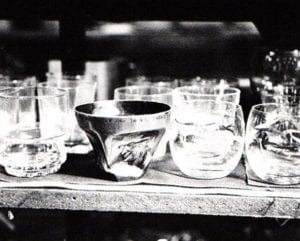 May you lie, cheat, and swear, Cheat the Devil, Swear by our friends and lie with the one you love”, 1994, etched and anodized portrait of my Grandfather, H. H. Clifford on aluminum placed in St. Vincent De Paul Thrift Store, Oakland, CA