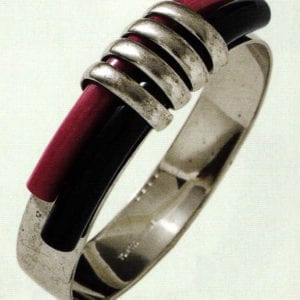 In 1898, Wilhelm Krische, owner of a factory that made history books and a stone printing shop, patented one of the first plastics. But he had no way of knowing that thiry years later, Coco Chanel would take the “milk stone” Krische had developed and would help it make a final breakthrough in the costume jewelry industry. 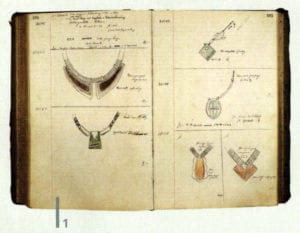 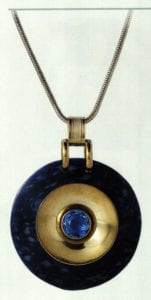 Avant-garde design from the early 1930: a round pendant made of cloudy galalith, yellow metal and facetted glass stone

Galalith – the word is formed using the Greek words for milk and stone = milk stone – that was used in the nineteen twenties and thirties as a jewelry stone was, as is so often the case in the world of inventions, discovered by accident. In 1897, the Hanover-based factory owner Wilhelm Krische was commissioned to develop white school boards that could be wiped off but that would not burn, as German teachers no longer wanted to write on blackboards using white chalk, but instead wanted to get their message across black on white. Although critical experiments with the milk protein casein were in vain with regard to the original commission, the horn-like plastic from the element of milk had been discovered, even if no one really knew what to use it for. Krische put the finishing touches to his discovery in cooperation with the chemist Adolf Spitteler. They even changed and improved its characteristics by treating casein with formaldehyde. 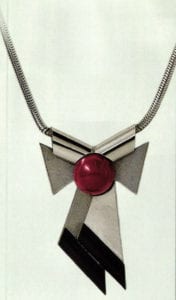 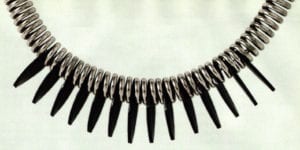 The numerous advantages of galalith soon became apparent. It was fast and inexpensive to produce and was also easy to process. The milk stone could be cut, drilled, embossed and even dyed in any way without difficulty, thus producing gemstone imitations that looked strikingly real. No other plastic at the time could compete with this wealth of favorable characteristics. It is therefore hardly surprising that huge quantities of milk literally flowed into the production of galalith at the start of the new century: in 1913 30 million liters of milk were used to produce galalith in Germany alone. It was marketed in the form of boards, pipes and rods. 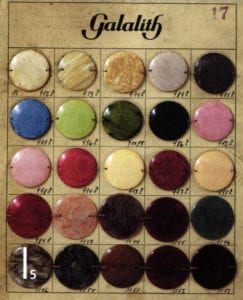 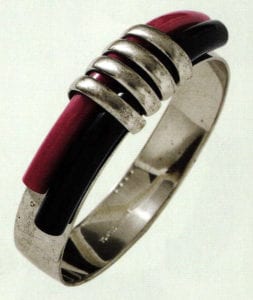 A bangle made of brass and two colored galalith elements. There is the signature of “Tchechoslovaquie” in the inside of this piece of jewelry indicating a business relationship with that Eastern European country

Galalith first left its mark on society in the form of objects of everyday use such as buttons, belt clasps or combs. When fashion designers in the twenties and thirties increasingly turned to costume jewelry and “false” jewelry became acceptable even in higher social circles, the milky plastic experienced its heyday. 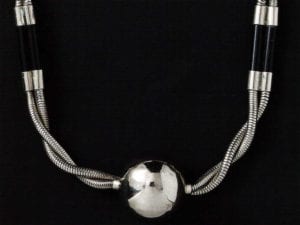 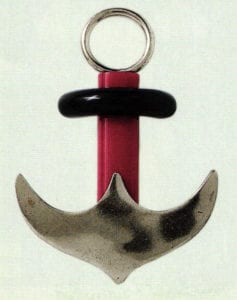 New materials and manufacturing technology lent wings to the creativeness of the fashion and jewelry designers, led by Coco Chanel, an in many ways revolutionary figure of the time: in 1926, she created the legendary “small black dress” that suited neither colliers nor diadems. Instead, fashion turned to pretty, eye catching, witty, not too expensive and frequently exchangeable jewelry that complemented the fashion. Coco Chanel was by no means the inventor of costume jewelry, but it was she who freed it of its bad reputation as a shabby imitation and transformed it into something truly independent. In this way, galalith, which was practically ideal for the production of costume jewelry, finally broke through into the fashion industry in 1926/28. In general, understanding for the rebirth of culture, society and design in this decade facilitates understanding the meteoric rise of this non-precious material.

Yellow galalith was an amber imitation. A necklace suspended by Jacob Bengel from 1932

Plastic in its most beautiful form

During the nineteen twenties, Auguste Bonaz, a French merchant, was one of the first to produce unusually beautiful chains and brooches made of galalith, chromium and bakelite. In Germany, the production and processing of galalith blossomed, especially in the metal ware factory of Jakob Bengel in ldar-Oberstein. From 1924 onwards, the factory produced chromium-galalith jewelry in the highest artistic quality, which developed to become a top seller in the wake of Chanel’s costume jewelry trend. At the time, Jacob Bengel was particularly expert in the aesthetic combination of galalith with the industrial material chromium, which was also fairly recent at the time. Cool chromium with its silver-grey sheen was juxtaposed with the soft, matt glow of the vivid plastic galalith. All kinds of geometric elements made of galalith were contrasted with the chromium-plated chain parts: circles, spheres, skittles, triangles, rhombi and cylinders in finely coordinated colors or skillfully chosen contrasts were turned into items of jewelry that were tailor-made to suit the demands of fashionable women. Simplicity and clarity were characteristic in terms of both design and in the technical processing of the galalith. The so-called “brick tile chains” were typical of the Bengel production; their numerous rectangular, small, overlapping and entwined links joined together to form a tile-like pattern. Some of the links were painted on both sides in different colors, so that the wearer could simply turn the chain over to achieve a different effect.

The decline of a material

Galalith, the material made of milk, reached its absolute golden age shortly before the Second World War. Shortly after this, the production of galalith for jewelry purposes was initially restricted and then even banned. Upon the outbreak of war, milk was needed primarily for daily nutritional requirements, while the residual production of galalith was primarily for electro-technical purposes. After the end of the war, the material was suppressed by modern plastics that could be cast and heat-molded. 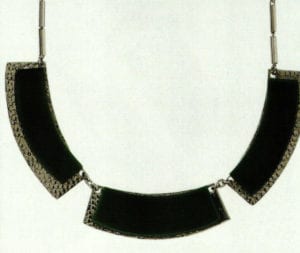