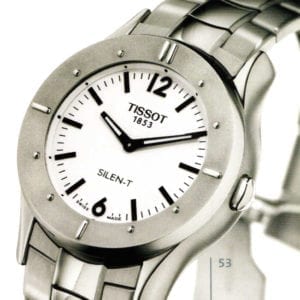 A New Face for Time

What does time look like? It has a round face with two hands that go round incessantly. But for creative people, that’s much too easy. And that’s why watchmakers and designers are coming up with entirely new faces and giving the often amazingly mechanical clocks a new appearance. 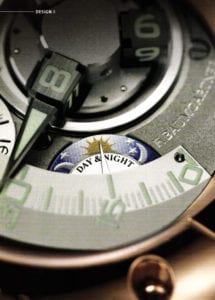 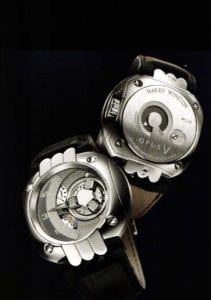 Mechanical miracle: “Opus V” by Harry Winston, created by the watchmaker Felix Baumgartner. You can read the hour from the block that has combined with the retrograde minute hand on the left-hand side.

Two hour hands, plus a second hand, or a whole series of different hands like chronographs that’s just not extravagant enough for Dirk Hiligruber. He is the boss of the watch brand Otium and he is even bored if the little rods lust go around in circles on the face of the watch. He is an entrepreneur with a pronounced penchant for design and technology who thinks “clockwork mechanisms should be able to do more”. That’s why he came up with an entirely new idea: little steel balls show the time. All of Otium watch models have this peculiarity and each has a different way to translate this idea into reality. You discover four cross-shaped slits on the face of Sphaera that are assigned three hours each. There is a little ball in each of the slits that moves along these numbers. The only mystery is which ball shows the right time? And that’s where this little trick comes in. First of all, you look for the slit showing the outermost ball. Now, if you go one slit further in the clockwise direction, that’s the ball that marks the present time. For some clocks, you need a whole set of instructions. 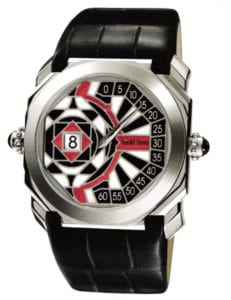 Extravagance for watch fans: The “Octo Minute Repeater” by Gérald Genta. Repetition of minutes (with an acoustic time display) and a retrograde minute display with automatic clockworks in a white gold casing 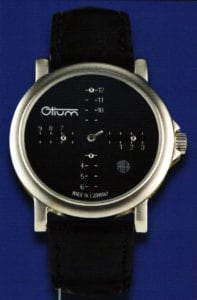 The ball shows the time: You read the right time with the “Sphaera” from Otium by going clockwise one slit further from the slit where the outermost ball is located. Minute display in the center and automatic clockwork 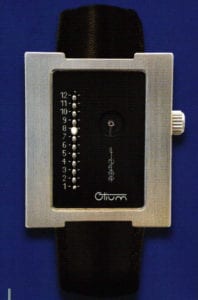 The time shown as a straight line: A colored ball on the “Linear” from Otium shows the right hour. Automatic clockwork in stainless steel casing

These days, there is a wide variety of displays for watch fans to choose from. But for the sophisticated connoisseur, there is only one choice: the youngest star in the firmament of haute horlogerie, the Opus V model from Harry Winston. This name has a magical sound to it because he is known as the jeweler to the stars. But, among watchmakers he is still a young man, and he still has the talent to create new ideas. Every year they send out an outstanding independent master watchmaker to create new and unique watches. 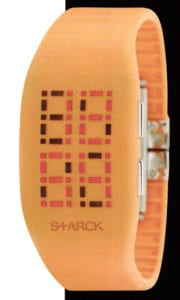 A futuristic watch from Fossil: Star designer Philippe Starck came up with a watch with LED technology. When you press a button on the side, a light shining through the plastic of the casing and strap displays the time or date 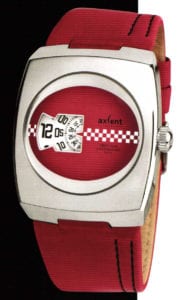 The breathtaking champion: “Electro” form Axcent quotes Formula 1 with a stylized starting/goal flag and a “speed meter” as its time display. Quartz clockworks in a stainless steel caisng

The young Felix Baumgartner was called upon to create the fifth and presently last edition of the Opus series. He designed a 3-dimensional time display by inventing satellite time, as Harry Winston calls his unusual system. Its main element is three miniature dice that go around on the face in circles like satellites. Each dice has a number on four of its sides. There is a retrograde minute display on the left half of the face (see the information box) You can see the hour on the upper side of the dice combined with the minute hand while the mechanical clockworks provide the needed energy. What all of these wheels and gears do is stunning and amazing. 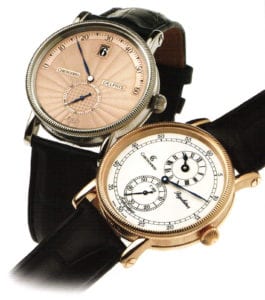 “Delphis” (on the left-hand side) from Chronoswiss is the first mechanical wristwatch that combines retrograde, digital and analog displays. The “Régulateur Automatique” is next to it with equal status on its decentralized hour hand. The casing is in steel or gold 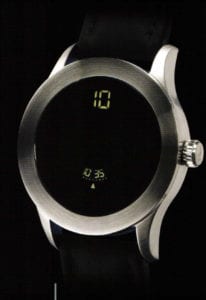 The most fascinating form of reductionism: With Jörg Schauer’s “Digital 02”, a large number shows the hour and you can read the minutes below. Stainless steel casing with automatic clockworks 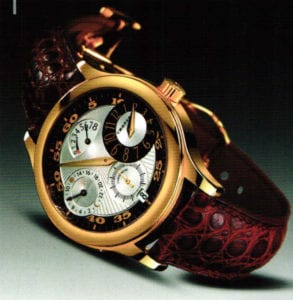 The hours, minutes and seconds on Chopard’s “L.U.C. Quattro Régulateur” have a lot of room. You can read the the hours on an auxiliary face at 3 o’clock, the minutes from the middle part and the seconds at 6 o’clock; power reserve display at 12 o’clock and the second time zone at 9 o’clock. Hand-wound clockworks and yellow gold casing

It’s not only Otium’s watches that are mechanically driven. Sphaera’s clockworks move a disc under the face that a tiny channel is milled into. As soon as the disc starts moving, the balls wandering over the slits on the face are in this curved channel. Other unusual watches are based upon mechanical clockworks that either automatically get their energy from the motion of its wearer or by being wound up. And it’s incredible everything you can do! There are digital displays where you can read the time through a little window (by Jörg Schauer), regulators (see the information box) and retrograde displays, each trying to top one another in diversity and original design. 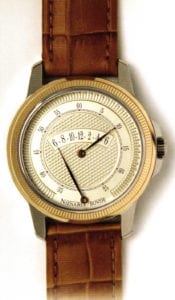 Two little hands with a major effect: “King Size Retrograde” by Rainer Nienaber with retrograde hours and minutes displayed from the middle. The casing is in steel and gold with hand-wound clockworks 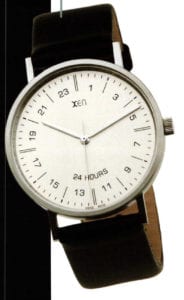 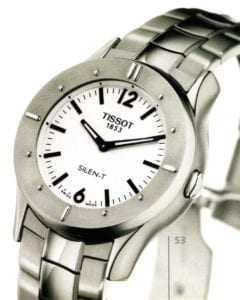 It only looks like a normal watch: You can set and read the time and alarm on the “Silen-T” from Tissot by pressing the crown and then touching the watch glass and the lunette. Casing and strap in stainless steel

Watchmaker Rainer Nienaber waxes lyrical about the opportunities: “l can go entirely new avenues in designing watch faces. There are no bounds to my imagination.” Retrograde displays are indeed an exciting challenge for his technical skills. But the watchmakers are also aware of the fact that persons wearing watches are challenged by unusual time displays. Nienaber admits that “you do have to get used to them. You have to change your habits entirely. But customers who buy these models value extraordinary timepieces and enjoy the attractiveness of their special timepiece every time they look at the watch”. Dirk Hillgruber also knows that “if you’re wearing an Otium watch, you’ve got your own time”. And it’s true: anybody trying to steal a glance at your watch without knowing how they work will go away empty-handed. And, besides, you’ve always got something to talk about because people will always be curious about them.

All articles by this author
Previous Wolf-Peter Schwarz: When It’s Night in Helsinski
Next Olaf Martens: Masks and Facades
Social media