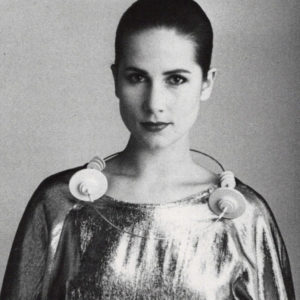 This exhibit, which originated at the Victoria and Albert Museum in London in 1982, will be traveling for two years throughout the United States. The pieces included in this collection, mostly metal and ceramic jewelry, span about 13 years of artistic development. There are approximately 90 pieces to explore here, including rings, pins and necklaces, some of which were done in the artist’s own studio and others in collaboration with Wedgwood.

Wendy Ramshaw is one of the few contemporary artists working in the craft vernacular who has chosen a high degree of technical sophistication, and, at the same time has successfully maintained a humanity and delicacy of scale and proportion. From this show it is immediately clear that a striking transition of shape and color exists throughout this body of work. Further, each element within a composition has a finely tuned interrelationship of parts. 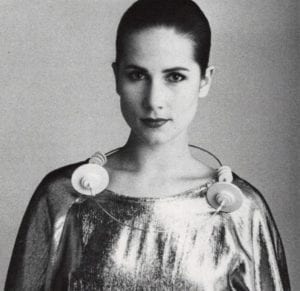 Wendy Ramshaw is a native of Great Britain and currently lives and works in London. Her formal training as an artist began in 1956 at Newcastle-on-Tyne College of Art and Industrial Design. In 1960, while studying for a teaching diploma, she discovered the decorative quality of etched copper plates. At that time, she considered her fascination for making ornaments a creative medium for children. In the later 60s she and her husband, David Watkins created a line of fashion jewelry under the name Something Special. These pieces were designed to accommodate Op Art trends in the fast-paced fashion world. Made of paper, sequins and colored foils, they were short-lived, however, they represented an impulse for self-adornment. Out of this period of exploration Ramshaw developed a desire to explore metal.

Out of the fashion jewelry came a deliberate yet sensitive style for which Ramshaw is well known, for example in the multiple ring set, These lathe-turned pillars are in fact miniature sculptures, which although only 3″ in height command an architectural presence. In this show there are several varieties of these rings, either in plexiglass or nickel, accentuated with bands of champlevé enamel and gemstones of amethyst, moonstone and peridot.

In 1978 during a trip to Australia Ramshaw began to incorporate decorative additions of emu feathers and ceramics into her jewelry. These softer materials caused the work’s geometric silhouette to soften and its imagery to become more primitive, even aboriginal. Several pieces shown here represent this whimsical and more carefree delineation. Even her line studies turned away from the technological inclination which had here-to-fore dominated her work. With white ceramic Ramshaw began to create soft geometric forms. In Large Disk on a Hoop, for example, pink and white Jasper floats on the shoulders of the wearer. 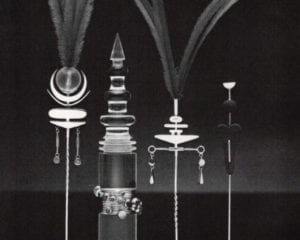 When asked that year by the Victoria and Albert Museum to participate in a loan exhibition, Ramshaw seized the opportunity to further refine her beads, using a lathe. She approached Wedgwood with the idea of a collaborative venture which would allow her the opportunity to explore a full palette of ceramic colors. Although most of the work made use of the well-known Wedgwood blue, Ramshaw also explored blacks and whites. With great success she combined gemstones in blues, oranges and purples with matt ceramic surfaces. and the result was an unexpected vibratto.

Her attention to mechanics should not be overlooked, Each piece represents a careful series of joinery allowing it to be flexible and wearable. Further, Ramshaw has devised the means by which her work can be enjoyed when not worn, such as the ring pillar and bead spindle. The wearer can also rearrange the pieces on a neckring to create a variety of shapes and colors.

What is most interesting about Wendy Ramshaw’s career is how she has combined the different parts of her artistic development into her work. The results are a highly interactive series of symbolic pieces. It is obvious that for Ramshaw each piece triggers a series of possibilities, and through these explorations she has successfully modified the many details and mechanisms of her vocabulary.