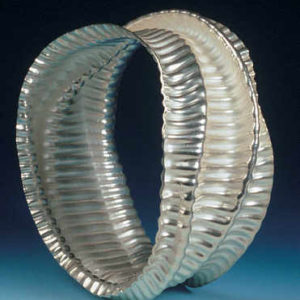 The jewelry industry has seen a veritable flood of new technologies in recent years-from CAD/CAM and laser welders to new alloys and Precious Metal Clay (PMC). And after a tentative start, jewelry designers have begun to embrace them.

The result has been designs both simple and sophisticated, clumsy attempts and elegant results. Critics have derided the new technologies for producing jewelry that’s sterile or amateur, while proponents argue that various technologies will forever change the way we make jewelry.

As in so many things, the truth lies somewhere in between. It is perhaps unsurprising that the first forays into using new technologies produced mostly simple designs, as artists concentrated on mastering the new techniques involved. But as the level of technological expertise has increased, the designs have become more sophisticated-and artists have begun expanding the boundaries of jewelry design.

Technology is providing today’s jewelry designers with the tools to create pieces once possible only in their imaginations.

Seeing Design in a New Light

For some artists, the addition of a new technology opens their eyes and brings a new design direction to light. Chicago-based jewelry designer Paul Klecka credits CAD/CAM as the inspiration for his newest line, a lattice of diamonds that seem to hang in air (see photo on previous page). Built upon his trademarked de-signs, the “Floater” and “Sequence Floater” series of diamond jewelry, Klecka’s new idea came to him as he was experimenting with those earlier designs in the Matrix program by Gemvision. “I saw that if I put a little prong between each gemstone at a tangent point, it locked them together, visually and physically,” says Klecka. “I realized I could create a surface of gemstones, where the visual effect is one that emphasizes the gemstones and de-emphasizes the metal that supports them.”

Klecka has patented the design, as well as two others that derive from the original approach. “I don’t think I ever would have come up with the idea [without CAD/CAM],” he remarks. “The interesting thing for me is that with this particular concept of lattice set, it could be done by hand, but it would take forever, and it would be a real pain to do. The scale is so minute, and the tolerances so perfect, achieving that by a hand process would be extremely difficult.”

The very possibilities new technologies offer can be a source of design inspiration, says Cynthia Eid of Lexington , Massachusetts . “Exploring the possibilities of a new tool often leads to new design ideas that would not have occurred to me otherwise,” she notes. “Sometimes a design or idea will lead me to learn and explore a new technique in order to accomplish that vision. And conversely, there are other times when playing with a new tool leads me into new design areas.”

Eid’s work has drawn heavily on the forms made possible by the hydraulic press and deep draw tooling. “My work has evolved a lot through becoming familiar with the hydraulic press and being involved with the development of new tools to be used with it, such as synclastic and anticlastic bracelet tools, and the micro-fold brake, [a tool used for folding metal],” she says. “Deep draw tooling makes possible seamless cylinders that can be used for rings, bangle bracelets, lockets, and container pendants, as well as stamp boxes, goblets, bowls, vases, or vessels. Dies can be used in the press to accomplish amazing one-of-a-kind work, as well as [production pieces].”

New technologies can also be applied to old processes to give the artist freedom to experiment. Jewelry artist Brenda Nesheim-Fuller of Mason City , Iowa , has found that the unique qualities of the laser welder have made her favorite approach to design more practical. “The technology allows me to change my mind on a design,” she says. “I tend to design by the seat of my pants. I don’t draw my concepts very well, so I usually work with an idea and see where it takes me.”

This approach allows her to experiment and gives her creative freedom, but it can cause construction problems. “Some-times I find I have gotten ahead of myself, and need to solder something after I have set a stone or made access to the area difficult,” she says. “Several years ago I would have to spend a lot of time ‘backing up,’ and some projects would be a loss from a practical standpoint. Now I can send my design to a laser welder and the problem is solved quickly and efficiently.”

New technologies have also allowed jewelry designers to create pieces they might once have shelved as too difficult or even impossible. Jeffrey Everett of The Jewelry Design Studio in Fairfield , Iowa , became interested in CAD/CAM because of the increased level of detail he could incorporate into his designs. “The level of detail I’m capable of achieving now simply can’t be done by hand,” says Everett . “I used to make tie tacks with fancy lettering and I was really incapable of creating the letters in high enough detail with saw blade and file. Now I’m able to produce true 3-D objects with lots of details.”

The laser welder and new heat-treatable alloys have made Minneapolis-based designer T Lee’s vision a reality. “When I first learned to weave, I started weaving fine silver to learn the technique, then I moved to 14k wire, which was way too springy, then to 18k, which still seemed not to be malleable enough,” she says. “I personally don’t care for the color of 22k, so I [tried] traditional 24k, which was so malleable and soft that it would stretch and ding up and wouldn’t polish. So I was a little frustrated-until I accidentally bumped into a company called PureGold.”

The PureGold heat-treatable 24k gold microalloy proved to be the solution for T Lee, and was later joined by heat-treatable platinum alloys in her work. But while the heat-treatable alloys offered both malleability and hardness, they had their own limitations. “I can solder the wires down and age-harden [the alloys after soldering], but the wire stays much healthier and hardens much more successfully if I don’t ever completely anneal it with a torch,” T Lee explains. That’s where the laser welder comes in.

Laser technology was the final bit of the equation that made the whole project come together. “The welder was what really allowed me to do more complicated weave patterns,” T Lee says. “I can mix the platinum and 24k heat-treatable alloys and tack down the ends as I go, so that I only need to age-harden once.”

For her current designs, soldering isn’t even a viable option. “With the real rudimentary [designs] I started with three years ago, I’d solder only once-I’d go in fast with an itty bitty tip on the torch,” she explains. “But now I’m doing so many overlays and so many complicated joints, that to go in and out with a torch that much would just totally defeat my materials.”

When metal clay was first introduced in 1994, it was greeted with enthusiasm by some and suspicion by many others-especially classically trained jewelers with hard-won fabrication skills. “Traditional metalsmiths who like to smack the metal with a hammer tend to look down their noses at this material,” says Cape Coral, Florida-based glass and PMC artist Barbara Becker Simon. (She presented a talk entitled “PMC: We’re Serious About This” at the 2004 conference of the Society of North American Goldsmiths in St. Petersburg , Florida .) “They say it’s cheating, that it’s ‘Mickey Mouse,’ that it’s not metal. They’re not really seeing the fact that in the end it’s metal, and the end [goal] is to make a piece of jewelry or metalwork. It’s not necessarily important how you get there-the important thing is to make an interesting piece.”

Although some traditional jewelers have added PMC to their repertoire, many of the material’s most enthusiastic supporters have come from backgrounds in other mediums. “PMC is so user-friendly: you don’t have to have two years of graduate school and three years of training,” says Simon. “People with various backgrounds-jewelry or clay or no [craft] backgrounds at all-will discover this material and find an application that will be useful for them.”

With their artistic sensibilities honed by other fields, these artists often bring a fresh perspective to design. “They’re not constrained by the traditional jewelry boundaries of either technique or design,” says Simon.

Jewelry artist Sue Dorman, an art instructor at Loyola Marymount University in Los Angeles , began using CAD/CAM when she teamed up with a mechanical engineering professor to apply for a grant from the National Science Foundation. After receiving the grant, the pair taught a combined class of art and engineering students. “I found the combination of engineering students and art students was really good for both,” she says. “The engineering students had trouble thinking outside the box, while the art students want finished product immediately and didn’t have patience to go through tedious and methodical steps to get there. So both of them had a lot to learn from each other.”

As new technologies open up design possibilities to bench veterans and draw new talent into the arena, the boundaries of jewelry design are likely to be expanded further. But, as Klecka points out, it isn’t the technologies that will create those new designs-it’s the people who use them.

“If you can’t imagine the design and you’re simply a draftsman drawing things, you’re going to get very static looking things,” he says. “What sold me on [CAD/CAM] is that it reflects exactly the way I think about designing. If I’m going to create a ring, I have to imagine it completed in my mind-I see it in my mind, I can rotate it, see the stones, the whole thing. Then it’s just a matter of expressing that and getting it out from the conceptual to the physical realm. Whether I do it with a pencil or a mouse doesn’t matter.”

As even those skilled in the new technologies point out, technology is just a tool; it can’t replace a talented designer with vision. However, it can-and is-expanding the limits of what’s possible for that talent to create.