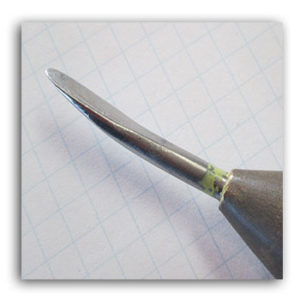 Down on your bench, look: It’s a file. It’s a bur. It’s Super Tool! At first it seemed so ordinary. You went to use it for a project you were working on, but for some reason it didn’t work so well. Maybe it didn’t allow you to get at the angle you needed, or to fit in a tight space.

Frustrated, you tossed it aside and glared angrily at it for letting you down. Then you started thinking about why it didn’t do what you needed it to do. Was there a way you could make it work? Inspired, you set upon it like a mad scientist in his lab, and before you knew it your tool had become Super Tool, capable of doing what was impossible just moments before.

This month I spoke with four jewelers who have had this experience. Read about the problems they faced in their own shops and how they modified their ordinary tools to become super. And while these tools may not help their owners leap tall buildings in a single bound, they will help them accomplish things more quickly and easily. They may even inspire you to go a little “mad scientist” yourself.

Flip through the pages of any jewelry tool supplier and you’re likely to see several pages filled with burnishers. They come in all different sizes and shapes. Despite the variety, sometimes there isn’t one suitable for the job at hand. At least that’s what Judy Hoch of Marstal Smithy in Salida, Colorado, has found.

Not finding what she wanted commercially available, Hoch decided to create her own. “I took a common 16 penny nail, heated it up, and pounded it pretty flat,” she explains. “I bent it a little bit and shaped it on a grinder so it has a thumbnail shape. It measures a little over 4 mm thick by 5 mm wide, with the end about 0.6 mm thick. It’s perfect for getting down close to a stone while burnishing. And it’s great for reaching very, very small burnishing areas.”

Hoch created a handle for the tool using a 3/4-inch-thick round piece of wood that she turned on a lathe. “It’s a narrow thing, but the small handle is sized exactly right for my hands,” she explains.

And the tool’s use goes beyond burnishing. “Jewelers get a lot of stuff stuck,” says Hoch, who cites that the tool can be used to remove a stone from a bezel that isn’t ready yet or from a piece that needs to be repaired. “It’s also pretty good for cleaning your fingernails but what I use it most for is to burnish the top of a bezel. It’s one of my favorite tools—they’ll bury me with it,” she says.

David Olmsted of ALDavid Custom Jewelers in Gettysburg, Pennsylvania, admits that his modifications aren’t anything earth shattering, but the tools he modifies become his favorites.

He has what he calls an “old school un-setting stick,” which basically consists of a steel bar with different sized and shaped notches cut into it. Although the tool did its job adequately, Olmsted found that it often dug into mountings when he was removing stones. He realized that there had to be a better way.

“I took a pair of pliers and cut a small groove in the top jaw and created a nice finished hook on the end,” he explains. “On the bottom jaw, I ground it round, put a radius on it, and polished it so when it leans up against jewelry, it doesn’t mar it. 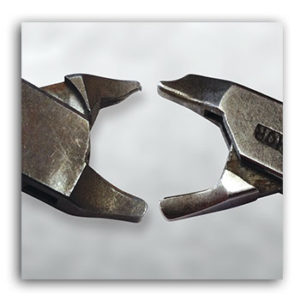 “To use them to unseat a stone, I take the top jaw with its tiny hook and grab the whole face of the prong but without touching the stone,” he continues. “I rest the bottom jaw on an area of the mounting that creates a cantilever effect. I close the pliers over the prong and gently pull the prong back.”

He liked his modified pliers so much he’s modified additional pairs to use with extra small prongs and others that are good for bezels or larger prongs. “It seems so simple, but they work like a champ,” he says.

When Hoch bought her Handler Super Sucker vacuum dust collector, it came with a fish-mouth attachment that measured about 14 to 15 inches wide and had a 4- to 5-inch opening. Because the attachment needs to be close to where work is happening, Hoch would have to clear off most of her benchtop to accommodate it. 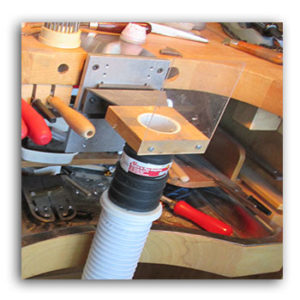 “It was large and inconvenient,” she says. “It was also not really effective because the area of intake was so large. I would have it on my benchtop while I was working at my bench pin, and it didn’t collect material well enough.”

To create a more effective dust collector, Hoch began by disposing of the fish mouth and attaching a piece of PVC pipe to the vacuum tubing. She then created a new bench pin from a piece of 3/4-inch-thick wood with an opening to accommodate the end of the vacuum hose, which rises up underneath the pin. “It’s unbelievably useful,” she says.

To avoid anything from falling down the tubing, Hoch inserted a mesh screen into the mouth of the tube. “Otherwise, anything that you drop goes down into the vacuum and you have to dig it out of the dust bag,” she says.

While she was modifying things, she also took the opportunity to add a Plexiglas shield to the front of her new bench pin. “If you’re right-handed, the flex-shaft just throws everything at you,” she explains. “The shield keeps anything from blowing onto me.” It also keeps her workpiece positioned closer to the suction: “I’m surprised at how little material hits the shield.”

And when she’s done using the vacuum, she can easily swap out the bench pin for another.

Whenever you’re working with gemstones at the bench, it’s always wise to take a good look at them before you begin the project. David E. Lee of David Lee Jeweler in Mason City, Iowa, follows this advice but initially found it difficult to hold the stones steady and securely enough to get a proper and thorough look at them.

The answer to his problem was already at his bench. 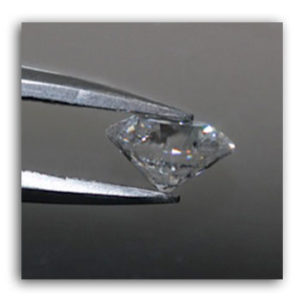 “I took a pair of diamond tweezers and bore a hole near the tip of one of the jaws that would accommodate a stone’s culet,” Lee says. “I can hold the stone by the culet and spin the girdle to check for damages, features of the stone, or any engraving.”

But he wasn’t done there. 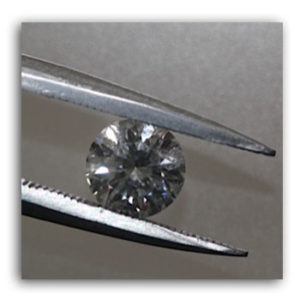 “Deeper in the jaw of the tweezers I cut an extra deep groove on either side so that I can securely grab stones to hold under the steam cleaner,” he says. “The grooves are too centered in the tweezers to use them to hold the stone to view, but for cleaning the stones they’re great…they hold onto the stone pretty tight.”

To create seats in wax models, many jewelers use a bur in their flex-shaft to quickly clear out material. But the rotary action of the flex-shaft makes it all too easy to remove too much material from the wax. Seeking a better tool for the job, Lee looked no further than the X-Acto knife on his bench. 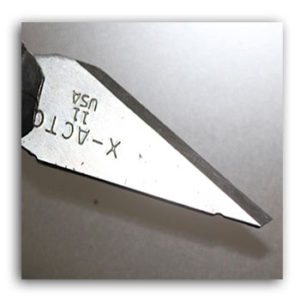 “I took my X-Acto knife #11 blade and snapped off the tip and then ground it back about 1 to 1.5 mm at a 45-degree angle,” he explains. “I use it at my wax bench for cutting seats. I insert the knife and use the new angle to drag it around the hole to create a step or seat for a stone in the wax. 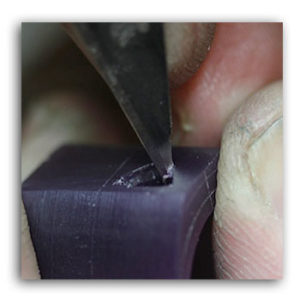 “I’ve used burs to mill in the past, but everything happens so quickly,” he says. “The knife seems to work best for me because it allows me to peel off tiny bits of wax in a controlled manner.”

They say that necessity is the mother of invention, and Patricia Tschetter of Tschetter Studio Inc. in Dallas would certainly agree. She wound up with a tool she didn’t know she needed, made from a tool whose original purpose she still doesn’t know.

“I had gone to North Carolina to teach, and I stopped at a roadside antique stand,” she says. “I saw this steel tool and I wasn’t sure what it was. The clerk thought it was used for clocks. It was steel and $8 and though I didn’t know what I would use it for, I bought it. 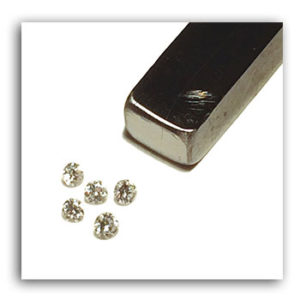 “The tool sat on my bench for a long time,” she continues. And then one day she finally found a use for it.

“I flush-set a lot of 1-point round diamonds,” she says. “I would create my seats and had been taught that if you put [the stone] in place and pushed hard on it, it would pop into place. I used an old mandrel [to push the stones] but it was too small for these 1-point stones.”

“I tried out the tool,” she says, “because it’s steel it wouldn’t hurt the diamonds, and it has a long handle to hold onto. It popped the diamonds right in.”

Although she had found the perfect use for her new tool, it did require some modifications.

“I make a lot of anticlastic bracelets,” she explains. “If I’m trying to set diamonds in the center of a curve, the sharp edges of the rectangular tool could gouge the curved metal around the diamond. I sanded the corners so they’re not sharp angles that can dig into the metal around the stones I’m setting. I also sanded the bottom of the tool so it’s nice and smooth.”

In addition to making it easier to set 1 pointers, the tool comes in handy when she encounters a stone that doesn’t want to sit upright. “I can use the side where its wider to wiggle a big stone, so it will sit perfectly, or I’ll sit the narrow side on a small stone and use a hammer to tap the stone into place.”

Despite not knowing the true purpose of the original tool, she’s quite happy with her roadside purchase. “For $8, it was a bargain,” she says. “There is a hallmark in the steel and I’m sure it was designed for something other than what I’m using it for, maybe for winding a weird, old clock. And I can modify it further because it’s basically just a piece of steel in a handle. It’s a great little tool that I never would have made for myself.”