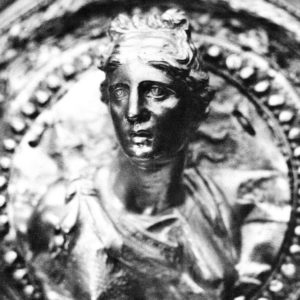 In northern Greece, sometime after the death of Alexander the Great, a master goldsmith fashioned this unusual medallion with its bust of Artemis, goddess of the hunt.

The medallion projects Artemis in high relief encircled by a rich frame of filigree, granulation, enamel and garnets that is again circumscribed by a network of loop-in-loop chains extending to a full diameter of 21 centimeters. The bust of Artemis was worked separately in the soft gold of the time, possibly formed initially over a bronze model, then attached to the medallion within a sawtooth edging. The three thin strips of gold which now secure the bust were a later addition. The head is in full relief. The face and hair of the goddess are beautiful examples of chasing and repoussé used with great expressive power. 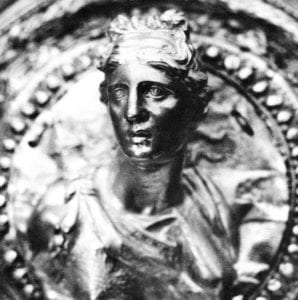 Perhaps deriving from a Praxitelian tradition, the oval face with its fixed gaze and slightly parted lips suggests an interior tension. The quiver and the animal skin thrown over her tunic point to the identification of the goddess as Artemis. The hair is artfully modeled into a high bow knot with loose tendrils falling onto her cheeks and flying behind the nape of her neck. In style the bust is similar to other depictions of Artemis datable to the third century BC and is in keeping with the cult of Dionysus prevalent in northern Greece at that period.

The encircling frame is divided into three concentric bands. Nearest the goddess is a 9mm-wide zone decorated with repoussé egg shapes soldered to the base and divided by filigree darts and granulated rosettes consisting of seven beads each. The middle zone is 12mm wide and decorated with a curving line formed of three wires that separate a garden of floral motifs, some of which are detached. Granulated and filigree rosettes, palmettes and ivy leaves are interwoven with round cabochon-set garnets. Most of the leaves and some of the palmettes are filled with green enamel. Encompassing this play of embellishment is a wreath of leaves, each of which is edged with beaded wire. The wreath in turn is crossed by ligatures with traces of green enamel and surrounded by beaded wire whorls. 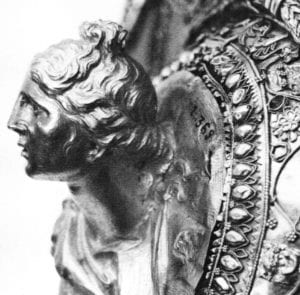 The network of loop-in-loop chain interspersed with garnets and small roundels with heads on them is the mysterious element in the medallion and leaves open to interpretation the purpose of this magnificent piece of gold work. Scholars have suggested that the chain network was perhaps intended as a hairnet to be affixed to a high chignon, for the rings at the outer edge seem to ask for something, like a cord, to pass through them. Although to date there is no corroborating historical evidence for this hairnet hypothesis, many feel it likely that the medallion was an object of personal adornment.

Another possibility is that the medallion formed the lid for a pyxis, a type of cylindrical box, which possibly held ashes after cremation. Among the few known examples of this kind of medallion, four of which are in Athens, is one in the Princeton University Museum, but it does not have the network of chains attached. The Artemis medallion was part of a gold horde discovered in Thessaly in 1929. It became one of the focal pieces in the important jewelry collection of Hélène Stathatos which was given to the National Archaeological Museum in 1957. 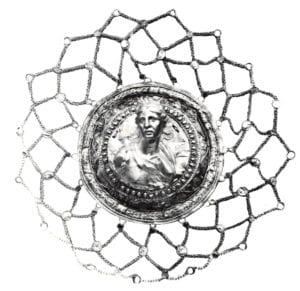 The fullness of conception of the figure, the fine rendering of detail and the rich ornamentation of filigree and granulation distinguish the Artemis medallion as a masterpiece of Hellenistic goldsmithing. Probably fabricated by an extremely skilled artisan in northern Greece, a well-known center of metal crafting, it embodies the painstaking techniques of fine wire and granulation work artfully combined with the inherited sculptural tradition. The fascination of the Artemis medallion is only increased by the enigma of its purpose.

Anne Barros – with information supplied through the kindness of Olga Tzahou-Alexandri, Director of the National Archaelogical Museum, Athens, Greece