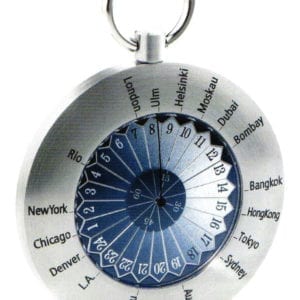 …it’s daybreak in Honolulu. Wolf-Peter Schwarz known to most jewelry-cognoscenti as the inventor of Charlotte variable jewelry, has come up with a light watch that indicates the time in the world in a sophisticated and sensual fashion. 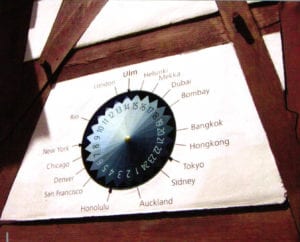 Wolf-Peter Schwarz is an Ulm-based goldsmith and designer who calls his illuminated scale for global timekeeping a “light watch”. Nomen est omen, meaning it not only indicates the precise time in cities all over the world, but also how bright or dark they are now. Wolf-Peter Schwarz even had the prototype of it installed as a large-size watch on the back wall of the house where he lives and works in Southern Germany. Bright and dark zones on the rotating 24-hour face mark the morning, afternoon evening and night. For instance, if the brighter early-morning zone is inching towards Rio de Janeiro, then the inhabitants of Bombay have already seen the last of the sun’s midday brilliance. One of the best things about the light watch is the fact that world travelers never have to change watches. The bright and dark zones on its face show what time it is and the sun’s relative position (rising or setting) on whatever continent they happen to be on. You’re always on top of all of the earth’s time zones without having to go through bothersome changing or even try to figure out what watch face on what wristwatch you have to consult. 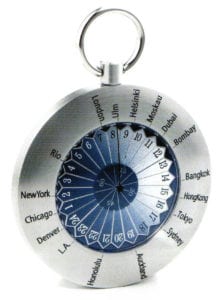 “Every day starts with the sun’s light in the east. Then it moves around our planet towards the west just as it moves around the watch in 24 steps from right to left”. That is how Wolf-Peter Schwarz explains the simple fact that his light watch face rotates “counter clockwise”, towards the left or opposite to the normal direction for watches. The names of the cities on the edge of the watch face always stay at the same place. Incidentally, the customer can have their watch custom-made with the names of the cities placed wherever the owner has friends or family. The Ehinger-Schwarz light watch is available in stainless steel as a wristwatch or pocket watch. If you need more information on the approximate position of the sun in Bombay or Manhattan, you can also find the precise minutes in a disc in the middle using the black line recessed into the sapphire glass. 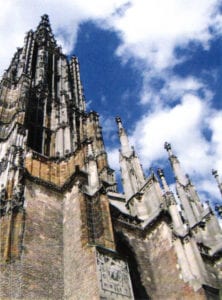 North side of the Cathedral in Ulm

You can best witness the sophistication of this watch by installing it as a large-size clock like Wolf-Peter Schwarz did on the back wall of his own house. Since he explained how his watch functions to one of the local tourist guides, the tourist company has made his back wall a regular stop on every tour. But Wolf-Peter Schwarz would like to have a version of his light watch mounted on one of the foremost hubs of international communication, namely a train station or an airport. Although he could also imagine his light watch in a hotel lobby where cosmopolitan travelers would always be in tune with what time their business partners or friends are on. But, the best place for his watch would be the north side of the Cathedral in Ulm because it is 162 meters high, the highest church steeple in the world – and just a stone’s throw from the Ehinger-Schwarz Creative Workshops. www.lichtuhr.com 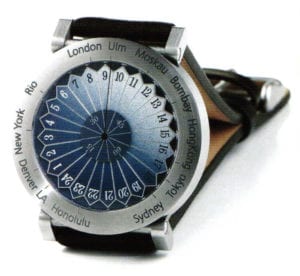 All articles by this author
Previous Germans and Japanese: Barring Punctuality
Next A New Face for Time
Social media