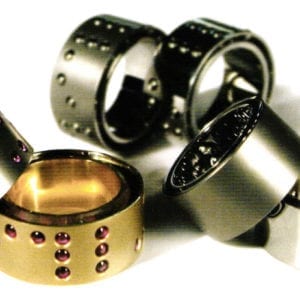 Marriage Rites: The Ring as a Symbol of Eternal Faithfulness

In many cultures, exchanging rings as a symbol of eternal togetherness is an integral element of the wedding rituals. Other marriage rites are more distinct from each other, depending on the religion, sense of tradition or regional origins of the marriage couple. 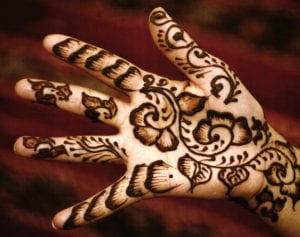 In Sardinia, the marriage couple symbolically eats a bowl of soup, whereas in India, on the night before the wedding, the palms of the bride’s hands are artistically decorated with henna ornaments, she is really scrubbed down in Bulgaria before setting off in her new life as a bride. Conversely, the marriage couple has rice thrown at it in many countries: rice is seen as a symbol of fruitfulness and is intended to guarantee a rich blessing with children. It is quite common in Germany that freshly married couples both saw through a tree trunk shortly after exchanging rings or that the husband carries his wife over the threshold of their house. But in almost all cultures on this planet, rings play an important role as symbols of togetherness. 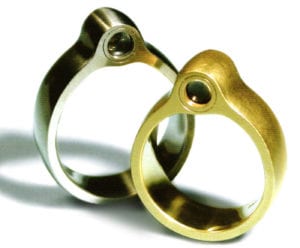 A glance through the lens reveals: images, words, photographs, drawings, and plans – held on microfiche – ideally hidden in the partnership rings “Thingsin” by Andi Gut 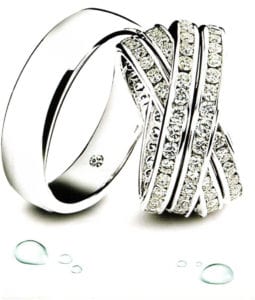 The more the better: platinum wedding rings with diamonds are particularly popular in the United States

The form of the ring is the reason for its symbolic nature as wedding jewelry recognized around the world: the circle represents eternity – therefore eternal love, speaking a globally uniform language now as it has done for millennia. One element of the wedding ceremony among Sumerians (4000 BC) could be interpreted as a precursor to modern wedding rings: the priests took one thread from the marriage couples’ clothing and tied them together in order to symbolize the eternal togetherness. It is indeed possible that, over the passage of time, this practice developed into a woven ring made of threads, worn as a symbol of marriage. The Celts (900 BC) were also familiar with rings made of woven grass, initially worn only as a symbol of tribal affiliation, but later on exchanged during the wedding ceremony. There is historical evidence that there has been a rite of exchanging rings since the 2nd century BC. The engaged man gave his bride a ring as a symbol of his love and the promise of marriage. Since the rapid rise in church weddings from the 13th century onwards, rings have been a standard element of the wedding rites in Europe. No, not only women wear rings, the men do also, as it became standard practice for the couple to put on their partners’ ring. It was intended as a manifestly public declaration of marriage and faithfulness, leading to a “shackling together” and – just as the church intended – should above all place a firmer focus on the man’s commitment to forsaking all other women. 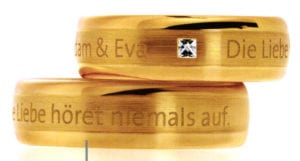 Messages in precious metal: wedding rights and written messages by Joop made of rosé gold and diamonds in princess cut

The Ancient Greeks and Egyptians always wore their rings on their left ring finger, as they believed that an artery, the so-called “Vena Amoris”, led directly from this finger to the heart and therefore to the love living there. In southern European countries, for example Italy, Greece and Switzerland and also in the United States, wedding rings are still most commonly worn on the left. The reason is the same as it was hundreds of years ago: The left side is closer to the heart and is therefore more akin to love. The ring is generally worn on the right hand in Germany, Austria and the northern European states. The right hand sight is seen as more preferable, as it is equated with terms such as correct, being right and such like. 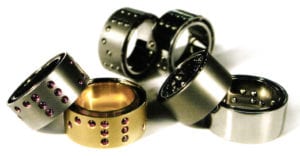 Haptic: partner rings by Eva Kathatrina Bruggmann in stainless steel, 18 karat yellow gold or silver, with steel balls or diamonds. The rings come with the Braille script I LOVE YOU

Ring forms and their symbolism

Typical wedding ring forms are just as old as the custom of exchanging the rings themselves. In the Roman Empire, there are reports that freshly wedded husbands would give their brides a ring in the stylized form of a key, thus placing in their hands the symbolic dominion over their house and estate. Twin rings were familiar in the 15th and 16th century; each of the designated wedding couple would wear one during engagement until the day they married. They were then joined together once more on the wedding day and the bride wore them together as a wedding ring. 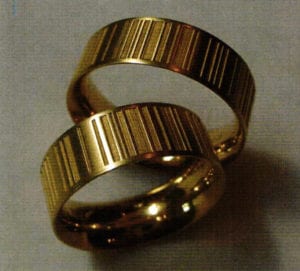 Then as now, wedding rings were often decorated with gemstones with symbolic power. Diamonds are still the most popular; due to its extreme properties and its literal “fire”, it stands for reliability, passion and eternal faithfulness. Rings in the form of two grasped hands or tied knots are also symbols of affiliation between the partners. Engraving of names, the wedding date or individual words of love is not only becoming increasingly popular, but also increasingly perfect: From laser engraving of a signature in the couple’s own hand writing to entire poems or stories in miniature format on the inside of the wedding ring, modern technology enables a large number of design forms.

Perfect camouflage or an enhanced desire for jewelry? The bride inserts an additional jewelry element (middle) over the basic ring (left), which the husband wears as a simple wedding ring. There we have the identical/different marriage couple (right). Collection “Lifelong” by Drachenfels Design

Additionally, an increasing number of couples create their own designs for wedding rings. In this context, gold, silver and platinum smiths around the world offer fantastic and very individual solutions for partnership rings. Two wedding rings, forged from one piece of precious metal and left hanging together, are broken apart during the wedding ceremony and inserted on the couples’ fingers represent one example of this. Another one: One section of the couples’ favorite poem is engraved in one ring and the other part in the other ring, so that the whole poem is not revealed until the rings are placed next to each other. 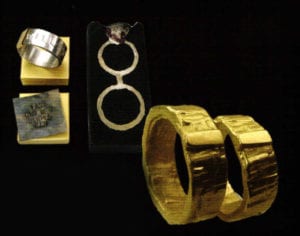 The engagement rings melt into their storage box made of gold and a message in copper to form liquid yellow gold, cast in a mold made of charcoal. The casting channel between the rings is separated, the binding bridge remains, however. Rings “Let us melt together” by Claudia Stebler

Messages in precious metal: wedding rings and written messages made of platinum by Wörner 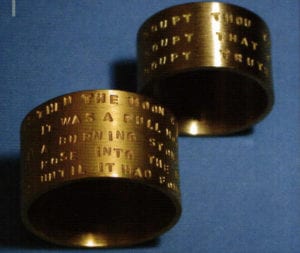 Readable together: text wedding rings made of sterling silver or 18 karat gold by Simone Gugger

Miniature text, a signature or even a fingerprint in a wedding ring: perfect laster engravings by the firm Meister 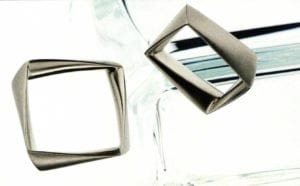 “Quadro” is the name given to the wedding rings by Angela Hübel. Angular and matt on the outside, polished and comfortable on the inside, they hold a great deal of exciting design 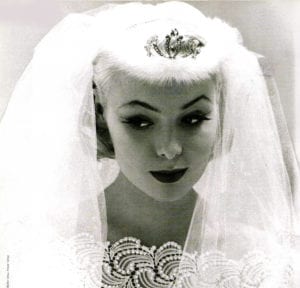 Multicolor wedding rings are very trendy at the moment, just like the additional decoration of the women’s ring with one or more diamonds. 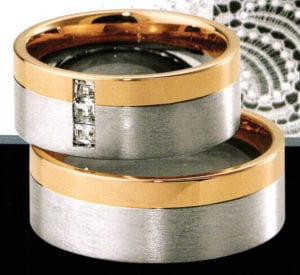 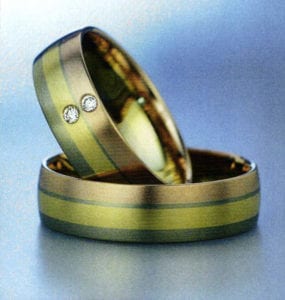 The “Morning Gift” by Niessing is a ball of pure gold that the husband give to his bride before the wedding. It produces two rings that weight precisely the same and together just as much as the ball 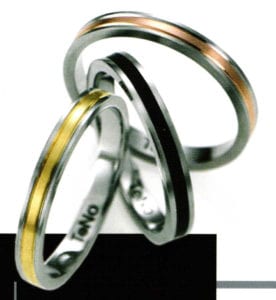 Exciting material mix in the wedding rings by TeNo: stainless steel in combination with gold or ceramics 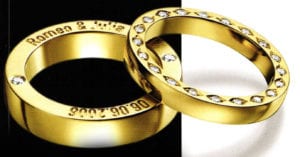 Golden rings with engraved name and date by Grestner. Whereas the sides of the women’s model are decorated with numerous individual brilliants, the men’s ring manages with just one stone 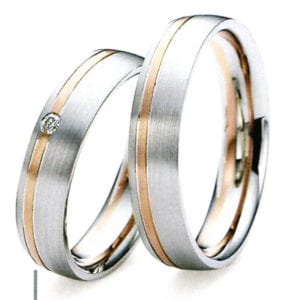 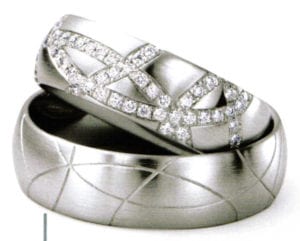 Lively forms for a lively marriage; although it is only recognizable as a structure in the men’s ring, the women’s model reveals the full extravagance of a line of brilliants. Model “Swing” by Fischer 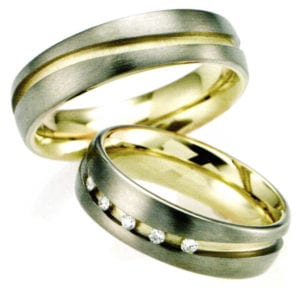 A lot of design in one pair of rings: bicolor wedding rings with flowing patterns and set brilliants by Sickinger

All articles by this author
Previous Ganoksin: Knowledge is There to be Shared
Next Ancient High Cultures: Jewelry, Talisman and Status Symbol
Social media