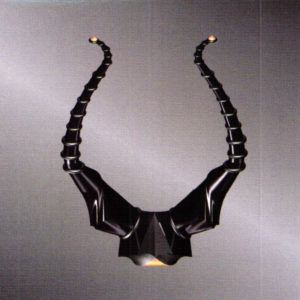 One of the debatable inclusions in the recent Metalsmith Exhibition in Print was a pair of computer renderings by Margaret Yaukey. Of all the images in the Exhibition in Print, hers were the only ones that were not of objects; instead, they appeared to be color print-outs from her computer. As such, they were really not much more than well-crafted color renderings. The jurors wondered if Yaukey’s images might be perceived as illegitimate.

I didn’t find the images very controversial. What I did find interesting was her statement. Making a number of glowing claims Yaukey gives good PR for computer technologies. She says that computer-aided technologies: “…aid us in realizing ideas that we could not have realized otherwise and encourage us to conceive and create with a new freedom,” which will soon generate a new “Golden Age in the Craft Community.” Wow! A wonderful new era in which we will all be working with computer-aided design and fabrication!? That’s quite a prediction.

This kind of rhetoric can be traced directly to Yaukey’s teacher, Stanley Lechtzin. Lechtzin has been an advocate of computer-aided technologies for almost a decade now. His position was clearly stated in an interview with Michael Dunas that appeared in the Summer 1988 Metalsmith, where he made even more sweeping projections than Yaukey. Also in that interview, he went into considerably more detail, and one should take care to consider the assumptions that led to the conclusion he made. 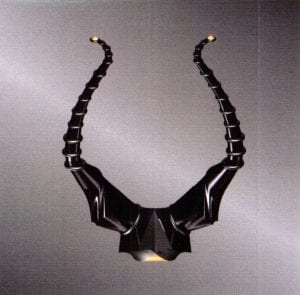 For Lechtzin, computer-aided technologies will bring the artist closer to the realm of pure idea by eliminating handwork. Lechtzin states unequivocally that “the mark of the hand” is not crucial to the definition of metalsmithing, but that “the exercise of intellect, [ and ] the manifestation of form” are. In Lechtzin’s view, physical labor is “somewhat onerous, something to be avoided by intelligent people.” (The italics are mine.) Ultimately, he doesn’t think that “direct contact with materials will have anything to do with the production of art.” In Lectzin’s vision, physical work will be completely eliminated by computer-aided technologies, and our bodies will be reduced to becoming input devices for computer terminals.

I shouldn’t have to point out that this view is founded on a profound contempt for handwork. In Lechtzin’s vision, physical labor and handwork are troublesome burdens, to be made obsolete by whiz-bang technologies. Accordingly, intelligent people should share his disgust.

According to Lechtzin, art is about the exercise of intelligence and the dispensable aspect of craft is about the exercise of the body. Lechtzin’s metaphysics elevate the mind to a position of superiority over the body, a version of the classical Western schism between mind and body. However, recent research into the nature of the mind suggests that Lechtzin is wrong.

In fact, the exercise of the body is a component of intelligence. Howard Gardner’s 1985 book Frames of Mind describes a theory of multiple intelligences and he is able to discern six localities within the brain, each with specific tasks. There are linguistic intelligence and mathematical intelligence. This body-oriented aspect of mind controls all types of muscular coordination: both the large motor skills concomitant with the crafts. While Lechtzin elevates linguistic and mathematical intelligence to a position of honor and demotes bodily-kinesthetic intelligence to something shameful and low, the physical facts of the brain suggest that such a hierarchy is wholly fictional.

Furthermore, I believe most people get involved with crafts precisely because it is centered on physical labor and the skilled use of the body. Craft continues to be a viable pursuit because it emphasizes handwork. Over and over, I have watched students enter a craft studio with no experience in using their hands, and suddenly discover that the labor was powerfully resonant. Generations raised on television (and now on computers) discover the pleasures and potentials of living in their whole bodies, and exercising a part of their intelligences that had previously been dormant. As seductive as the computer might be, it cannot engage our whole mind, and it certainly doesn’t encourage us to live in our whole body. Craft acts as an antidote to the increasing dematerialization we encounter in modern life. People recognize this intuitively and they value craft for this reason. 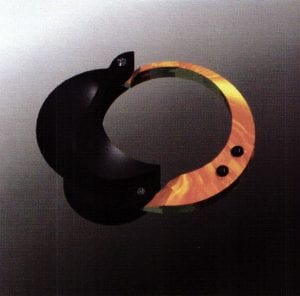 Lechtzin’s – and Yaukey’s – vision of the computerized future of the craft rests on a flawed hierarchy that places mind over body. Most craftspeople, intuitively recognizing that handwork is a manifestation of bodily-kinesthetic intelligence, find physical labor enjoyable. Some even find handwork crucial to the quality of their lives. They do not share Lechtzin’s disgust, and they are not stupid. As a result, they will not be nearly so eager to replace their bodies with computer-aided technologies.

And then, there are other problems with Lechtzin’s vision. What of the law of unintended consequences, of side effects never foreseen? What of the high capital costs for computers, software, and especially for computer-controlled machines? What of the predicted, but as yet unproven, economies for production jewelers?

I make a counter-prediction. Handwork will not die out. It will continue to attract people who find the disembodied nature of modern culture onerous, people who want to build a more holistic and balanced life. Craft will continue to synthesize body and mind, and its main outlet will be through the hand. Not the computer.

This is not to say that computers and their associated technologies are useless – they do many things that would otherwise be difficult or impossible. But the hand is an amazing instrument, too. Computerized simulations of the human hand are bulky, fabulously expensive, and require prodigious amounts of computing horsepower to run. (Even an ant makes the most powerful computer in the world look stupid.) In the end, Lechtzin’s predictions about the abandonment of hand processes in art are nothing more than speculative science-fiction. The hand is here to stay.

Bruce Metcalf writes and makes jewelry in Philadelphia. He does his writing on a Power Macintosh 7200/75.