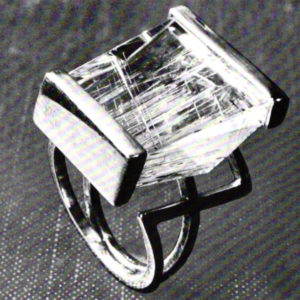 This article was written by Margaret De Patta in 1948 and never published. It is printed here with the kind permission of Eugene Bielawski.

What happens to an artist when the demand for his work exceeds his ability to supply it? If he is realistic he reaps the benefit of raising the price to the point where a temporary equilibrium is established between supply and demand. What then happens to this artist’s work? It necessarily becomes the possession of the very few who are in a position to pay these luxury prices. This is the situation I found myself in – a multitude of fine friends and appreciators of my work who were unable to own and enjoy it.

For quite some time I had become aware of contradictions between my social viewpoints and my method of work. Contact with the Bauhaus in Chicago clarified and strengthened the tendencies toward social integration. However I was justifiably apprehensive of the time demands of business that would interfere with my working and designing time – also the cost factors of even simple production plans appeared appalling. Believing firmly in the modern production potentialities to produce better articles in greater volume for the many and also believing in the ability of the average man or woman to appreciate honesty and integrity of design. I set out at last upon a new, and, for me, revolutionary path – l became an artist craftsman accepting the challenge of bridging the gap between the craftsman and production.

So here then was the aim – to produce more than one piece of each design and to sell these pieces at a lower cost. It would have been possible to proceed upon another path – to produce more pieces and by increasing the number of retail outlets to place these at the same figure as formerly. Being somewhat of an idealist and not a capitalist at heart. I determined to place my designs upon the market at a figure to compete with the comparable material quality of costume jewelry. The problems entailed in this production venture can be best understood only by other designers also engaged in this heartbreaking pioneer work.

In the entire field of jewelry production I found a perpetuation of traditional technics and in spite of the innovation of a few modern processes the designs were still of past eras. A good design reflects the technics and the viewpoints of its age, therefore no matter how beautiful an old design may be it is still a sad, mistaken thing when copied or imitated in our own day. That vital element necessary to good design – the interaction of the tool and material upon the designer and of the designer upon tools and material – had been completely lost. Here we are living in an age of high precision machine production and the effect of this upon jewelry design. production and stone cutting has been less than nothing. What are the factors that perpetuate this lack of contemporary expression in a field apparently so unlimited? The answers crashed down upon me when I set out hopefully to place my small group of production pieces. Here was a vicious strangle hold that could not be broken. 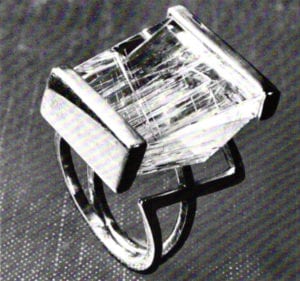 Goods are purchased on the basis of previous sales-automatically continuing the life of the old and excluding the presentation of the new. The purchaser’s taste is thus conditioned by the choice between one conventional design and another just as bad. Business is strangling itself in other ways. Promotion projects of advertising and packaging become all important. The public is conditioned to buy the prestige of a name and a glamorous, exquisite package – if anything of value is contained within, that is entirely incidental. It is a fortunate miracle that progress is made in spite of these barriers. The real hope in this field lies in two reciprocating factors – one the progressive forces that see the contradictory facts of our economic structure and seek to bring about change – and the small but ever-increasing group of designers with convictions and integrity who demand that their best efforts be presented to the people. Let us be grateful for these and the small shop that is willing to present to the public these “objects of the future.”

Opposition to my new work comes from other sources. This remark overheard and repeated by a friend – “Margaret De Patta? Oh! She has gone commercial” caused me to wonder. Is it a sin for an artist to earn his livelihood from his work? Is it more ethical to produce for the favored few than for the larger group? Have I betrayed and degraded my standards of design and workmanship established over so many years? The answers here are obvious, especially to those who have seen these later things.

I am proud of the fact that the popularly priced piece is indistinguishable from the “one-of-a-kind” piece. It delights me to no end to display a group of these things and see the baffled frustration on the faces of the “handcraft for handcraft’s sakers” as they realize their inability to distinguish one group from the other. The design and the model are produced by me. The materials used are the same sterling silver and semiprecious stones. The workmanship and finish are of the exact same quality, the remaining difference being in the number of pieces produced of a given design. This might be a legitimate objection if a tremendous number of pieces flooded a small area, thereby causing the design to become so familiar to all people that the stimulating interest in it is lost. This is a very controversial point and one on which I wish to take a definite stand.

The opposition maintains that an article well designed, having within itself essentials of contemporary expression and genuine quality does not lose these qualities by being endlessly produced. Is it not possible to become insensitive to a musical composition, no matter how fine, if it is heard every 15 minutes over the radio? Jewelry functions in the realm of esthetic perceptions of human beings, a consideration that cannot be overlooked. On the other hand, I cannot respect the individual who thinks he buys superiority and prestige in a unique creation unpurchasable by others – and again how different the attitude expressed by one friend who when he sees another person with a piece similar to his says immediately to himself. “Ah, another person who appreciates design-probably someone I would like to know.”

The choice of a piece of jewelry reveals much of the character and personality and the understandings of the individual. A piece of jewelry well designed should be the embodiment of the trends of our times – these new types of structures, clean line, elimination of decoration, new spatial concepts, new use of transparencies and a fresh appreciation and use of organic form – recognition of the true essence of these things is growing, consciously or unconsciously, in an ever-increasing minority.