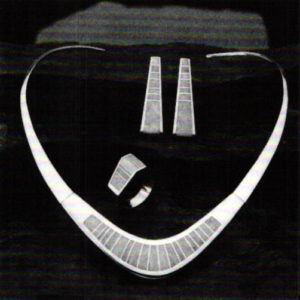 “American jewelry has come into its own,” says Concepts Gallery owner Doug Steakley. “lt has really matured. . . My thesis is that a whole new professional has emerged in this country.”

To help that new professional support himself or herself, Steakley. 42, has graduated from his silver workshop to the executive suite, as his business has grown to three galleries two in Carmel and one recently opened in the Stanford Shopping Center in Palo Alto, California. 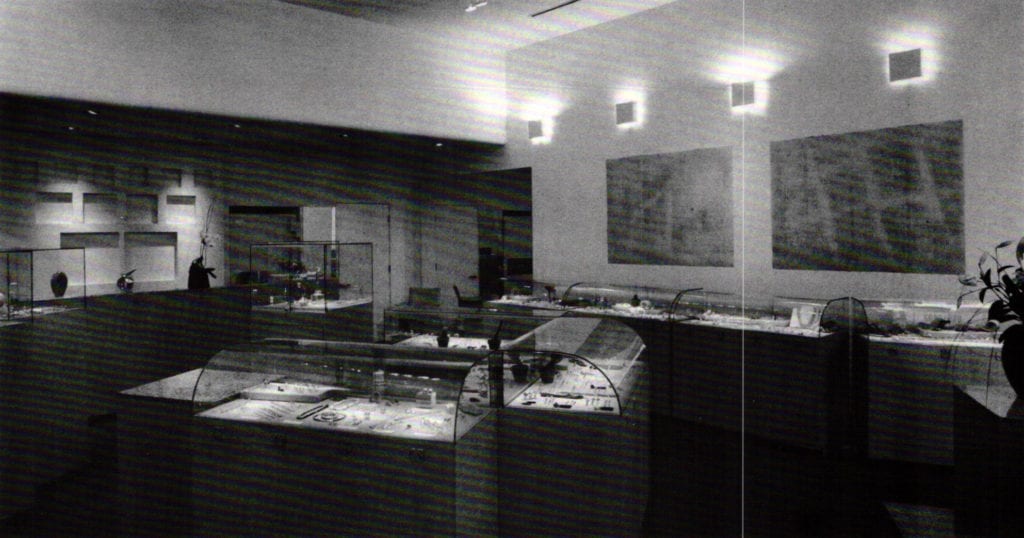 Steakley’s job now is to conceptualize—stretching the imagination of designers, promoting their work worldwide and educating consumers: “A gallery by definition is a place that causes and allows work to be shown that is not appropriate for other types of settings. It brings into being work that otherwise would not be made and displayed. Ninety percent of what we do is by young designers who have an art school background and who have decided to go into business for themselves.”

High, museumlike display cases hold the works of designers at Concepts. Small cards announce the creator simply so as not to detract from the pieces. Yet these cards edify the passerby who ventures into the gallery, attracted by works that exude the individuality of the artists. The gallery should be an educational resource for the public, providing an opportunity for interested persons to view jewelry that is not available anywhere else,” Steakley states.

In addition to year-round displays, Steakley regularly holds receptions, prints catalogs and hosts one-or-two-person shows. “My purpose is to give the individual designer a lot of attention. Our exhibitions are to encourage new work by young and relatively unknown designers and to reward more established designers who have made a significant and lasting contribution to the field of jewelry design.”

Less is more at Concepts. Open space sets off tire work of one designer from another. Customers have a chance to pause and reflect on each piece before going on to the next. Concepts gives the customer a view of the work in action, as salespeople wear the jewelry while at work. 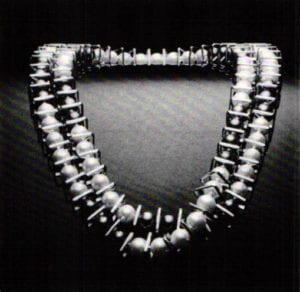 In his role as middleman, Steakley encourages designers to stretch themselves in their work—perhaps to use more precious metals and stones, to move up in price category or to add new dimensions. For instance, Steakley saw a lot of potential for higher-priced pieces in the work of Mark Hileman a Southern California jewelry designer and Architect. With Steakley’s encouragement and promotion, Hileman’s work has doubled in price. There is a lot of risk in this. There is a lot of labor and materials involved. But we were immediately successful.”

Through exhibits in museums exposure n trade journals and popular magazines, trade shows and in galleries like Concepts, individual artists are becoming recognized much in the same manner that Tiffany lamps were recognized when they were introduced in the 1880s. Citing such ‘hot designers” as Michael Good, Whitney Boin and Sean Gilson, Steakley states, “If this period does come down as important, I’d like to have Concepts be a small part of that.” 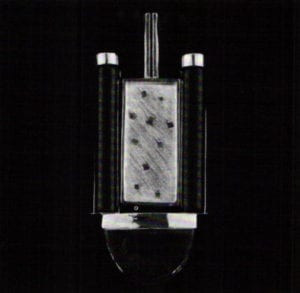 Steakley also mentioned the work of British designer Wendy Ramshaw as imminently collectible.” It’s really possible that she is going to be considered a hallmark 50 years from now. So I don’t have any compunction in saying her work is collectible.

In the coming year, Concepts will show the work of eight Italian designers and Arline Fisch, one of the best known contemporary American jewelers. Promotion, the production of catalogs, exchanging correspondence (enough to fill a file cabinet) and public relations are taking a great deal of Steakley’s time. But that role evolved for him when he traded in his sketchpad, hammer and metal for spreadsheets and financial forecasts.

Alex Hulanicki is a reporter for the Monterey Peninsula Herald.

All articles by this author
Previous Projects of Exploration: Performance and Beyond
Next A Metalsmith’s Guide to Tokyo, Japan
Social media