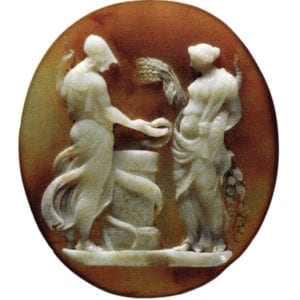 Jewelry Gemstone Engraving Over the Passage of Time

The art of gem cutting (glyptics in Greek) is one of the oldest testimonies to how installed, fascinating miniatures can transform gemstones into tiny works of art with immense charisma and magical significane. Decoration, symbols and magic formulae that still fascinate and have given gemstone engraving a special place in the cultural history of mankind. 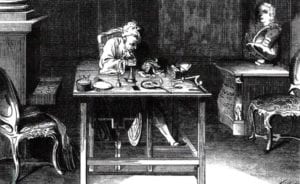 Gem workshop according to Diderot d’Alambert 1868 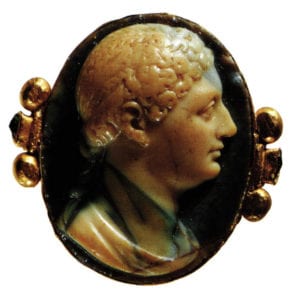 The roots of glyptics are found in the 7th millennium BC. The Babylonians initially used soft stones such as serpentine, steatite, lapis lazuli or turquoise, as naxium, a corundum material from the Island of Naxos can be used to make markings in it. Bearing signs and symbols, the stones soon became popular amulets. Babylonians soon developed the cylindrical form, which soon produced the rolling stamp, which was used to document events of considerable significance. According to a report by Herodot, every Babylonian wore a signet ring or a rolling stamp around their necks. Indeed, many of them have been preserved. The Anthropological Museum in Berlin contains mummies with signet rings still on their fingers. These rings with their symbols cut deep into the stones have been used as stamps for documents and to mark possessions right up into modern times. Their impression made documents legally binding and upheld ownership. 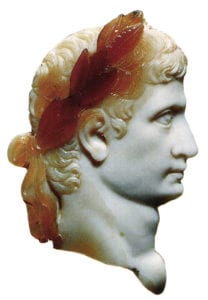 Signet cutter drilling a cylinder seal. Egyptian relief from the grave of Ti in Sakkara

The use of gun drills and wheel technology soon enabled the processing of harder gemstones such as ruby, sapphire or quartz and enabled the production of more demanding images. Two thousand years BC was a golden age in this respect. The rather stylized portrayals of heroes fighting animals, frightful gods and sacrificing people up until then became more realistic. When gemstone engraving was then absorbed into Minoic-Mycenaean and later on in the Hellenic culture, new wind was breathed into this old oriental tradition. The artistically designed plants and animals exude joie de vivre and naturalness. The absolutely refined, miniature figures reflect the Greek ideal image of mankind. Aphrodite and Eros or the Goddess of Victory Nike are found as favorite motifs of the engravers of this age along with the graceful depiction of the female form. 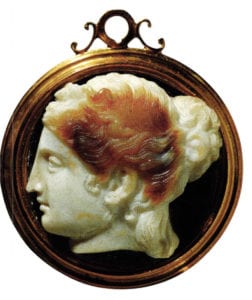 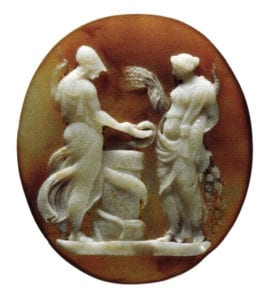 Giovanni Pichler, cameo, sardonyx, “Salus and Abundantia at the Altar”, around 1780. The Leo Merz Foundation, Bern, previously Collection of the Vatican

The royal workshops at the court of the Ptolemaic Kings in Egypt developed a new stone cutting technology in the 3rd century BC. Magnificent cameos, designed for the first time as relief, were created in Sardonix in India. Since then, experts have made a distinction between cameos (raised) and intaglios (sunk), whereas there is not always a correct distinction made between cameos and gems.

In order to strengthen their power at home, Roman Emperors commissioned Greek stone cutters with the production of valuable cameos in their image. Dioskurides, the Greek royal cutter at the court of Emperor Augustus, processed the Arabian sardonix, the stone of preference, used to make classic examples of antique stone cutting, with great artistic skill. The next stage involved cameos in several layers such as the Gemma Claudia, the Lion Cameo (now found in the Museum of Art History in Vienna), whereby the multiple colors were used to create charming nuances of shade. 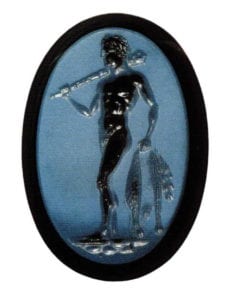 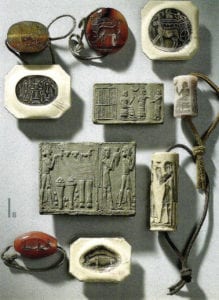 The depictions on gems and cameos were cut into the stone using extremely fine drills and a crystal magnifying glass. The first “forgeries”, gemstones made of glass paste, also emerged in Ancient Greece and Rome. They were used in particular for precious golden jewelry or rings and pendants, perhaps because their usually blue/white or blue/black colors offered a strong contrast to the gold. Magic gemstones played a very large role; they were produced in the 2nd and 3rd centuries AD as intaglio. They were small, powerful gemstones and jewelry stones with engraved pictures and inscriptions, which people wore as medallions, ring stones or sewn into bags. This form of amulet has fascinated people from ancient times into the middle ages, the Renaissance and even until today. Indeed, the world of science is increasingly interested in them. 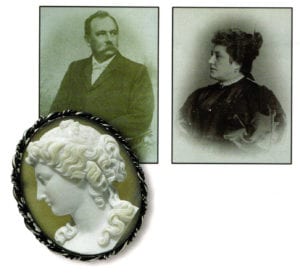 Ida and August Purper, builder of the villa from the late 19th century, which now houses the German Gemstone Museum Idar-Oberdstein. Gems from the “Idarer Caméen Era”, favorite jewelry of I. Purper, 1847-1937 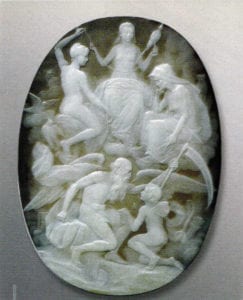 “Life is but a short dream”, a masterpiece by the French stone engraver George Le Maire, Bailey, 1853-1914

In the middle ages, antique gemstones were used for precious book covers, shrines, crucifixes and church objects, diadems and crowns. Apart from some work in the Carolingian and Staufer Ages, some gems were manufactured in mountain crystal from Burgundy. The golden age of gemstone rediscovery took place in the Italian renaissance above all. It took Ancient Greece as its role model. Indeed, it intended to be more than simply a copy, and in fact preservation and development of their spirit. The major centers were Florence, Rome and Venice, which was the starting point for diamond engraving, from where it spread to the Netherlands. 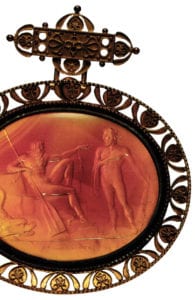 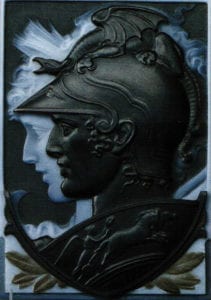 Small cameo portraits according to ancient sources were popular in the 18th and 19h centuries. They were expensively made and used as inlays, for example on the lids of small boxes or as paperweights. Cameos made of mussels and lava were fashionable in Italy during the 18th century. Von Heck, one of the most avid gemstone artists in the middle of the 18th century, made an intaglio of Goethe, who himself became one of the most passionate collectors of engravings, oats of arms and monograms. This field of art experienced a golden age in the 19th century. 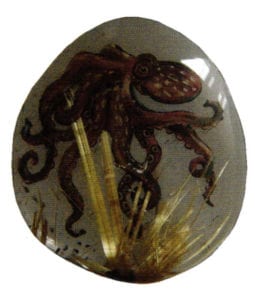 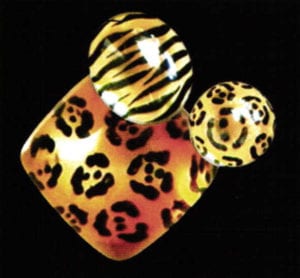 Hans Ulrich Pauly has offered almost all his apprentices a job once they had completed their training, and he is particularly proud of the awards that two of his former students won as National Champions in 1998 and 2000. “I see my work as a form of connection between centuries of old, masterful tradition and the challenge to tease innovative impulses from the old art and to create a modern language of forms”, says Hans Ulrich Pauly, who is convinced that the profession of gemstone engraver has a future, as long as one knows how to use the old techniques in a modern manner. “Engravers will only be in demand if they have unusual ideas and understand how to combine old quality with modern design and marketing”. Pauly himself has already organized several design competitions for modern engraving, thus mirroring the considerable innovative potential in the small industry. His own imagination also seems boundless; he is constantly trying out new methods and forms, and draws inspiration from the unique character of each individual gemstone. International jewelry companies such as Boucheron or Victor Mayer appreciate the modern interpretation of the old craft, which the Idar Oberstein-based artist commands perfectly. 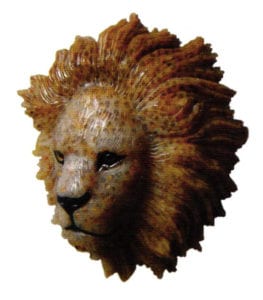 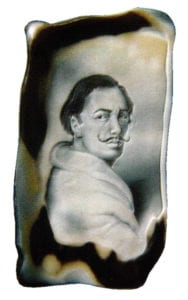 The profession and requirements for gemstone engravers:

According to the Trade Guild of Gemstone Engravers, there are approx. 25 crafts firms in Germany that process gemstones.

An estimated 80 – 100 German gemstone engravers work in their professions (some until a very old age). 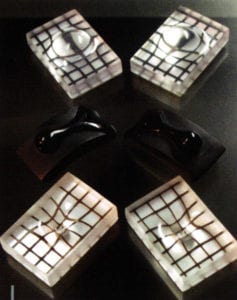 “Op-Art” in mountain crystal and onyx, developed by Carlo Wild – one of the National Champions winner 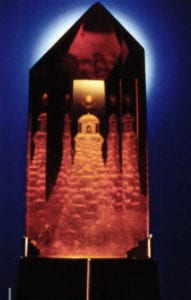