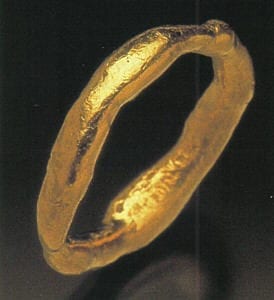 Home » Learning Center » Jewelry Design » Behind the Design » Is There a Jewelry Avant-garde?

Is There a Jewelry Avant-garde?

Curator Glenn Adamson has been thinking about the idea of a craft avant-garde for some time, specifically in relation to furniture. In his article ‘The Next Moment in Studio Furniture,” Adamson suggested that perhaps the field has gotten a bit too stodgy and tradition-bound, and that it needs to generate new ideas. He called for “the presence of a true avant-garde” in furniture. [1] Which got me to thinking… is there a jewelry avant-garde?

I have to admit that I’m more cautious than Adamson. There was a time when I would have embraced the notion of a craft avant-garde enthusiastically: Hell, sweep away the old and bring in the new! But now I’m somehow reluctant. The whole idea of an “avant-garde” is loaded with baggage. In fact, I don’t even know if such a thing is possible anymore.

The avant-garde, also called the vanguard, originally signified a light, fast-moving military force that led the heavy infantry and artillery regiments. The avant-garde scouted territory, estimated the size and composition of enemy troops, and absorbed the shock of initial contact. Where the avant-garde went, the main force of the army followed, and full-scale battle ensued. The term was adopted by the art world to denote the most experimental artists, those who suffer the most resistance from the public, and whom more conventional artists must someday follow. The violent metaphor is intentional: it supposes that the world can be accurately divided into friends and enemies of the new, and that art is militant in the ongoing cultural war.

The term “avant-garde” is freighted with baggage from its source in military language. Consider the implications of applying the idea of an armed vanguard to the arts: The term assumes a condition in which a smaller group leads the way for a larger one, which in turn presupposes an overall unity to a field, whether it’s painting, dance, literature, or crafts. It assumes that a field moves forward all at once, all in the same direction, just like an army. It implies resistance and struggle, and eventual defeat to a countervailing idea. And it suggests a “rear-guard,” a reactionary group that desperately hangs on to an obsolete idea. A complex narrative of winners and losers, and organized victory over an outmoded idea is compressed into a single phrase.

I suspect that the term “avant-garde” was applied to visual art at the end of the nineteenth century, asserting the inevitable progress of modern art, and the backwardness of all those who stood in its way. In many ways the early Modernists tried to change the world with a revolutionary zeal not unlike that of Marx and Lenin. (Not surprisingly, Modernism in Europe was closely liked to Socialism.) The link forged between the avant-garde and revolution has never been broken, with certain consequences. Both are forever associated with the idea that the past is hopelessly corrupt, and must be relegated to the dustbin of history. It follows that the idea of the avant-garde places a profound emphasis on the present moment, and contains an undertone of revulsion for anything traditional. This attitude of combined enthusiasm and disgust is a hallmark of the modern avant-gardist.

My point is this: approving references to an avant-garde are never neutral. Not only is there advocacy for something presumed to be new and better, but a whole series of hidden assumptions exist. The field in question is presumed to be unified, the new idea is presumed to become dominant after a period of struggle, and some old ideas are presumed to be better off dead and buried. That’s why I’m cautious about any declaration that a new avant-garde has arrived. I have to ask: is this model of rupture and displacement a good fit for craft?

It’s useful to recall that modern craft had an avant-garde moment between 1940 and 1955, when Modernist ideals and styles were incorporated into all the craft mediums. At that time, new ideas being introduced into craft were radical, changing all aspects of craft permanently, and forcing the abandonment of the outmoded arts and crafts style. [2] Could the same kind of transformation happen to craft in the twentieth-first century? Anything’s possible, but the present condition of the craft disciplines, including jewelry, argue against it. Fragmentation is the order of the day; the unity that a successful avant-garde presupposes has disappeared. (The same is true of all the visual arts.) Each craft field can no longer be compared to an army, marching to one cadence toward the field of battle. Where there was once a common purpose, there is now multiplicity.

Ganoksin is sponsored by
[2] Could the same kind of transformation happen to craft in the twentieth-first century? Anything’s possible, but the present condition of the craft disciplines, including jewelry, argue against it. Fragmentation is the order of the day; the unity that a successful avant-garde presupposes has disappeared. (The same is true of all the visual arts.) Each craft field can no longer be compared to an army, marching to one cadence toward the field of battle. Where there was once a common purpose, there is now multiplicity.

Even in studio jewelry, which is a comparatively small field, a number of discrete factions have developed and matured. The broadest division is between production jewelers, who must make a living from their work, and academic jewelers, who are expected to experiment without considering the marketplace. The frictions between these two camps are well known. In fact, the wide variety of attitudes and aesthetics present in jewelry today is probably an indicator of the field’s good health.

What we have here is pluralism. This is the postmodern condition, in which ideas jostle and compete, but no single discourse dominates. Most craftspeople are comfortable with this condition, for it leaves space for both variation and sameness. Everybody is invited to explore a vast array of options. Choices, when made, are usually made freely. One can follow, or one can explore, and the surrounding community of jewelers does not explode into angry denunciations. For the most part, it’s a genial and accepting culture.

Is this a fertile field for the militancy of an avant-garde?

I think not. Conditions are not ripe for revolution. However, jewelry is fully capable of evolution. The last jewelry movement to be declared a revolutionary avant-garde was the “New Jewelry” that emerged from England , Holland , and Germany in the early 1980s. Anybody who lived through that period remembers the wild claims that were made in its name. One would have thought the Revolution itself was approaching. But instead of transforming its field, as Modernism had irrevocably changed crafts, the New Jewelry expanded the menu of available options. The movement proved that personal ornament can serve as an effective vehicle for certain meanings, and that good jewelry does not always have to be worn. It was as if the New Jewelry offered a few new genes to the pool, rather than creating a new mutant species. It contributed to the change in the field; it was progressive.

Progressive change is perfectly suited for a pluralistic environment. Amid the multiplicity of the arts today, progress can occur simultaneously, in very different ways, in many different locations. This kind of change is evolutionary, not revolutionary. Progressive change does not necessarily posit a militant rupture from the past. Instead, it proposes more possibilities, more options.

Some people may think any progressive tendency constitutes an avant-garde, but I disagree. In my opinion, a true avant-garde is necessarily revolutionary and necessarily effective. And if effectiveness is necessary, then nobody can ever know whether or not a movement is truly avant-garde at its beginning. The influence a movement exerts can only be measured long after it first appears.

Perhaps Glenn Adamson would be content with calling his “next moment” progressive instead of avant-garde, but I must assume that he, as an experienced historian, is aware of the nuances of the word he chose. My impression is that Adamson hopes to see the attitudes of conceptual art — willingness to do research, openness to new subject matter, acknowledgement of theory — applied to the making of real furniture. For Adamson, avant-garde work is identified by the thoughtful and focused employment of the full range of concerns native to craft — even functionality and domesticity. He sees this new work as the breakthrough to the “next moment” in studio furniture, challenging the presuppositions of everything that has come before.

There are a number of jewelers whom I believe are already creating the “next moment” in jewelry, exactly as Adamson hopes. They are mostly under 40; they appear to be very familiar with conceptual art strategies. Their work doesn’t look like conceptual art, however, it’s usually recognizable as jewelry. Among them are Jana Brevick, Lola Brooks, Susan Myers, Mary Preston, Tina Rath, and Anika Smulovitz.

Are they jewelry’s avant-garde, or are they progressives? While I don’t know any of these women personally, they don’t seem like a crew of wild-eyed revolutionaries to me. While skeptical, they also seem invested in the craft and the community, which is not a good condition for revolution. There seems to be too much respect for the craft, too much engagement in history, too much interest in beauty, too much affection for American popular culture. These women are the face of jewelry’s future, and they are builders, not destroyers.