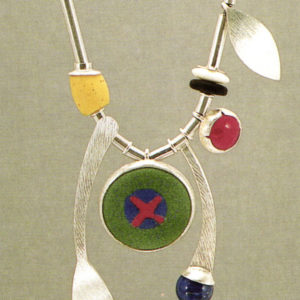 Upon entering his studio, anyone familiar with Heinz Brummel’s work will recognize the playful geometry of the vignette making up the far wall. Three tall windows covered in bright canvas shades of red, yellow, and blue form primary rectangles; hung from the ceiling just in front of the windows are two round, post-modern chairs in wire and vinyl; and parked just beneath is a classic, low-slung, black BMW motorcycle, its circular blue and white logo curiously similar to Brummel’s own designs. Brummel, bent over a work bench, intent and absorbed, lends the space an atmosphere redolent of a Viennese werkstätte, where one might find various craftspeople working on different projects, yet all reaching for the same grail of functional beauty. 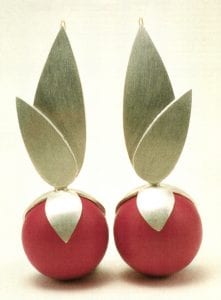 Brummel’s striking artistry in sterling and enamel is worn from London to Los Angeles. His pieces range from simple, single-element earrings to elaborately constructed multicomponent pieces. Many of Brummel’s standard objects – typically brooches and pendants of cloisonné and semiprecious stones, begin as simple frameworks. Structural forms he has designed are like mannequins yet to be clothed. From these basic starting points Brummel crafts unique pieces. He might add a cloisonné face or create appendages of bezelled lapis, affix dangling cones of onyx, or sand-blat a portion of plain enamel to create a textured design. Some pieces have planes of colored laminate, a small working whirly-gig, or a slinky-like stretch of tightly coiled sterling. A simple pendant, a skeletal fish caught on a leather line, is comprised solely of sterling and caprice. 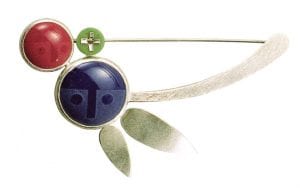 His missile like projectile brooches might feature any combination of bone, jade, enamel, or antique glass, poised and ready to blast off their settings of polished sterling. Brummel often integrates everyday objects into his designs; a pair of earrings resembling small cages house flea market marbles; a similar pendant holds an ordinary rubber stopper, no longer ordinary in its new environment.

Unique museum pieces adorned with semiprecious stones and found objects have won Brummel recognition and awards across the country, but all of his works, from the simple to the complex, share the same seamless craftspersonship. The precision in Brummel’s work is as outstanding an element as his trademark of primary-colored cloisonné. 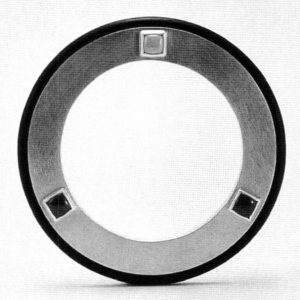 The pieces which have been most satisfying for Brummel are a series he calls Art and Science Handcuffs. These mechanical bracelets are marvels of engineering in hand-sized scale. Simple in comparison to his elaborate pendants, the cuffs are frugally adorned with small bits of bezelled enamel and bands of black latex. They are his proudest achievement and deceptive in their simplicity. The clasp system slides together to encircle the wrist with a solid, ingenious snap. Compared to his early works the sheer design of these cuffs attests that Brummel’s maturation, patience, and dogged quest for perfection paid off. 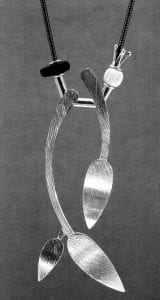 Brummel considers the attention to detail the core of his work – the molecular level which determines the overall make-up. The micro should reflect the macro. “Seeing how some is made is as important as seeing the object itself.” 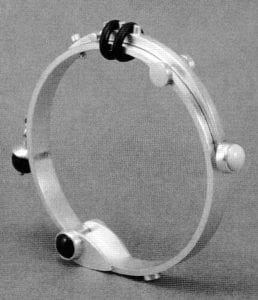 Over the course of a few months, I visited Brummel weekly and got to know him over numerous cups of coffee. Though my intent was to interrogate him about specific technical aspects of his art, our conversations invariably turned to aesthetics. 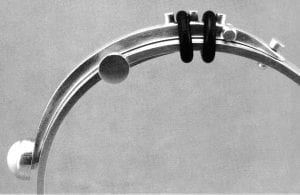 One of Heinz Brummel’s concerns us our culture’s visual illiteracy. Children are not encouraged to look at objects critically, nor are they taught to appreciate design or enjoy an object simply for its aesthetic value. Our society is so consumer oriented that objects are desirable simply because they are material. This tendency generates mindless consumption and allows marketers to impose choice limitations with little, if any, aesthetic consideration. Brummel laments the lack of encouragement for those outside the arts to discriminate or have aesthetic opinions regarding the thousands of items they live with, use, and see everyday. 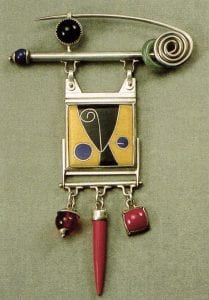 Brummel spent his early twenties living in Europe, primarily in an idyllic rural community in south central France, where the residents subsisted by making and selling simple hand work of leathergoods, jewelry, and clothing. The romance of such a lifestyle made a deep impression upon the artist. After returning to America, he began his only formal instruction – one semester of jewelry design at the University of Minnesota College of Home Economics. He spent years learning by doing, making jewelry in his free time between day jobs of demolition and restaurant work. Far from limiting, Brummel’s lack of structured education has left him unsullied. His work retains a lucidity and embodiment of character it might not have had had he spent four years at a design school. While he admires the knowledge and the techniques that can be acquired in such settings, he has a love/hate relationship with some academic taste makers who are cushioned and protected from the marketplace by ivied walls. Brummel describes himself as a “blue collar artist,” and when I remind him of his level of technical ability he responds modestly, “I’ve simply taken Jewelry 101 skills and honed them.” In the early years he plied his craft when he could, slowly acquiring tools along with experience through trial and error. What had been a passionate hobby became a livelihood only after 1986, when Brummel had his first real exposure during an American Craft Council show in St. Paul. After this success he felt he could pursue jewelry full-time. 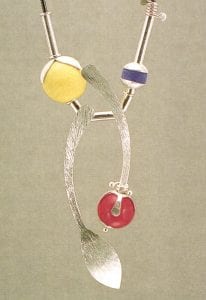 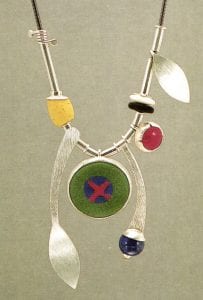 Brummel’s personal and professional lives are intertwined. “I have two environments, both allow me to blend work and domestic life.” He will take home a tray of earrings and put together an order while keeping an eye on his two young sons, Oliver and Oskar, (named after the German artist Oskar Schlemmer). Brummel lists Schlemmer along with others of the Bauhaus movement as influences in his life and art. He is inspired by artists and craftspeople of the late nineteenth and early twentieth centuries, not for their direct influence upon him, but rather, “for being kindred spirits pulling water from the same acrchetypal well.” Elements of Brummel’s work might be compared to those produced by the Wiener Werkstätte studios, which, over a span of forty years encompassing Nouveau, Bauhaus, and Arts and Crafts, produced thousands of object d’art featuring elements of nature molded into formal geometries, and functional objects. 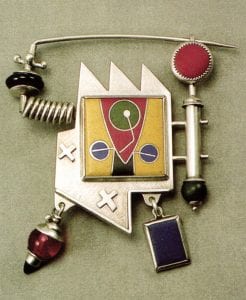 During my last visit, I wondered if Brummel defined himself as craftsperson or artist. “I defy, confront, and resent the arrogant barrier between artist and craftsmen.” Refusing to categorize himself, he prefers to straddle the rather ambiguous line, a delineation that is probably more a public execution associated with a skilled craftsperson, his works realize both. He approaches and considers his next work as would any painter or sculptor – simply on a small scale. When I left Heinz Brummel’s studio, he was back at his workbench making beautiful objects incorporating functional elements, a practice which for the artist defines craft. 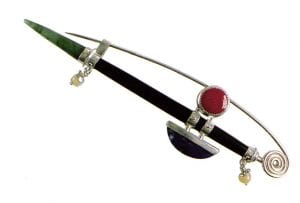 Sarah Stonich is a writer who lives in St. Paul, Minnesota. 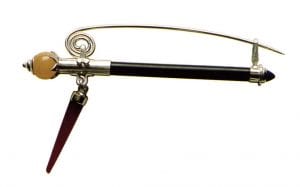 All articles by this author
Previous Ken Vickerson: Mind and Matter
Next The Story of the Purple Heart
Social media