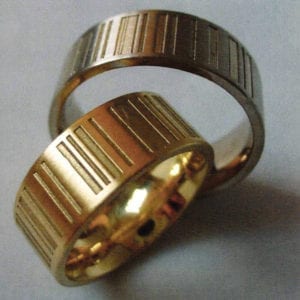 As many and varied as the reasons may be to publicize a message or to make a very personal statement, the manners in which one can go about accomplishing it are equally manifold. Some people sit down and write a book – others design jewelry. 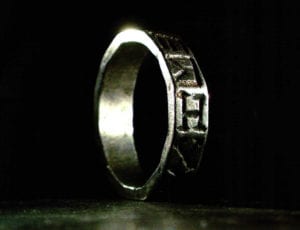 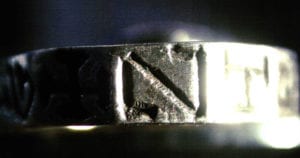 Experts from Halle and Munich required almost a year in order to decode the religious inscription on a medieval, silver ring. The so-called “Paußnitz Ring” was found by a Saxon landowner on a field over 100 years ago. It was believed to have been lost for many years, but its engraved symbols have recently been decoded. The special feature of this finger ring, which is over 850 years old and which probably belonged to a crusader, is its dodecagonal form. Each of these twelve fields on the outside of the ring bears symbols and numbers that appear like letters. In laborious, detailed work, the experts discovered that the Irish script that was used until the 9th century was inversed and altered for use as templates for most of the symbols. The Munich-based historian and theologian Olaf Röhrer-Ertl translated the inscription “NEINE Ml XPS” – which means as much as “negate (or destroy) me, Christ”, as a symbol of the deepest religious dedication in order to attain salvation – an expression of the most private piety of the person wearing it. The extremely clever coding of the message also permits us to draw conclusions on the author or manufacturer of the ring: experts believe that he must have been a scribe with mathematical education, that he was familiar with the magical symbolism of numbers and that he was skilled in the writings of long dead ages and not only in the majuscule styles of the Gothic era that were becoming fashionable at the time. 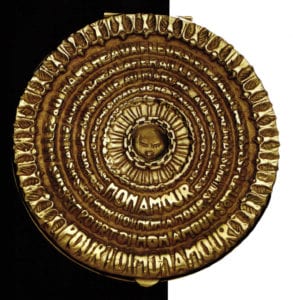 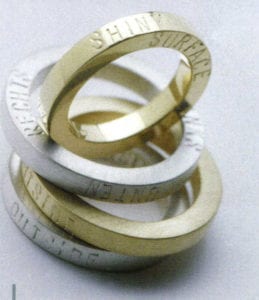 The concept rings by RingProjekt that are stamped with the individual letters form a symbiosis of design and artistic concept. Jewelry as a description, irony or encouragement

Imaginative or just for fun

Whereas the fashioner and the wearer of the legendary Paußnitz Ring truly had mysterious thoughts on their minds, drafting their strong declaration of belief in a jewelry form, some messages that were later stamped in gold or silver appear refreshingly decorative and unencumbered. The use of letters and words as a sign of symbolic uniqueness has been a popular element of design time and again over the course of the centuries. The French artist Line Vautrin (1913 – 1997) loved engraving ornamental writing into the cigarette cases and powder boxes she designed. She decorated and literally covered their surfaces with image riddles, so-called rebusses, consisting of images, letters and numbers to form proverbs and sayings. In addition to poems by Dante, Apollinaire or Paul Valery, which she kept for posterity in gold and silver, the artist also quoted common sayings such as “silence is golden” or “the devil finds work for idle hands”. 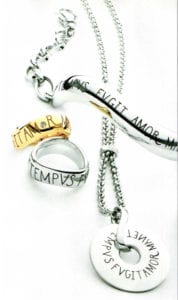 Faithfulness is en vogue in our mercurial age. The jewelry in the Wempe Silver Collection is the proof: “Tempus fugit amor manet – time passes, love abides”

Even today, jewelry still bears many words and symbols. This may be a declaration of love, a name or two, a poem, a wish, a promise or a greeting – they are all expression of a personal message. It is entirely of no consequence whether they are on rings, bracelets, pendants, brooches or cufflinks, whether they are large or small or in capital letters or freehand writing. The message itself is all that counts. Men and women feature in equal measure in the huge variety of possible designs and incurable graphomanics can draw just as much pleasure as convinced romantics. After all, personal taste is all that dictates the contents: whereas some people may insist on a personal message, others take pleasure in funny banality. Yvonne Les Crinier has designed a ring for the latter group, which bears an eternal truth on the addictiveness of shopping for female consumers: women always buy something. 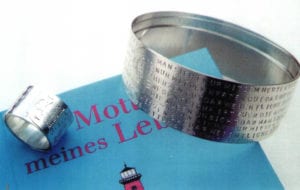 “But the eyes are blind. One must look with the heart” is the inscription on one of the bracelets that Ariane Hartmann created to mark the 10th anniversary of the organization “Children for a better world”

Jewelry as a means of communication

Manufacturers of engagement and wedding rings in particular are aware of the fact that jewelry can express things that would otherwise require long conversations. Although the message is mainly a name or a date that symbolically stands for the eternal faithfulness and love between two partners. The imaginativeness of contemporary designers shows that almost all wishes and thoughts can be communicated in jewelry. 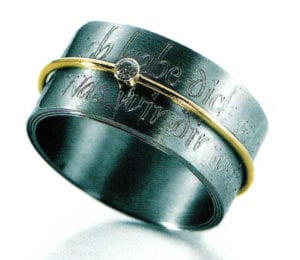 A ring as the symbol of life – with a start and an end. Stefan Todorov marks it with words that are irrevocably linked to the person wearing it 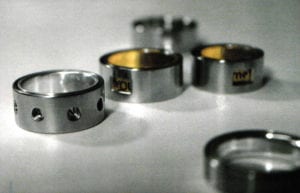 A small rotation changes the message. “YOU and ME can make the world go round” is the name of the series of turning stainless steel rings with silver or gold by Simon Dussler

The Dusseldorf-based designer Ariane Hartmann has for a long time used the written word to design her “Motto Collection”. She stamps a repeated series of certain mottoes on a thin band of silver. These mottoes cover the entire band, which can be rolled up as a pendant, a ring or a bracelet. The person wearing the jewelry memorizes sentences marked in the metal such as “l am valuable” and “therefore find a way into his or her own soul”, believes Ariane Hartmann. She has now completed a project in cooperation with the publisher Florian Langenscheidt, which combines the joint work between these two creative people. Langenscheidt, who publishes a book collecting the favorite sayings of German VIPs under the title “Motto meines Lebens” (Motto of My Life), is also a member of the charitable organization “Children for a better world”. To mark the tenth anniversary, Ariane Hartmann engraved ten of her rings and ten of her armbands with a motto from the book. In addition to the marking 1/1 as a sign of its uniqueness, each item of jewelry also bears the year and the logo of “Children for a better world”. At the start of July, the limited edition of rings and bracelets were awarded to people who had offered particularly distinguished service to the organization. 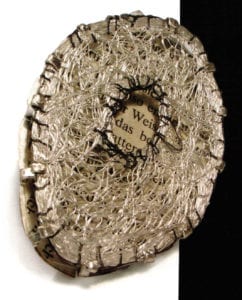 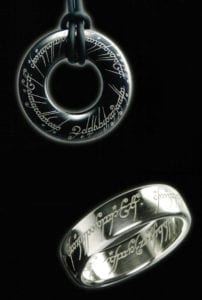 The jewelry designer Sabine Ring-Kirschler drew inspiration for a literary jewelry collection from her love of lyrics. She started work on it two years ago by engraving texts by the German poet Else Lasker-Schüler on precious metal in her own, very striking hand. She has now started writing her own texts and also takes on wishes from her customers. Her poetry series now includes various rings, pendants, necklaces and bracelets. The contents range from known quotations such as “to be or not to be, that is the question” through to romantic texts such as this one: “Come to me in the night on seven star shoes and love wrapped in my tent. Moon rises from dusty heavenly chests…”. As part of his participation in the competition “Symbol II Awards 2000”, the jewelry designer and lecturer Stefan Todorov considered the topic of “Jewelry as a Symbol”. He considered questions such as: can forms have contents and how can I hold this unit for posterity? This gave him the idea of creating a ring that would remain clear in its statement over centuries. His “Text Band Ring”, which received first prize in the competition, consists of a titanium band of any length that is marked permanently with texts, images and pictograms. Just like real life, this ring has a start and an end. What is written on it cannot be reversed and – just like in real life – things can be added, but nothing can be taken away. A date of birth, a wish, a promise or a final farewell greeting – texts consisting of many thousands of words find space on this, the most individual of all items of jewelry. 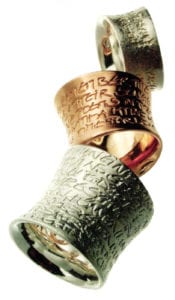 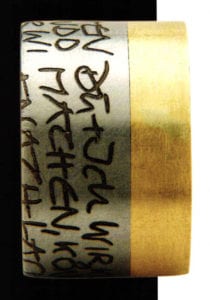 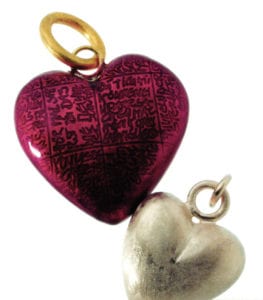 Popular lyrics, own texts and customer wishes are kept for posterity in the jewelry by Sabine Ring-Kirschler, which she engraves in her own striking hand 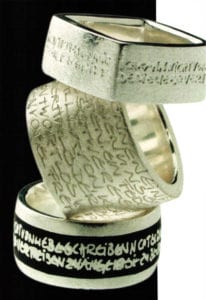 Contemporary jewelry designers have come up with some fascinating methods in order to encrypt messages in the same almost perfect manner that the author of the Paußnitz Ring used Nicola Brand, a qualified designer and holder of many awards, uses barcodes for this purpose. In our mercurial world, characterized by a flood of information and data, she also uses barcode technology in order to send very personal messages exclusively to the person wearing her rings “A Word for You”. On the outside, the engraved symbols appear clear, graphic and cool, but in “translation” they may hide a very personal wish or a secret longing. In this way, the mysterious content contributes to the material value of the ring by adding an ideal value. 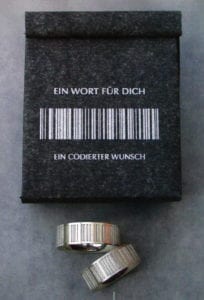 The messages on Nicola Brand’s jewelry are barcodes that are reminiscent of everyday products. However, their encryption creates a very personal relationship between the jewelry and the person wearing it. 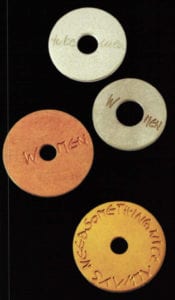 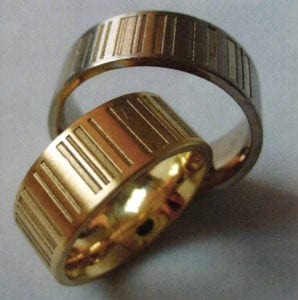 What may appear like a decoration of lines and points at first glance reveals itself on closer inspection to be a ring from the workshop owned by Norbert Zimmermann. The Bamberg-based artist adds individuality selected texts to his rings, which he then encrypts using a Morse code alphabet Zimmermann’s Morse code jewelry, which comes with a decoding alphabet for each customer, can be worn by men and women equally due to its very simple, but nonetheless personal appearance. His latest project deals with experiencing decoding: he is working at the moment on creating rings with Braille writing They will therefore be a legible carrier of intimate messages for blind people also. 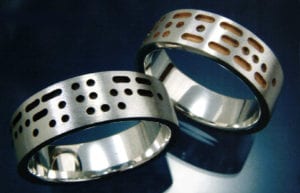 The messages on Norbert Zimmermann’s rings can only be understood with the help of a Morse code alphabet. Encrypted they remain jewelry with a decoration of lines and points 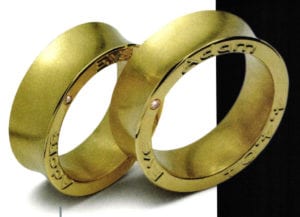 You only need two names to represent the relationship between two persons with friendship, engagement or wedding rings like those from Johann Kaiser