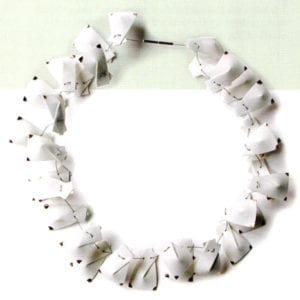 As early as during the acceptance exams, preferred creative people are selected not only for their artistic talent, but also for their ability to come to grips with the challenges of modern society. The Giebichenstein Castle School of Art and Design, in Halle, sets high standards for education, itself, and its students. 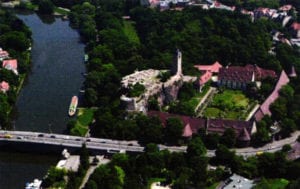 The institution we now know as the “Giebichenstein Castle – School of Art and Design” has come a long way and endured many changes since it was established in 1918 as a state school for artisan work and crafts. Located near Leipzig in Saxony-Anhalt, the castle is part of the city of Halle, a cultural hub with a thousand-year history and the birthplace of Georg Friedrich Händel. 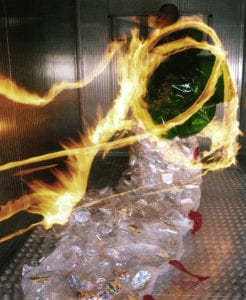 For bathing beauties great and small: enameled necklace made of copper and silver, by Dörte Dietrich

The school’s development has been influenced by the changing forces of tradition and modernity, by war, political upheaval, and the constant effort to keep in motion. In about 1920, the architect and first director of the school, Paul Thiersch, set up the first classes in architecture, interior design, sculpture, painting, and metalwork. In organizing the educational concepts, he oriented himself toward the Bauhaus principle, which had been brought physically closer to the school by the move from Weimar to Dessau. Under the former East German government, the school was renamed the “School of Industrial Design”; the castle, with its emphasis on both theory and practice, soon became an influential center of instruction for designers. When the Berlin Wall fell in 1989, the school underwent another radical change – educational programs were altered to suit new social insights, and the use of new media was further emphasized in all areas. It was also in 1989 that the school received the name it still has today: “Giebichenstein Castle – School of Art and Design.” 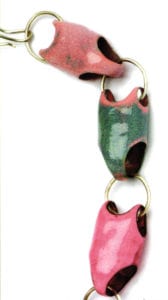 There are now approximately 900 students from 25 countries enrolled in the castles two departments of Art and Design. These departments are divided into various courses of study, among which niche areas such as “Toy and Game Design” and book bindery are particularly emphasized. The students are offered an unusually broad spectrum of free and related courses: They can choose from majors such as Painting/Graphics, Plastic Arts, Jewelry and Fashion Design, and Industrial, Communication, and Multimedia Design, almost all of which last 10 to 12 semesters and lead to a degree. 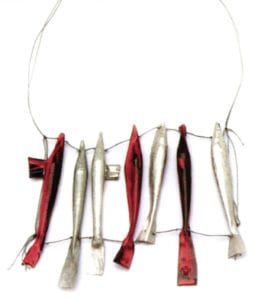 In addition to the many varied possibilities in terms of subjects and content, it is still the unified context that has a particularly important role in making the castle unusual among schools of its kind. Students’ specialization in one area of design is preceded by a substantial pillar of their studies, a two-year introductory phase during which they learn traditional crafts as well as gaining theoretical introductions to the history of art, design, and architecture. The curriculum thereafter then focuses on the chosen area of study, while at the same time leaving open opportunities for practical interdisciplinary study. After all, as the school’s philosophy runs, “…nothing is deadlier for a school than being an identity machine with fixed programs and fixed obedience to a set of rules… Instruction and research mean creating and finding problems that call for a high degree of knowledge of the real world and ability to reflect, as well as the courage to change.” 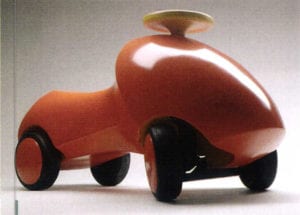 Design for the very littlest ones: this “Baby slider” was created by Franziska Berndt in the department of Toy and Game Design

Unlike at many other universities, people new to Halle and to Giebichenstein Castle don’t slip through the cracks. A full-time faculty member is responsible for twelve students, so that individual attention is guaranteed. Foreign students have the possibility of attending free German courses, and additionally of participating in special events to introduce their fellow students to their country of origin. Leisure activities and learning go hand in hand: car races, soccer tournaments, field trips, workshops, exhibitions at the university’s own gallery and numerous other extracurricular opportunities bring students and faculty together. Additional orientation programs offer extensive information on individual courses of study, costs, events, and the city of Halle. 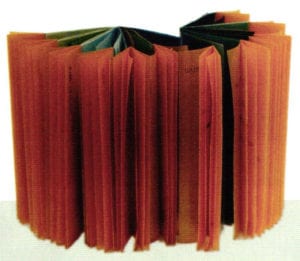 The course of study “Conceptual Art: Books” is one of the numerous things that set Giebichenstein Castle apart 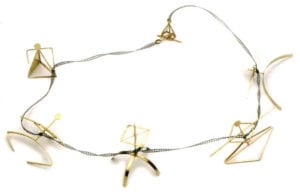 Every year, multidisciplinary projects, cooperative efforts with other universities in Europe and with firms, are carried out. The department of Ceramics and Glass Design, for instance, implemented a project this year to experiment with ceramic foils – wafer-thin foils of porcelain that are actually produced for technical uses. An exhibition is being held through November 9 at the European Industrial Museum of Porcelain in Selb- Plössberg to show the results of the students’ work, which ranges from installations, lighting objects, and product design concepts to new ideas in jewelry. 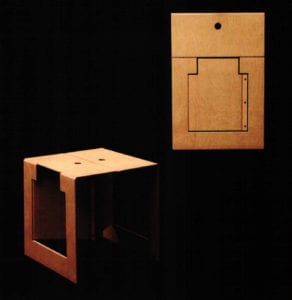 The economic aspect of life after college is also taken into account. Regular seminars and workshops prepare students with information on taxes, applications, and presentations on their future working lives. Most of the graduates go on to establish their own studios for art or design; a successful example is the designer group “Dreipunkt4,” which won the new “Halle Design Prize,” among other things, for its development and production of the folding stool “Falter” (Folder). The new distinction, which was awarded for the first time this year by the Association of Friends and Supporters of Giebichenstein Castle, will be awarded every two years to works that “on the one hand represent a broad spectrum of topics from various design areas at the school, and on the other show a certain breadth, an ability to delve deeper conceptually, and to lead to greater discoveries beyond their creation.” 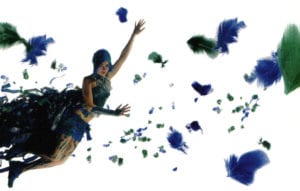 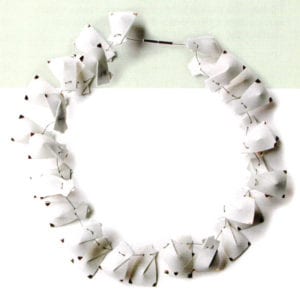 Student project with ceramic foils (flexible porcelain): this necklace made of ceramic foil and polished platinum and gold, by Susanne Bauer, is distinguished in being so lightweight

All articles by this author
Previous Frey Wille: An Homage to Art
Next Hiko Mizuno College: Japanese Jewelry
Social media