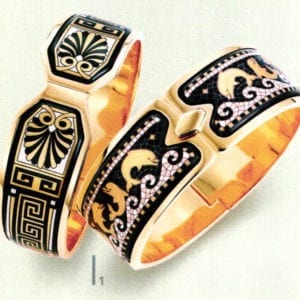 The fascinating depth and quality of the intesive colors that are created by melting stained glass on a metal surface still reamins unparalleled today. 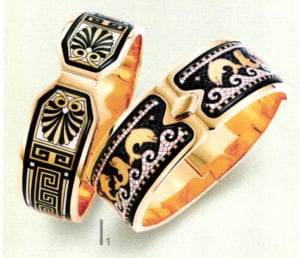 New design based on an old idea: bangles “Dolphin” and “Aphrodite” by Frey Wille

One can only speculate as to how enamel was first discovered. Indeed, nobody knows whether it was the result of determined testing in the attempt to bond glass and metal, or whether it was one of those coincidences that yielded this perfection in color. 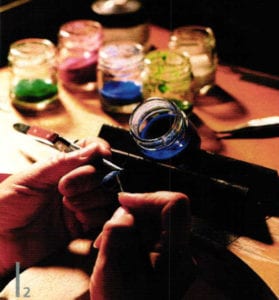 The individual enamel paints are applied by hand. A view of the Fabergé enamel studio

From Mycene to hobby cellars

We do know that the high art of melting glass, which was once used by gold and silversmiths in order to lend color to their work, developed over centuries to become an independent form of art before it fell prey to the “enamel wave” of the nineteen sixties from which it is now gradually recovering. The oldest known melting works originate from Mycene (Cyprus) and are dated back to the 14th century BC. The art of enamel has never really been lost since then. 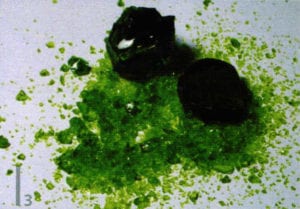 The work stages in enameling start with the raw materials – green and blue grass, not yet crushed

Egyptians, Celts and Germans were familiar with and used enamel in art and for objects of everyday use. Artistic enamel has also been known for millennia in Asia, primarily in China, and it is still used today. Many museums and above all churches contain enamel treasures from the golden age of Byzantium (the 8th century), when enamel art was developed to its highest standards of perfection in the first depictions of figures. Enamel work was also a common sight in Europe in the Middle Ages and through to the Modern Era. Cloisonné enameling was practiced predominantly in the period of the European Middle Ages. In this method, thin metal wires are bent into shape, soldered to a metal plate and the spaces in between are filled with enamel color. The Cloisonné method spread at the start of the 14th century and during the entire Ming Dynasty from 1368 until 1644 above all also in China. Some artists succeeded in approximating the opportunities open to traditional painting in their enamel work during the 12th and 13th centuries. Painted enamel rose to prominence throughout Europe in the 15th century, spreading above all from Italy and France. The School of Limoges (France) remains an important name in connection with enamel art even today. 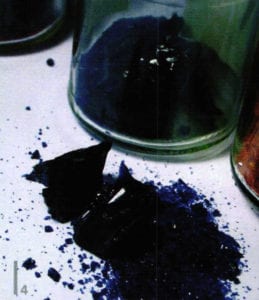 The work stages in enameling start with the raw materials – green and blue grass, not yet crushed

As small, inexpensive electrical melting kilns became available, enamel technology found its way into the hobby cellars of countless costume jewelry fans during the nineteen sixties and seventies. This vast “wave of hobby enamel”, which elevated any hobby freak to the status of a bona fide artist, made enamel uninteresting to “real” artists. In view of the fact that the basic techniques are quite easy to learn, “hobby enamel” quickly spread, and the frequently poor quality gave it quite a bad reputation. 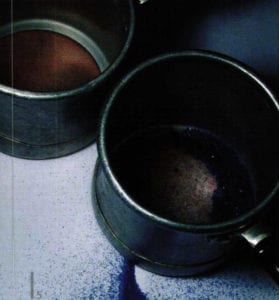 The crushed glass is sieved

However, the hobby craze has since subsided a long time ago. Enamel methods have more or less regained their good reputation at the start of the 21st century and are once more the domain of a few specialized artists and dedicated laypersons, serious about learning about the fascinating interaction between glass and metal. 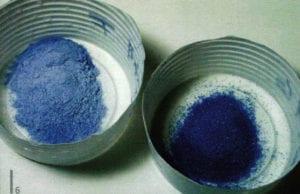 And rough granules are separated from fine granules

In essence, classic, artistic enameling only knows four basic techniques, and all other variations build on their possibilities. The techniques differ in the methods of application and the form of metalworking. There may be special attraction in combining various techniques, for example in order to juxtapose delicate elements with rough elements or translucent surfaces with opaque surfaces in order to form exciting units. If we cast a glance over the history we can see that certain enamel techniques were used or developed predominantly during the various artistic epochs and at the different locations. 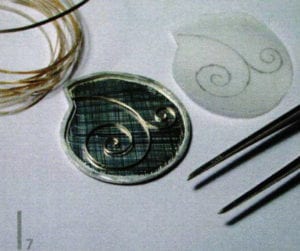 The strips for the Cloisonné are applied 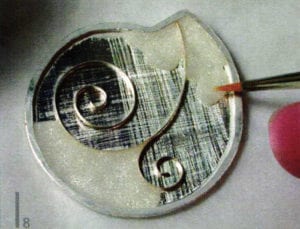 And filled with paint

In Cloisonné enamel, slim, perpendicular metal strips form the outlines or details of a motif and delimit the individual areas of color. The enamel and strip surfaces are ground down to form a flush surface. Cloisonné enamel played a central role in the art of the High Byzantium period. Variations on Cloisonne enamel include wire or filigree enamel, in which cells are formed using bent wires and then soldered to a surface. The enamel is then fired in the hollow of these cells. The entire surface can be filled with enamel, although it need not be. Whole sections can be left as exposed metal. The surface of the work that is created in this way cannot be ground. 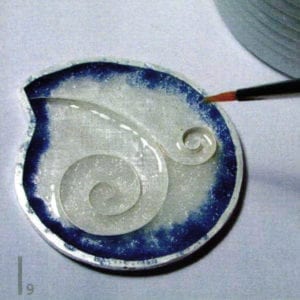 Additional colors are applied in the following stages 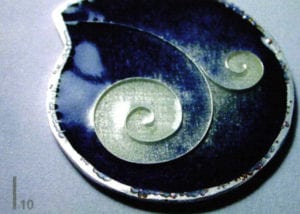 The colors in painted enamel are not produced by colored enamel, but instead using light enamel on to which one paints metal oxide paints, which are then fired in up to 50 individual processes. This technique emerged at the start of the 17th century and was applied throughout all of Europe. 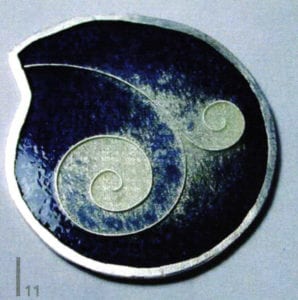 The last stage of work is the so-called gloss firing

Plique à jour enamel is fashioned using perpendicular rods, like in Cloisonné enamel; however, the metal base plate is removed in Plique à jour after firing. In order to achieve this, the base plate is coated with a thin metal foil, for example, which can be etched off again after firing. Once the backboard has been removed, the work is transparent. The enamel can be filled up, ground or fired in the hollow. Like enamel art in its entirety, this technique played an important role in French Art Nouveau above all. 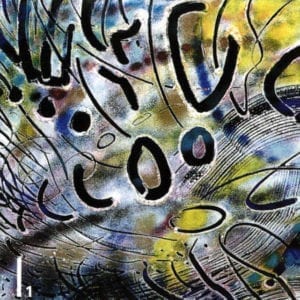 Enamel work on sheet steel by Herbert Martius, whose works of art are fitted to numerous private and public buildings

The two variations of en ronde bosse and steel enamel are required primarily for sculpture and architectural work. In enamel en ronde bosse, figures are completely enameled as sculptures. This technique, which was developed and was popular in the Late Gothic period, was generally applied with white, opaque enamel on a gold base. Steel enamel is the counterpart to the aforementioned, artistic variation, which is primarily applied in consumer goods or in architecture. The range stretches from bathtubs to salad sieves and even large picture boards. Steel enamel uses weatherproof, impactproof and opaque enamel colors that are fired on to sheet steel. 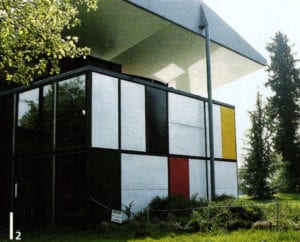 The “Heidi Weber House” in Zurich, the last building by the architect Le Corbusier. The brilliant vividness of the individual modules made of single-tone enamel boards has kept well since the house was constructed in 1967

The types of enamel

There are again four subdivisions, which differ considerably from each other: 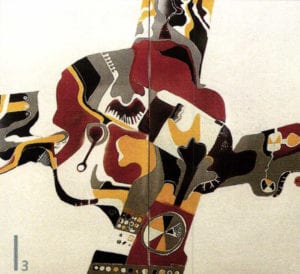 Enamel board by Renate Kreibich-Fischer in a Berlin Underground Station

Opaque enamel is non-transparent enamel; its color is independent on the metal beneath. This means it is particularly suitable for beginners, as it can be fired easily. 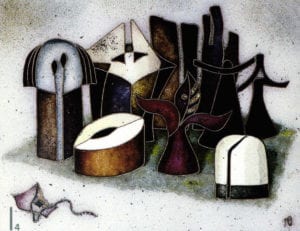 Transparent enamel is completely transparent; its color is dominated by the metal base. Like opaque enamel, this form of enamel color cannot be mixed. However, in view of the fact that one can see through several layers, it is possible to mix on this basis. 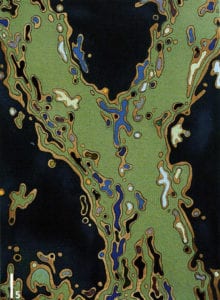 Two examples of Champlevé technique that show how different the results can be. The picture boards by Bettina Schöpfel appear almost like silk painting

Opalescent enamel is in between opaque and transparent enamel. It is translucent, allowing light to shine through, but neither transparent nor opaque. As the name suggests, it is reminiscent of a shimmering opal. 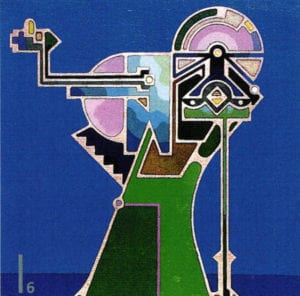 Picture board by Kai Hackemann from Düsseldorf

Painted enamel consists of very fine, opaque powdered color with a high color density. It is fired at as low as approx. 750 degrees Celsius. As they are very fine, the colors can be mixed easily. They are painted and applied to the generally light backgrounds using a brush. 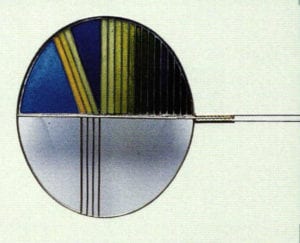 Enamel – a technique for the patient

Metal and glass: It is fascinating to observe how these two materials flow together to form a unit, melting together during the numerous material experiments and the growing dexterity of the artist. The period required between the inkling of an idea and the completion of a piece is also fascinatingly long. Hardly any other form of art requires the same degree of patience as enameling. Sketches, trial firing and a constant stream of (failed) attempts are rites of passage for anyone involved in enameling. However, enamel artists can be certain of one thing: Anyone involved in creating enamel work is following a very very old artistic technique. In all places and at all times, its development required one thing above all else: Patience of the Gods. 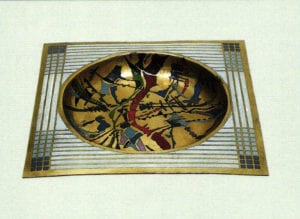 Theresa Fischer is one of the few artists who not only decorates receptacles with strongly colored Cloisonné and Champlevé enamel, she even makes the receptacles herself 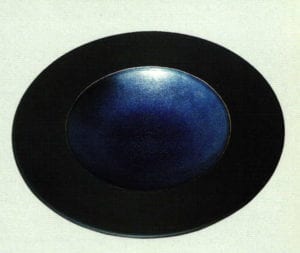 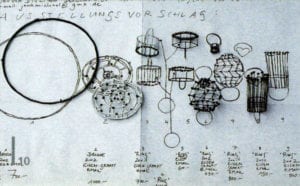 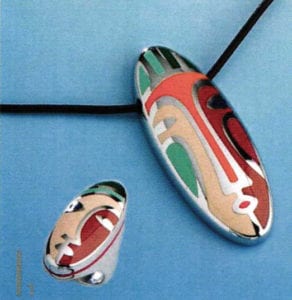 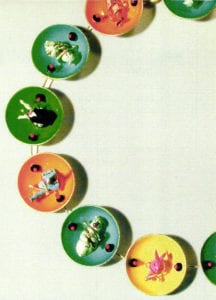 Bruna Hauert combines the old craft skill of enameling with reserved humor. Her “Trophy Necklace” is a magnificent example of her work 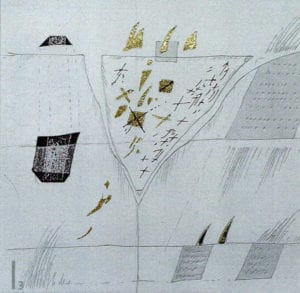 A particularly technical method that Brigitte Bette developed allows her to scratch free graphic images with a spontaneous, signature character on an enamel surface 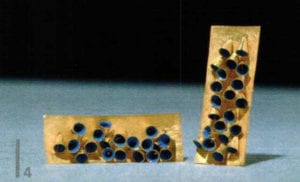 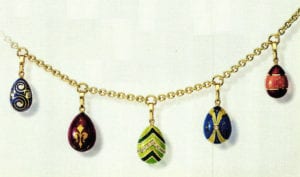 Fabergé has cultivated the high art of enameling since the times of the Russian Czars, when Czar Peter was initiated into the magnificence of the “colors from the fire”

“Enamel does not discolor, it creates color directly and therefore preserves its own value”, says the artist and philosopher Horst Bachmayer on the unification of glass and metal in fire. Five object, set in tin foil 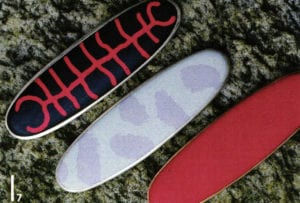 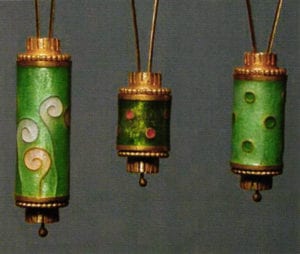 How do I bring luster back on Lapis Lazuli

Which torch to upgrade to? Centec or Smith Little Torch

Anyone looking to market their Jewelry?