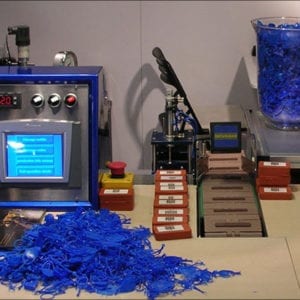 Bored with early retirement, Michael Racine, CEO of Castel Technologies in Hod Hasharon, Israel, decided to re-enter the jewelry business when he learned a casting workshop was available. “When we visited the place, I was amazed to see that in the 21st century people still injected rubber molds by hand they like did 50 years ago,” he recalls.

Racine and his son, Ittai, a physicist by profession but a top engineer, passed on purchasing the dated facility and equipment, instead opening a new tech-savvy casting workshop. It was here that they designed the Etype automated wax injection system that earned them a 2011 MJSA Thinking Ahead Award. 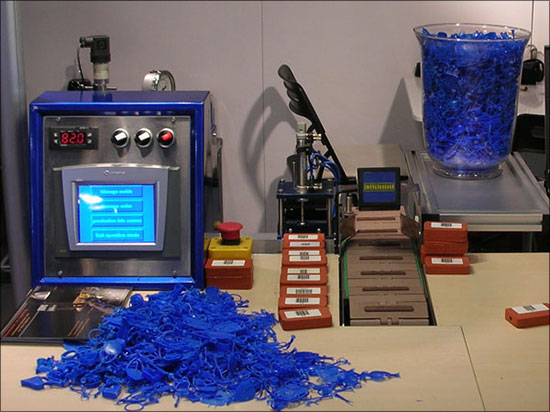 The system features a motorized conveyor belt that brings barcoded molds to an injection station. There they are read and injected using the corresponding stored parameters, then returned on the conveyor belt to a worker, who removes the wax and starts the process over again. The number of wax injection stations used varies between one and four, depending on the volume needs of the manufacturer.

Jewelry manufacturers use their existing wax injectors with the system, as Castel can install any injector on the Etype machine. There is no reason to change wax or rubber molds, either. The system is designed to take a manufacturer’s current manual wax injection process to the next level. “For any manufacturing jeweler that has more than one injector, this machine will change his life,” says Racine. “It will give him expansion ability without increasing his staff.”

The basic Etype model with one wax injector can produce 360 waxes per hour with one worker operating the machine. With two workers on it, about 5,000 waxes can be produced in one 8-hour shift. The larger Etype 4, which has four injectors, can produce more than 10,000 waxes in a day. Thinking Ahead Awards judge Chris Ploof, owner of Chris Ploof Studio in Pawtucket, Rhode Island, sees a place for the machine in both the small and large casting shop. “The equipment is great for large manufacturers, as it can replace multiple technicians with one person,” he says. “It’s also great for small manufacturers, allowing one person to do the work of several.” 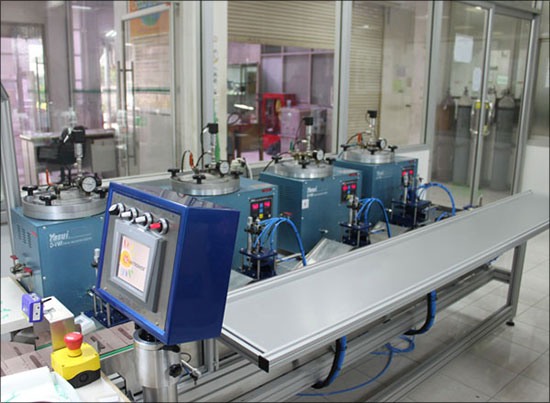 Castel’s system reduces the number of skilled employees needed for wax injection, instead putting their knowledge to use on the front end to program the parameters. “It takes six months to a year to be a good wax injector — it’s a very, very highly skilled job,” says Thinking Ahead Awards judge J. Tyler Teague, owner of Jett Research in Johnson City, Tennessee. “This takes the really highly skilled workers and has them figure out the best properties for the molds. With this machine, you can hire operators off the street. In a couple weeks, you can have them making great waxes — at a much lower pay rate than your expert wax injector.”

The improvements of the Etype over conventional methods don’t stop with speed. The system features a pressure sensor with a resolution 100 times higher than others on the market, measuring increments by 1 millibar versus the usual 100 increments. This enables the pressure to be adjusted with extremely high accuracy, offering two benefits: less wax cleanup from too much pressure being used on a mold and, more important, decreased weight differences between waxes from the same mold. “You always get the same weight for the same product,” says Racine. “In manual injection, the weight of the identical products can be significantly different — and with today’s precious metal prices, you want uniformity.” 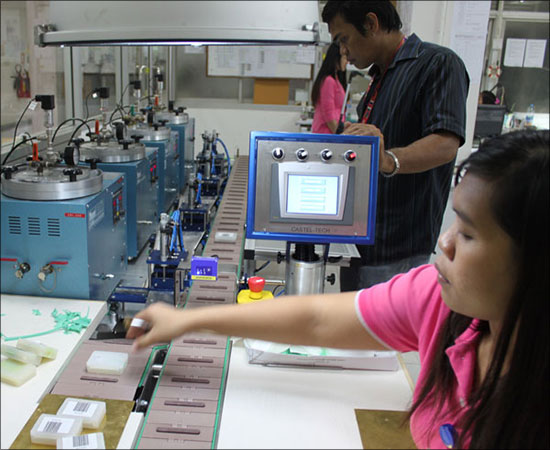 The poweful computer that runs the programmable logic controller (PLC), which stores injection parameters for up to 3,500 molds, simplifies many procedures, such as keeping track of the output of a particular mold. The quantity of wax patterns needed for a certain job is input into the PLC and, when the number is reached, the system pulls the mold off the conveyor and puts it in a finished mold.

Castel chose to use proven technologies, including barcodes, with a long MTBF (Mean Time Before Failure) to reduce technical problems. “We applied this same philosophy everywhere, so one can replace a pneumatic cylinder at any shop of this kind anywhere in the world,” says Racine.

He’s also learned from personal experience that it can be difficult to analyze a problem in a factory thousands of miles away, so he designed the Etype with a USB cable that connects to a laptop or PC. “We can connect to it through the Internet and have full diagnostic capability — no matter where the machine is in the world,” he says. “It is like our technician is standing with his laptop next to the machine.” Racine adds that maintenance for the machine is as simple as keeping it clean — especially the barcode reader.

Discussing its many benefits, Racine says the bottom line is the labor savings the machine provides. Add to that the promise of more uniform waxes and the ability to keep close track of production, and the Etype system could be the answer to streamlining wax injection for a number of jewelry manufacturers around the globe.