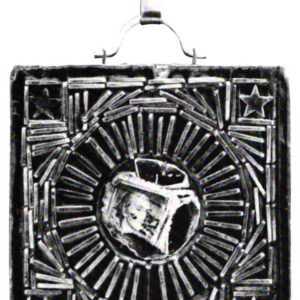 The Ethics of Materials

by Keith A. Lewis

I have always thought that if no other lesson had begun to seep through peoples’ inertia and greed, that at least a sense of the fragility of the earth and an obligation to ecologic diversity had begun to be routine.

But reality intrudes, I’ve heard a friend justify his job with General Dynamics by saying, “Well, you’ve got to pay the bills” and his elephant-skin boots with, “They wear like iron.” I made a feeble excuse for my friend, “He’s not an artist; he doesn’t deal in symbols and implications. He doesn’t understand the meaning in everyday things.”

Then, recently, in the booth of a young metalsmith I saw an enormous ivory bracelet. Stupidly, it had never occurred to me that thoughtful artists (did I believe in any other kind?) still used materials like ivory. Years ago I burned the only ivory that I’ve ever owned, a chess set, given to me when I was young. It seemed only right.

An interlude of simple facts:

Exotic woods are not sacred per se—but taking down one tree out of a thousand and burning the rest, in a habitat that harbors thousands of species and provides the air that we breath, is obscenely short-sighted. Is a handturned bowl worth that price?

Gold and diamonds are not bad per se—but when they might come from South Africa, when the suppliers won’t specify their source, when they may stink of apartheid and slavery, well, that’s a heavy burden for a pair of earrings. This idea of “burden,” of the implications and meanings that craft objects carry with them, has been discussed in these pages by Bruce Metcalf. But in addition to placing burden into the things that we make, we must look at the burdens that our objects already bear.

Action is called for when change occurs, things that once looked innocent become evil or foolish. But an affronted cry always rises to the rooftops: “It won’t make a difference. so why do it?” This helpless and disingenuous evasion always covers two deep, important fears. The first is the fear of economic harm: (“I don’t have time to think about this; I have a business to run” or “My customers will only buy things with ivory or diamonds in them”). These are unacceptable excuses because pecuniary concerns cannot have precedence over moral ones. The second underlying fear is the fear of change. In our case, this fear is partly tied to the redefinition of the precious. Confronted with jewelry made of plastic, aluminum, bamboo, we cling to the traditionally, precious. 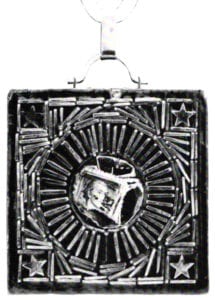 J. Fred Woell, Fetish Pendant , 1966
Wood, brass, copper, glass, steel, paper, silver stars, 3½” sq.
I remember back (now 28 years) to when my professor in grad school told me about diamonds and South Africa, and that was the first and last time I’ve ever used a diamond. I remember also learning about ivory then, and I still have some ivory scraps left over from the last pieces I did in that material. I can’t seem to bring myself to use it up. I never care for out “throw-away” mentality. I believe in recycling as much as possible—solar, wind energy, etc. I say these things not to sound righteous. It’s just me. This is how I feel and how these feelings brought me to create Fetish and a lot of the work that has followed.”

We often deny responsibilities and evade duties; we ignore the obvious and disdain the subtle; we cite powerlessness or insignificance to justify our lack of involvement in the exercise of what is right and wrong. We forget that context is crucial, that once-trivial things now loom large, that we hold the key to the survival of much that is important.

We have a responsibility to try to make a difference if only by a gesture. Gestures urn insignificance into power. They change the worthless to the precious. This is important, because we make precious things.

As artists, we have a feebler excuse than most for avoiding important gestures, because what we do depends on understanding, deep down, the meanings, implications and truths of what we make. We must understand not only what we intend our work to mean, but what baggage and burdens our work takes on because of the context of our world.

Ivory is beautiful . . . but, its beauty, today—now— is a veneer on death and on the disappearance of a species. Ebony holds more than dark luster it holds loss and profligacy and promises to take much with it. Gold and diamonds, no matter how beautiful, in their robber-baron ostentation hold a medieval disregard for human dignity.

By Keith A. Lewis
Metalsmith Magazine – 1989 Summer
In association with SNAG‘s