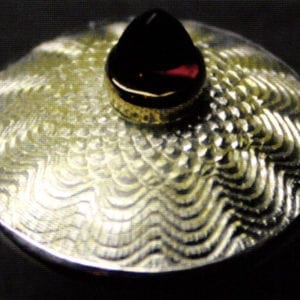 I do engine turning on precious metal. It is a joy. The finished work is so bright that I think of it as designing with light. It would seem that anything else you do to it, would diminish if not ruin its beauty. However, there is one technique that has been used to color engine turned work for several hundred years, basse taille or vitreous enamel, which is applied to engraving or low relief metal work. The technique is so closely associated with engine turning historically that it has lost its place to Guilloche; the French term for engine turning done on a rose engine (tour a Guilloche). 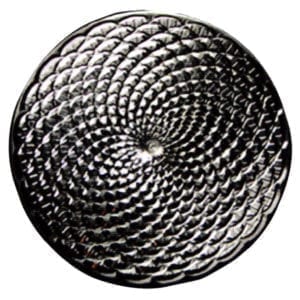 I own and operate Dorsa Studios and for more than thirty years have been working in the decorative arts. I am a bench man and make things with my hands. I am also a student of art history and the history of technology. Engine turning is a term used for engraving with the machinery in my shop. The machines I use are the rose engine, a straight line engine and a brocade engine. Uses include engraving precious and semi-precious materials for jewelry. They are hand operated and date to the late 19th and early 20th centuries. 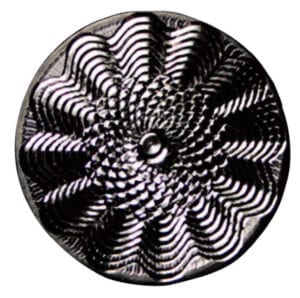 Engine turning metal for my enamel work led Mr. Carpenter of Thompson Enamel to visit my studio this past August. A whirlwind meeting two weeks before the conference led to a tour and demonstration for 30 participants of the recent conference. It was fun and everyone had a good time. It became clear, enamelists want to work on engine turned metal. The enthusiasm was overwhelming and it was decided to market our engine turned patterns for Basse taille. 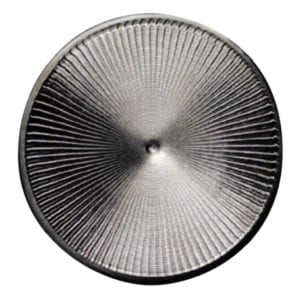 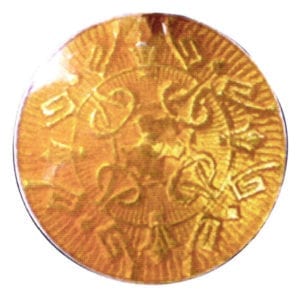 The other three patterns are cut using the brocade engine. See patterns B-al, B-2 and B-4. The work is slow and precise. It is the ability to lay one mirror-bright, engraved line with extreme precision next to another which gives these patterns their unique brilliant surfaces. Moiré, chatoyance, even interference occurs as light moves across the engraved metal and is reflected back through colored enamel. 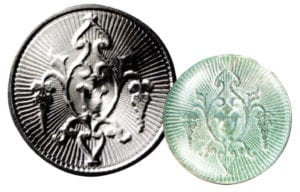 Basse taille is often defined as enameling over a low relief, resulting in various shades of a single color which corresponds to the varying depths of the relief. This is accurate but says nothing of what is possible. You only have to look at a handful of historic guilloche and enamel pieces to realize the potential of this type of engraving brings to your work. No other way to generating a geometric pattern on the surface of metal that can make light move and dance like engine turning. 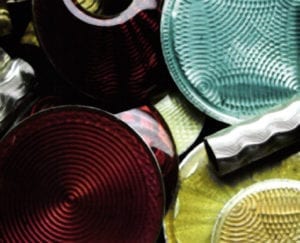 Pattern B-2 enameled with TE Peppermint, fired; one thin layer of TE Opal Green, fired. Then three layers of TE Peppermint fired successively. All enamel has been dry sifted and firings are done at 1450° F for 1 ½ minutes.

A great example is pattern B-a1. This pattern offers subtlety and dynamic potential at the same time. It is radial in the way light moves, swirling around the center but it also has distinct spokes radiating out. The pattern is made using a 96-tooth rosette cut very slowly and carefully on the brocade engine. Fired with a few layers of any transparent color would make the perfect ground for miniatures. 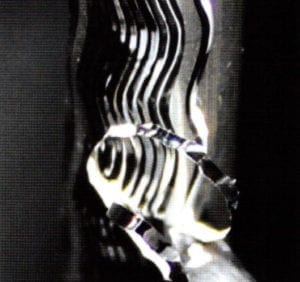 Simple, single color, with shifting. Wavy, classic basse taille over guilloche. The final two are simple four starting points each starts at rim and cuts to the middle.

Difference Between Rose and Brocade Engines

Engine turning is a process where the work piece is fixed onto a frame. The frame can move and follow a pattern. The pattern may be a round cam (rosette), linear pattern bar or in some cases a continuous low relief. A cutting tool is fixed into a separate tool post on a slide and that cutter is engaged with the face of the work piece. A hand crank is used to move the work (as it follows the pattern), across the point of the fixed cutter (the work moves, the cutter does not). This cuts a uniform line into the work. Much of the time, each successive line is spaced so close to the last that the entire original surface of the work is removed. I may choose to vary the spacing, width, depth, or the starting point of the cut (relative to the pattern). Or, I may lay one plain circle inside the last. Regardless it is the precise control with which each cut is made that creates the reflective qualities that make engine turned surfaces unique. 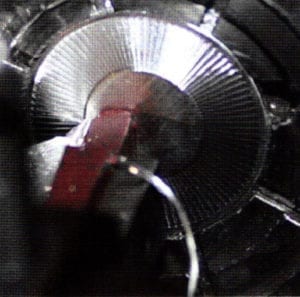 Patter B-a1 is cut on the brocade engine. The width and brilliance of the chip as it spirals away from the cutter indicates depth of cut, sharpness of cutter and correct speed for the type of work.

While the rose and straight line engines can only make one cut with each turn of the crank, the brocade engine makes one continuous spiral cut from the edge to the center at the same time the work is turning. It is also the only machine where, as the cutter moves across the work it also moves in and out of it. Straight line machines are rarely used to produce low relief pictures, though they are capable of it. Creating images from a master pattern is the main purpose of the brocade engine. The Rococo is inspiration for B2 and 1930’s Chinese block printed paper for this nearly symmetrical pattern, B4. Photos of brocade patterns capture what the unaided eye has a hard time seeing, the spiral. Cutting a brocade pattern so that it really glows is perhaps the most difficult of the engine turners skills to master.

The large red earring is cut with wavy concentric circles. The light and dark bands appear to move as the carrying moves. The 4.5mm silver tube beads are cut on a straight line engine.

It is tempting to try to explain the nomenclature as well as the mechanics, but there are two sites that you should explore if you want to learn about the art of the Guilloche. I will say that these machines date back almost 400 years and that in the 18th century the function of each of these machines were all rolled into one; known as a rose engine, in French, tour a Guilloche. The work we think of today is usually late 19th and early 20th century. The work of Faberge is what most people think of when it comes up. Very few people can visualize any of the machinery and you should check out www.rgmwatches.com/engine.html a clear site with videos and pattern examples. Also check out www.pedge.co.uk – the most comprehensive site. 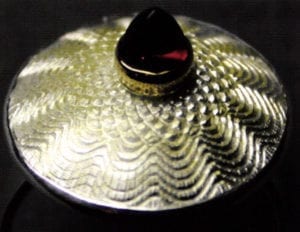 Fine and sterling silver, enamel, 18k gold, garnet. Pattern RE-2 with its concentric cuts and then deeply cut Barleycorn has been domed with a dapping punch. The center is drilled out to take the the gold bezel and the 3.5mm tube it was formed on. Three very thin layers of enamel, one opal white and two of TE chartreuse were each fired at 1450° F for 90 seconds, after countering. Make a cup bezel on the lathe and soldered it to the shank. Cut the 3.5mm tube a hair longer than the total thickness of the enameled guilloche. With the bezel and tube thru the enamel place it face down on urethane and cold rivet with dap punches. Reverse and set the 4mm garnet. Set this enamel jewel in the cup bezel and polish. Total of 2.5 hours.

For more information or to purchase patterns visit, www.trocadero.com/mdorsa or email mdorsa@dorsastudios.com.