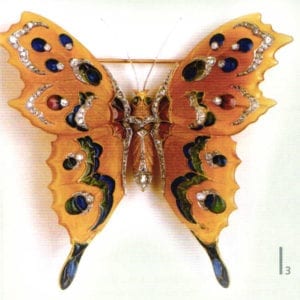 When human beings started using natural objects for practical and aesthetic purposes, horn and tortoise shell played a dominant role. For many centuries, the hand-made objects of everyday use made of horn were constant companions. As status symbols and jewelry, the animals’ weapons were of significant importance for many people with their expression that commanded great respect. One only needs to think of the helmet decorations made of bull or buffalo horn worn by warriors or the antlers adorning the heads of shaman priests. 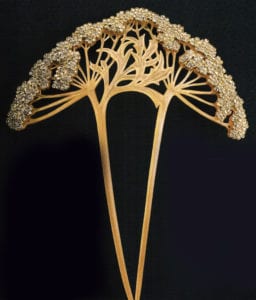 Over the course of time, processing of the natural material with its remarkable properties and its charismatic appearance became more and more artistic, until the emergence of objects made of metal and plastic, fashioned by machines, lent them no more than a niche presence. But they are still found in places in our households in the form of combs, salad cutlery, egg spoons, knife handles and spectacle frames. But now, driven by the reminiscence for all that is genuine, horn appears set to find its way back into the jewelry caskets.

Processing horn requires knowledge of the material, crafts skill, a feel for this raw material and also time. Accordingly, there are only a few artist studios in Euope that process horn to form expensive design products. In addition, the dictate of modern animal farming here means that even young calves have their horns clipped, and therefore the raw material has to be imported.

In the art of the gold and silversmiths, buffalo, rhinoceros and ibex horn are especially treasured for their rareness and the characteristics they are said to possess. Buffalo horn was held to be the claw of the griffin, a mythical creature with the head, claws and wings of an eagle, combined with the body of a lion. These “griffin claws” were worked into silver-mounted drinking horns from the 14th century onwards, a fashion that persisted until the end of the 16th century In later times, buffalo horn was also used to create animal figures. Rhinoceros horn was held to be an aphrodisiac, an active agent that also revealed when poison was present in a drink. Outstanding carving properties meant that rhino horn was often worked similarly to ivory but also milled like other horn varieties. Rings made from ibex horn were said to warn of impending danger by shattering. 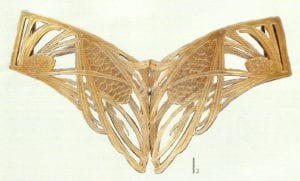 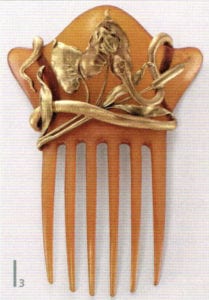 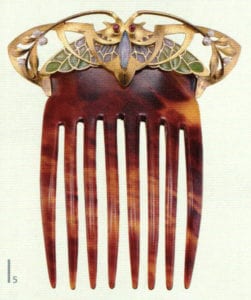 Horn in the workshop

Horn and tortoise shell are mostly worked with sawing, filing, milling and, for the visible sections, turning. Overheating must also be avoided in this case. Holes can be made using a glowing needle. Horn becomes pliable when heated in hot water. The cut open, hollow parts of the horn are bent apart when heated in hot water and placed in presses until they have cooled completely. Horn can be stained and dyed when treated with suitable solutions. Brown tones are achieved when stained in a solution of red lead, potash and water. The white coloring is achieved when horn previously stained brown is stained with pure hydrochloric acid. Yellow tones are created by soaking the white-stained horn in potassium dichromate. Horn turns black when soaked in a solution comprising 60 grams of logwood, packed into a linen bag and placed in the staining fluid and 30 grams of copper sulfate, 20 grams of iron sulfate and 1 liter of water, to which a number of oak apples in a linen bag have been added. The horn is left in the boiling lye for approximately 20 minutes. In each case, the article should be rinsed thoroughly following staining. Horn is best sanded using 0- or 3/0 grade pumice powder. For polishing, as with tortoiseshell, a solution of one part shellac and 14 parts 96-proof alcohol is used.

The following should be taken into consideration in the use and care of jewelry or objects of everyday use made of horn. Extreme mechanical stress and severe heat, also long, arid warmth (e.g. due to radiators, sun or spotlights) can damage the material. Items made of horn should also not be kept for long periods under water (risk of swelling) or put in the dishwasher or in boiling foods. When given occasional care with a touch of food oil and a thorough, dry polish, horn will provide the reward of a high gloss and permanent, strong texture. 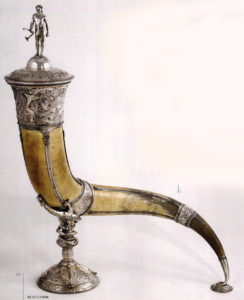 Tortoise shell is seen as the dried horn plates from the back and stomach coating and armor of hawksbill turtles. Characteristic features include the yellowy-brown color with brown and black patterning and often interwoven staining. The hawksbill turtle, also known as bissa or tortoise, is indigenous to the waters surrounding the east Indian islands and the Chinese sea. In view of the fact that it has been hunted for centuries for its beautiful shell, it is now almost extinct and is therefore covered by the Washington Convention on International Trade in Endangered Species of Wild Fauna and Flora.

In the golden age of tortoise shell processing between the 17th and 19th centuries, there was an individual crafts industry that processed the material to make furniture, boxes, cans, rods for fans, combs, housings for pocket watches and jewelry with gemstones. Spectacle frames were particularly popular.

The highest quality tortoise shell comes from around the islands in the east Indian ocean and, depending on its source, is known as Chinese or east Indian tortoise shell. But beautiful items also come from the Red Sea, revealing brown-black stains on a dark yellow background; they are sold via Cairo. Apart from the coloration, the value of the tortoise shell is dependent in particular on its size and thickness. The most expensive are thick, transparent, vividly colored, large stained items. Unique features include the thick, violet-blue examples from the Seychelles and the outwardly mussel green and inwardly black with brown shimmer and yellow-stained American material and the very large, soft, ductile, pale yellow, reddish yellow and black stained items of tortoise shell from the island of Bourbon.

In its properties, tortoise shell is very similar to horn, although it has a finer consistency. In other words, it is not as fibrous or flaky. This means that it is even easier to polish. Processing follows the identical patterns as horn, i.e. softening with simmering water and compression, and then soldering in dry heat. Imitations of tortoise shell are produced by pickling white horn with bone paste and similar materials to create comparable colors and patterns. Or also by compressing waste from genuine tortoise shell. 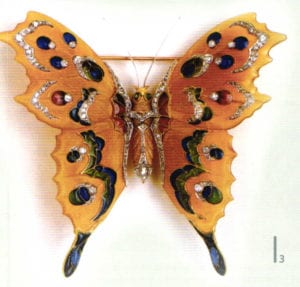 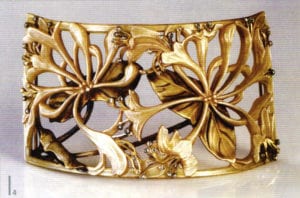 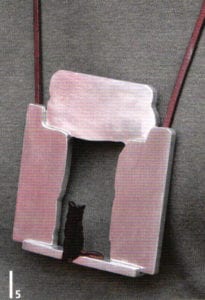 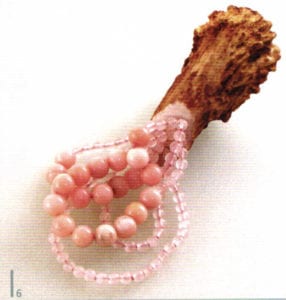 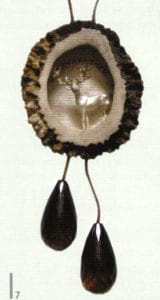