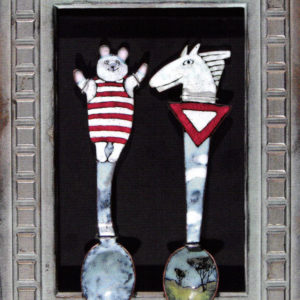 The Enamelware of Radka Urbanova

Radka’s first encounter with enamel was in early childhood. She used to go to an Orthodox Church with her father and at the end of the service all participants kissed small enamel cross held by the priest. The cross possessed unique, extraordinary color, unlike anything she had ever seen before. The color was like the flavor of forbidden fruit; she couldn’t understand how something could have this presence, until later, when she learned more about the materials and process.

This came about while attending a grand exhibition of enamel art in Budapest, in 1984. She admired all the work that was exhibited. A ceramist friend, who also attended the exhibition) was fascinated with an enameling demonstration presented there. After the exhibition he purchased all the necessary equipment – a furnace, enamels etc. and offered Radka the use of this equipment if she learned the process on her own. 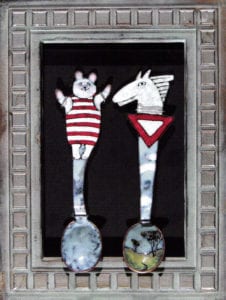 It was a long learning effort, with many secrets slowly being revealed. She had studied at an Art school, but it did not involve any formal education in enameling. This she has done on her own through trial and error – and play. After ten years of continually working, she was invited to attend the International Symposium of Enamel in Kecskemet. There she gained many learning experiences by watching attentively the various techniques of the old masters. 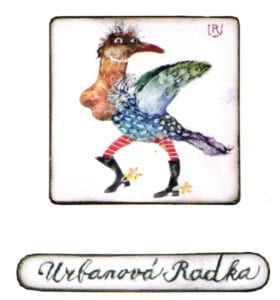 “Enameling is one of my dreams that came true. It is an honor to be allowed to work with it. It is unique among many materials and techniques. Working with enamel can result in great elation, but can also involve frustration for the enameller because of the technical difficulties sometimes encountered. “

She started with miniature paintings. On a monochromatic pre-fired enamel surface, she used the watercolor method on pieces ranging in size from 3-4 cm but mostly I cm medallions. Her imagery included landscapes, animals and portraits which were very finely decorated. The pieces were fired at least twice, but on some as many as twenty times. Her working preference is a free and experimental approach. 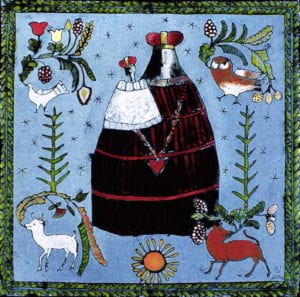 Some of her jewelry is in the form of minute moveable figures (see back cover). She starts with a drawing. Normally the drawing is divided into five parts, mostly the body (l), hands (2) and legs (2). Some works can have more than five movable parts, some as few as two. She cuts out a paper pattern to test how it works. The template is copied onto copper and parts are cut out with a scroll saw. The sizes range from 2-I0 cm. Holes are drilled for rivets.

The parts are annealed in the furnace to make the copper softer for hammering into three dimensional forms. If the copper oxide resulting from annealing is not needed for effect under the enamel, the copper is pickled in a vinegar and salt solution. The copper is then cleaned and dried. The enamel colors are prepared for use. The adhesive and enamel are applied to the metal. On some pieces wires are threaded through the holes to hang the piece for firing. After firing, edges of the parts are ground smooth and clean. Copper or aluminum rivets are used for the joining of the parts. The piece is finished by threading on beads, silver wire and/or chains. 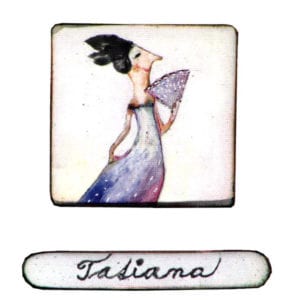 “When designing a piece, I always start with a drawing. As I proceed, I try to retain the original shape and expression because the first idea is usually the best one. I may reconsider a spontaneous action if I’m unsuccessful to my original intention. I often remind myself of a comment one of my colleague says: “If you don’t know what to do to a piece you are unhappy with, raise the temperature in the furnace and high fire .”

“I have a gallery in the historical section of Prague. There are two rooms. In the front is a sales and display area and the back room is my working studio. I have a view of a baroque monastery I have a large table which has many drawer where my enamels are stored. The table is glass topped and is easily kept clean. There is another small table with a sand bag for shaping the metal and another table for painting. I do not have a large furnace as most of my works are small in size. I have a lighted display case where my works are displayed for potential visitors. The walls are covered with enamel wall works. In the past, I have held enamel workshops here.” 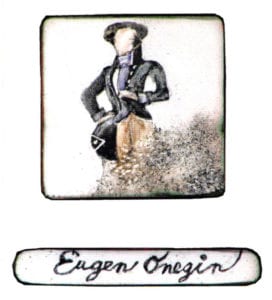 Radka’s original profession was a toy and puppet designer. “I like the world of peculiar animals and figures with unique stories of their own. In the early ’90’s I was a guest and also participant in the exhibitions of Marie Sophie Andre in Paris. I found much inspiration there. I have also been inspired by Marie-Helene Amilien at the symposiums in Kesckemet.”

She sells her jewelry in her gallery and at exhibitions. In addition to jewelry, she produces textile and other gifts, so she is not totally dependent on jewelry sales. She is a member of the Prague Artists Association which holds regular exhibitions. 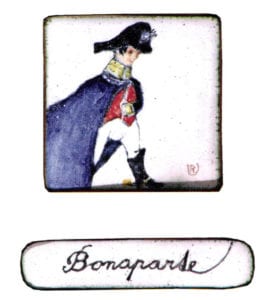 Since 1995 she has regularly visited the international symposium in Kecskemet. In 1998 and 2005, she was awarded Grand prix. In addition, she received the award Triena of enamel in Frydek Mistek in the Czech Republic. She has also received the Award of Encouragement in the Tokyo International Exhibition twice. 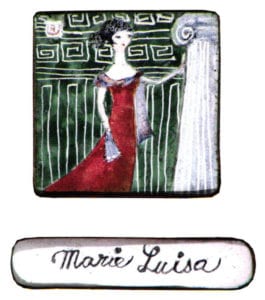 When she was raising her daughters she did her enamel work at home. She made necklaces, charms and earrings. “Every time I removed a piece of jewelry from the furnace, one of my daughters was assisting me. After the jewelry cools, I tested how the jewelry would look by holding the item against one of my daughter’s skin. They were accustom to this and considered it routine. After moving out of the house my oldest daughter also began making enamel jewelry. When she tested a bright red earring on one of her roommates, she got into trouble. She apologized to her roommate with the words, ‘Sorry, that’s the way my mother does it’.” 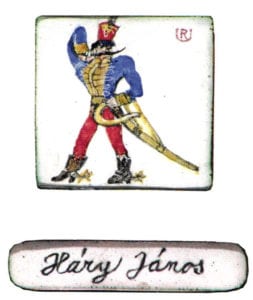 Radka works with enamels made in Kecskemet. She admires the clarity of the colors. She very much liked Hungarian pastel enamel colors which had unique characteristics, but unfortunately are no longer being made. She likes the contemporary use of both transparent and opaque enamels used in the same piece. She loves opal enamels. Over time, she has accumulated many enamels, however, they are not all labeled and she doesn’t always know what color they are. If enamels are in their original packaging, she will use enamels from Germany, Austria and France. 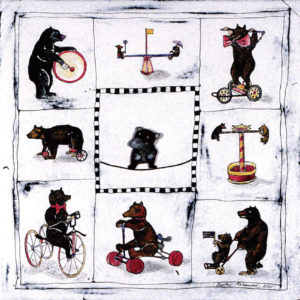 She has no special ambitions. “Moments of serenity are turned into extraordinary jewelry and pictures. It satisfies me, it makes me happy.”

Radka will soon launch a website of her work. She can be reached at her email address: urbi.radka@seznam.cz

Volume 28, Number 3, June, 2009
Glass on Metal is the only publication dedicated to enameling and related arts. Technical information, book reviews, how-to articles and insight on contemporary enamelers highlight each issue.
Category:
About the author