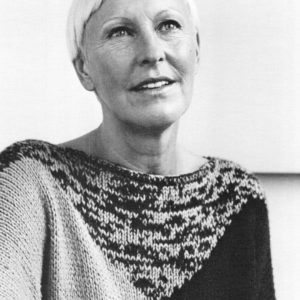 Dutch jewelry designer Emmy van Leersum, who died November 2, 1984, had been internationally recognized for over 20 years. Her work was most recently seen in New York at the “Jewelry International: Contemporary Trends” exhibition, organized in 1984 by the American Craft Museum and curated by Helen Williams Drutt.

In the introduction to the catalog Helen Drutt writes: “Both Emmy van Leersum and Gijs Bakker, whose avant-garde departures are already history, have constantly moved forward with groundbreaking ideas. Their revolt against the formal standards of modern jewelry of the sixties elevated them into international focus. The line, which is seen everywhere in Europe, is magnificently articulated by Emmy van Leersum as it lies across the body, patterns itself against her clothing, or changes from one primary color to another, framing the head and shoulders in elegant gestures.” 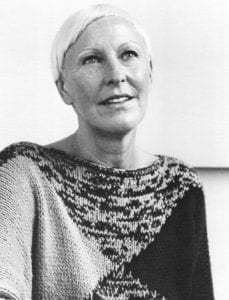 It is impossible for me to regard Emmy van Leersum as someone belonging to the past already, she was so fiercely present in her work. She expressed with all her being what she loved: clarity. In her thinking she could be very straight, heated even, when she thought that one acted injustly or when people would not make the effort to treat her work seriously. That such a straight course was also nourished by a great sensibility was perceptible in everything that surrounded her: the clothes she wore, the clarity of the house in which she lived with her husband Gijs Bakker and her son, Aldo, the intense interest she had for friends.

From the first moment at the end of the sixties, when I became acquainted with her work, Emmy van Leersum was clear: the enormous collars and bracelets, often combined with self-designed clothes, were the expression of her conviction that a piece of jewelry should not be an additive to indicate social status, but that it should be an expression of the personality of the wearer. She left behind all traditional elements that had previously defined ornament. Metal tube was used now because it was considered the most suitable shape to enclose an arm.

In 1970, with Gils Bakker, she designed a series of garments on the same principle: round-knitted tubes of an elastic material in which certain accents were introduced to emphasize parts of the body and to allow movement. These completely new ideas produced an emancipating effect. They also fitted in the general image of art at the time. A small group arose around Emmy and Gils, which managed to realize a number of very important exhibitions in a short period. This new Dutch ”style” found a response far beyond our borders, thanks to immediate reaction from Jean Leering, Riekje Swart, Wil Bertheux and Ralph Turner, among others.

The question if it was applied art or not was now out of order. A mutual recognition between, for instance, Ad Dekkers and Peter Struycken and the group round Emmy and Gijs typifies this. In addition, the Werfkelder Voor Multipliceerbare Objecten in Utrecht came into being, guided by Emmy and Gijs, which offered the opportunity to present “cubical, wearable objects and objects with light” and also “experimental clothing, multiples and graphic art that spoke of a certain mentality.” One searched for a way of thinking that “would create a relationship between dedication and personality of maker and public.”

However, the industrial making of designs was still accompanied by too many setbacks and imperfections. After a period of small series production done by themselves in their own workshop, Gils Bakker began to concentrate mainly on the design of furniture and lamps. Emmy proceeded with the development of jewelry and clothing. Here, too, it was to her a continuing surprise to see confirmed in mathematical laws her apparently intuitive interventions. This symbiosis of intuition and system was what made her work unique.

After experimenting with several methods, she started to work with synthetic material that could be bent out of a square plane. Also, for the first time. since the aluminum jewelry from 1966, she added color to a series of bracelets to act as an optical device. At the end of the seventies there was a spatial breakthrough that took shape in two ways. One was the golden bracelets—perfect lines that followed the arm and in their turn were originated from apparently simple divisions of a plane. The second was the completion of two rubber sculptures, which were constructed the same way as the bracelets, but this time out of a cube. Imaginary existing lines were made visible by transferring them into seams.

The results were soft rubber, stretched on tube-framed sculptures with straight and hollow planes. The execution of these “imaginations” demanded so much effort that after a single presentation at the Stedelijk Museum, Emmy decided to proceed in a new way. The conversion in lines that she was able to exercise in the golden bracelets and also in knitted jersey offered her a completely new scale of possibilities. Also, the search for more simple material went on in order to reach a larger public. The jewelry pieces from 1980 made of synthetic material are convincing proof. They are executed in primary colors as well as black and white.

Sometime during this period the broken lines came about, based on the principle that the line (whether colored metal or gold) breaks from a straight to a diagonal course. At the point of transition the primary color changes into a gradation of the original color. The intensity of this color gradation varies with the angle. In the golden version, this is expressed in the material thickness. Emmy van Leersum’s last work, designed in the summer of 1984, was destined for the exhibition organized by the Kapelhuis. This work was made up of lines facing each other at angles, sometimes detached with an invisible point of contact and made wearable with a connection underneath the cloth material. They came about as a series full of life and color.

It is therefore still unacceptable to me that these were her last visible lines, which have disappeared into space not measurable by man.