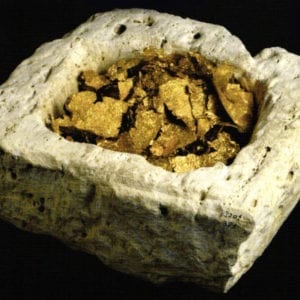 Underwater archaeology reigns supreme. Until now mainly disregarded as treasure seekers, modern methods have enabled diving researchers to delve into historical contexts to an increasingly precise degree. For example, the now renowned self-taught professional Franck Goddio (59) succeeded in discovering countless tesitomonies to antique sites along the Nile Delta off the coast of Alexandria, laying bare a mirror image of everyday life and the luxury found in the era between 700 BC and 800 AD. 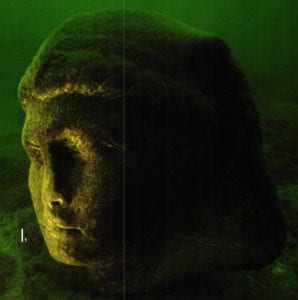 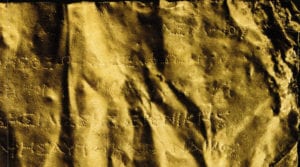 All of this is the focal point of an extensive show featuring roughly 500 discoveries from these underwater excavations from the legendary, sunken Royal District of Alexandria and the famous antique cities of Heraklion and Kanopos, located in the Bay of Abukir, which is currently touring around the world. These former centers of the antique world experienced a horrific fate over 1,000 years ago: natural catastrophies caused them to be swallowed by the sea, and popular belief was that they would be lost forever.

Naturally, the show centers around the impressive and colossial statues of kings, gods, mother murderers and the true face of Cleopatra. However, the true sensation is often found in the numerous, often small objects that offer an impression of life in the cities that sank into the seas. “Pearls of the Mediterranean” was the name given by antique authors to the places where Eukleides and Archimedes lived and worked, the location of antiquity’s greatest library and the same time a hotbed of avarice and moral depravity. However, as the many crucifixes and monastery buildings show, it was also the birthplace of a new perception of morals. 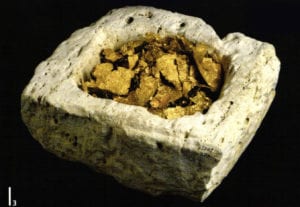 Like today’s New York, it was also the focal point of a globalized world. It houses a potpourri of peoples from Egypst, Persia, Greece, Syria, Israel and Nubian slaves, influences from many cultures that are also mirrored in the discovered jewelry. Even if there is a period of several hundred years between the Ptolemaic Heraklion and the Byzantine Kanopos, the goldsmith work confirms that there was a melting pot of cultures. For example, the Byzantine pieces reveal in parts at least an influence that is based on old tradition. This is clearly visible in two items of jewelry from Heraklion. In one case it is a golden pearl in the form of Horus’s eye or Oudijat and in the other, it is a Byzantine wedding ring made of lead. Horus was the ancient Egyptian god of the heavens and of light. One of his two eyes was injured in a battle with Seth, but healed later on magically. The Oudijat symbolizes this eye. It is seen as a symbol of power and pharaohic legitimacy and serves as an amulet. This symbol was absorbed in the Byzantine world and reinterpreted within a Christian framework.

Other Byzantine symbols or images can also be traced back to the older prototypes. An example of this is the wedding ring from Kanopos. It depicts a Roman wedding ceremony. When the couple joins right hands, Juno or Concordia was generally between the bridal couple. In late antiquity, the rite was adapted in such a way that Christ took over the role of the Roman gods.

A large amount of goldsmith work was found in both Heraklion and in Kanopos. The main finds in Heraklion were around the temple and in the Major Canal. That appears to indicate that these were sacrifices of jewelry. Lead crosses without pendants or hooks were found in Kanopos.

This hints that they were not jewelry, but instead devotional sacrifices. The lead tablets that were found and the small gold sheets with inscriptions were traditionally sacrificed to various gods during the Roman era. Conversely, other examples of goldsmith work show traces that they were worn and could also be devotional sacrifices. They may have been produced where they were found. This is underpinned by the spectacular find of a simple stone box without inscription and without any decoration whatsoever, although it was filled with gold. Might this be material from a workshop? 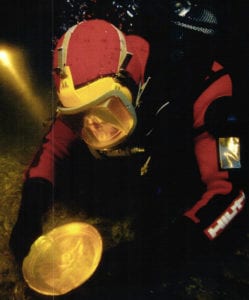 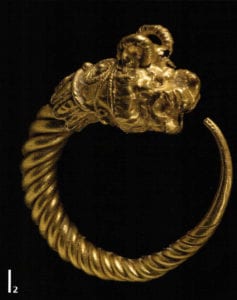 Animal head ring made of gold, approx. 3rd century BC

The goldsmith work from the eastern city of Kanopos was dispersed over a large area. The same is true of coins and seals, stretching back to the Roman and Umayyed era, manufactured mainly from between the 6th and early 8th AD centuries. More precise dating is only possible through comparison with dated goldsmith work from a Byzantine Empire and from outside. It is interesting that in terms of motifs and technical workmanship, Byzantine jewelry from the 6th to the 7th centuries AD reveals significant similarities. For example, a chain from the 6th century, originating from the workshop in Constantinople, cannot be distinguished from a chain manufactured at the same time in a different workshop within the Byzantine sphere of influence. Some forms of jewelry are found everywhere that the Byzantines left their traces. A good example of this is found in the crescent moon-shaped, broken-down earrings, but also in pendants and necklaces.

The large geographical dispersion suggests the influence of one, single and influential workshop. It may possibly be a court jeweler from Constantinople. However, it is also conceivable that there were local schools, as has been proven for other areas of art. In order to identify this kind of local workshop, one requires a lot of goldsmith work from the same place, as was found in Kanopos. If one then finds forms, motifs and techniques more frequently, not found in pieces from other provinces, one can then speak with high probability of a regional workshop. In Kanopos, for example, one finds details on a necklace with metal ball links or in the fragment of a necklace with metal ball links and a cross that reveal parallels to other Egyptian jewelry. This indicates that they were manufactured in the country, perhaps even where they were found. This suggests that there was a goldsmith workshop in operation there. But only goldsmith work from outside Egypt can be drawn on for comparisons with a unique ring bearing a structure in the form of an oil lantern. Even this does not discount the possibility of production inside of Egypt, especially if it does indeed reference a custom of Christian pilgrimage, such as those undertaken by Saint Cyrus and John, which would then suggest it was manufactured locally.

A conclusive and spectacular find was an engraved pillar constructed under Pharaoh Nektanebos I in a perfect state of repair. It is practically identical to the engraved Naukartis pillar, which was discovered in 1899. It specifies that a tithe of all goods and duties, levied by the state, must be given to the Temple of Naith. A tableau is engraved in the upper part of the stone table with its 14 text columns, depicting the King making sacrifice for Naith. The elements of hte double image show how the rules sacrifice to the goddess Naith, mother of Sais, the God of Protection, a tray with food and also a valuable golden necklace. The foods represent daily nutrition, the execution of the divine sacrifice. The jewelry may be a testimony to the rich metals held in the Naith treasure trove. It is most certain that the message at the top of the engraved pillar would be information for anyone passing by, regardless of whether they be Egyptian or of a different nationality and regardless of whether they were able to read the actual writing or not. 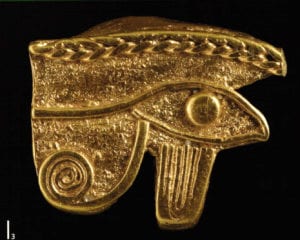 Pearl in the form of a Horus eye, late Pharaoh – Ptolemaic era 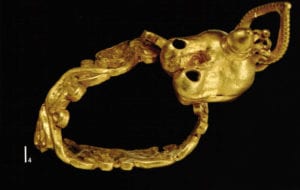 Ring made of gold with upper part in the form of an oil lamp, late 6th – early 8th century AD

Whereas many deposits yielded mainly coins made of non-precious metal and of little value, as the silver and gold items were generally stolen by grave robbers over the course of the centuries, the situation was different in the sunken cities. Hidden for centuries in the seas, and protected against stealing hands, the whole spectrum of coins that were used in the cities of Kanopos and Heraklion and long believed lost was preserved. They pay testimony to the substantial prosperity of these cities in the period between the early 4th century BC and the 8th century AD. The gold coins from the epoch of the Roman Empire corresponded roughly with a simple soldier’s monthly wage. The silver coins from the period around the 4th century BC, often imitations of coins used in Athens, the tetra-drachmas of Alexander the Great, were worth less – roughly one week’s wages. Nonetheless, they reveal that Kanopos and Heraklion were part of a comprehensive economic circle, within which silver coins represented a popular means of payment. Merchants from all round the Mediterranean were able to target the ports of Heraklion and Alexandria and conduct their business with silver coins. And there is no doubt whatsoever that they did precisely that. The exhibition is on show in the Grand Palais in Paris, France, until March 16, 2007.