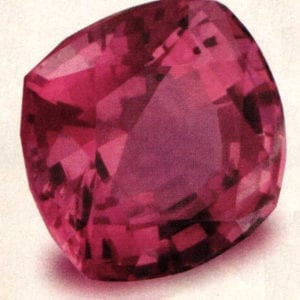 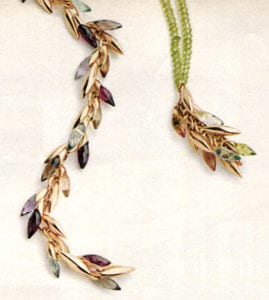 Italian manufacturers are importing more colored gemstones than ever.

The bulk of the E.U. gem market is in ruby, emerald, and sapphire. The region’s biggest importer of those gems is France, which brought in €94.8 million ($125.1 million) in ruby, emerald, and sapphire in 2006, followed by Italy at €60.5 million ($79.9 million). While both of those counties are consumers to some extent, most of their gemstones end up leaving the country. 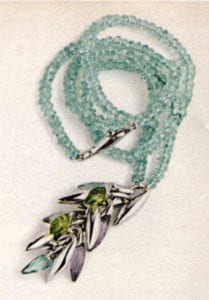 Take France, for example, which exported almost as much ruby, emerald, and sapphire as it brought in — €89.5 million ($118 million) in 2006. French gem dealers tend to specialize in high-end gems. The bulk of France’s gem imports are, in turn, sold — still unset-to gem dealers in Switzerland, an exclusive network which deals with jewelers and collection around the world.

Most of Italy’s gemstone imports, on the other hand, end up mounted in jewelry, and Italy’s jewelry exports have been growing steadily, reaching €4.1 billion ($5.5 billion) in 2006. Even more of that jewelry may feature colored stones in the next year or two, because in 2006 Italy’s gemstone imports were through the roof: Ruby, emerald, and sapphire imports were up 58.7 percent over 2005, and “other” gem imports increased 28.8 percent. 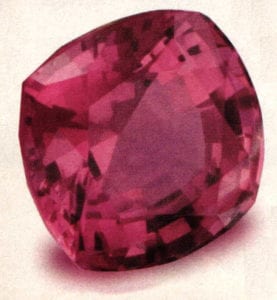 French gem dealers are known for their rare, high-quality gems, such as this 6.9-ct. pink spinel from Daniel Daniel H. Piat.

While “other” gems account for less of the gem trade in Europe, the category is on a strong growth tend: “Other” gem imports into the European Union increased by 21 percent in 2006, compared to only 3.3 percent for ruby, emerald, and sapphire.

Italy and Germany accounted for most of the growth in the “other” gems category; Italy imported the most at €37.9 million ($50 million), with Germany number two at €28.8 million ($38 million). Germany, like France, is mostly a trading center — the majority of Germany’s gemstones are exported to the United States, although German dealers also sell to Hong Kong, Thailand, Japan, and other countries around the world. 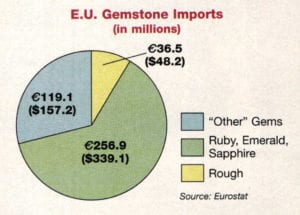 Since most of the European Union’s gemstone imports are ultimately destined for somewhere else, the dramatic increase in the “other” category suggests a worldwide growth in demand for nontraditional colored gemstone jewelry.

The European Union as a whole has been able to capitalize on the strength of the euro versus the U.S. dollar to shift more gemstone buying and selling to its home ground. The European Union is the world’s second-largest gem market after the United States, importing more gemstones by value than India and Thailand combined. It’s now up to the United States to retake the initiative by building the value of its currency, or lose it by doing nothing. 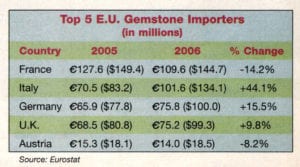