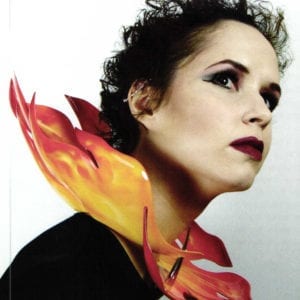 Flamboyant colors and forms ranging from the simple to the expansive characterize the sculptural jewelry of the American metalsmith and jewelry artist Dan Jocz. Any attempt to categorize this unusual designer is swiftly doomed to failure, because Dan Jocz adheres to just one rule: that of his own, innovative ideas. 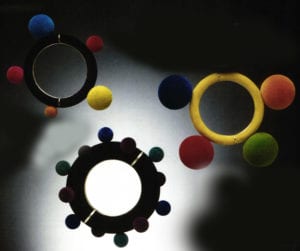 Great to bite into: colorful bracelets in flocked aluminum from the ‘Candy Wear’ series 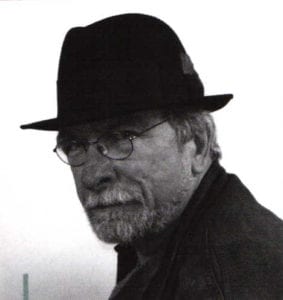 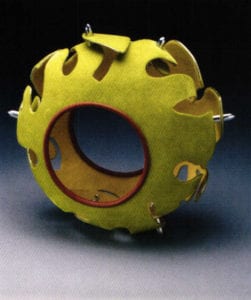 In the late 1970s Dan Jocz, a sculptor by qualification, reached a fundamental decision: he decided to turn his back on sculpture and dedicate his energies to the creation of jewelry. This was a consideration that he had been toying with for some time, and which he chose to pursue when the decisive moment of realization dawned: “I realized I could work my sculptural ideas through jewelry and I like ‘working small’”, declared the 64 year-old. He responds to the question of whether it took courage to wear his often boldly-colored, expansive and exuberant jewelry with an intuitive affirmative. Some people consider his jewelry to be highly wearable, others as more of a statement, explains Dan Jocz. “In the beginning of my jewelry career, I made a conscious decision: I wanted to follow my artistic ideas. And so my jewelry sometimes sways from wearability to exploring experiments. I always want to pursue all things and ideas that enter my mind and then I get to a point where I have to ground myself again,” he says, on reflection. “I tend to stuff big ideas into small packages, and then the jewelry almost seems as if it is bursting out. Many people think my pieces are much bigger than they really are, when they see a picture of them”. 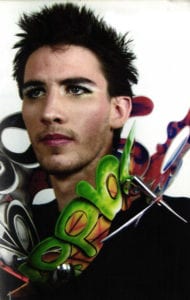 Anything but decent: ‘Pop Rock’ collar 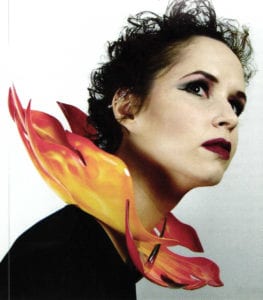 ‘Fire Water’ is the name of this collar created in 2007 which, despite its large volume, is very light. Formed aluminum 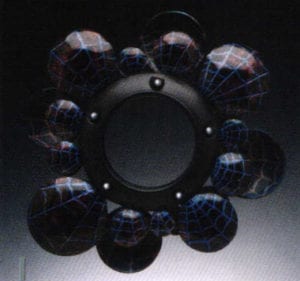 Mr. Jocz’s personal favorite because “it pushes the farthest from studio-jewelry-expectations”: the ‘Spider’ bracelet from the ‘Aluminum 3ways’ series is formed from anodized aluminum 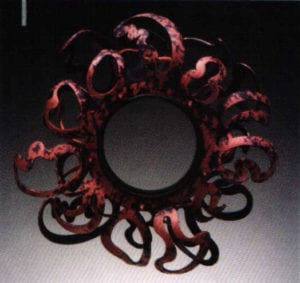 The ‘Dance’ bracelet is part of the ‘3 Ways’ collection which explores different ways of working with aluminum: forming, carving and bending

In the course of an almost 30-year career in jewelry design Jocz has experimented with many different forms, colors and materials. Classical work with precious metals and gemstones is represented alongside collections with modern materials. Simple geometric figures such as those in the ‘Candy Wear’ collection are produced in tandem with the intricate bracelets in flocked or anodized aluminum. One constant is the prominent use of color and design. Working with aluminum allows him to design more voluminous bracelets, deceptively light in spite of – or even because of – their size. “When I started to work with aluminum about 5 years ago, I didn’t know much about it. But I experimented with it and it took me to a new direction”. At the same time, Dan Jocz began to incorporate other artists in the production of his jewelry, for example an enameling artist. This interaction with others is gaining in significance, representing an enrichment for Dan Jocz. “One thing became clear for some of us: there was a change in the air – craft objects, all the ‘loaded stuff’ had run its course. We started to see that we were no longer single artists and craftsmen but design entered the studios again!” The jewelry has become lighter, not just in weight, but in the statement that it makes. Jocz goes on to explore fashion jewelry, which he compares with the experience of buying candy as a little child: “You buy the sweets and put them in your mouth and it hits you! Five minutes later it is gone, but it was fun and you want to do it again. This is how I define the kind of jewelry fashion I am interested in. There is no depth to it in terms of an important meaning that this piece of jewelry has. The idea is that this thing hits you somewhere between wonderful and stunning and then it disappears. For me this is arguably as valid an experience of artist studio jewelry as any,” states Jocz. His Candy Wear collection embodies this with catchy forms and scintillating colors. His ongoing desire to broaden his art resources led him to explore a pop culture connect on which brought him to the motorcycle painting. His fascination artistic work on motorcycles and his with aluminum led to his opulent with their humorous nod to the ruff of the 16th century. Lacquer is the aluminum layer for layer, the effect is one of a material that has lost own tactile properties – the wearer of observer confusing the unusually smooth polished surfaces for plastic. On the other hand, with this procedure Dan Jocz eliminates traces of hand craftsmanship. “I have intrigued by the measurement of the in jewelry through the mark of the artist’s hand on the material in a finished work. While handwork remains as the basis of my work, it is eliminated as an aesthetic quality in the final product,” says Dan Jocz. The irony that he illustrates is that it takes exacting hand craftsmanship to remove the traces of the very same. Following the presentation of the collars to a European audience at the Galerie Marzee this year, American audiences will have the opportunity to view them for the first time at the SOFA in New York in cooperation with the Ornamentum Gallery (Hudson, New York). And what plans are there for 2008? “I just need to sit back and think about work”. Typical Jocz.

All articles by this author
Previous Siamo Qui: We Are Here
Next Felix Lindner: Play with Ciphers
Social media