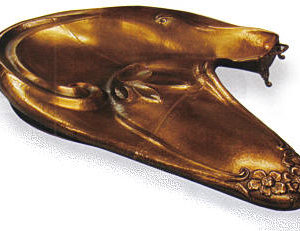 The Holloware of Myra Mimlitsch-Gray

Myra Mimlitsch-Gray occupies a well-recognized position in the field of metalwork. She produces both jewelry and holloware, the latter being the subject of this essay. As an artist she brings to the workbench a keen sense of history and the social contexts of metalwork, particularly such precious metals as silver and gold. Mimlitsch-Gray belongs to the breed of contemporary artist that revels in the blur zone existing between craft, art, and design.

She acknowledges function in her work, but few pieces could be said to be functional. She honors the long and distinguished history of metalwork, while at the same time looking at tradition with a jaundiced eye. Her work refuses to live comfortably in any single category. It manifests the physicality of craft, the inventiveness of design, and the intellectual and visual content of art. Mimlitsch-Gray creates a vibrating atmosphere that surrounds her work, and engages the viewer on several levels at once.

Mimlitsch-Gray delivers her visual punches by surprising, or even shocking, the viewer through scale alone. Her Chafing Dish of 2002, which incorporates a found object (another example of the artist’s blatant rejection of preciousness), simultaneously intrigues and repels the viewer, drawing us into a familiar world of tabletop utensils that have morphed into a massive (9 x 45 x 33″) creature that dominates its platform. The unctuous spreading forms evoke a flow of glowing lava caught in mid-ooze. It is a work that could be described as Gorham tableware on steroids. At the same time, the piece also references the sensuous organic forms of metalwork by the art nouveau exponent Hector Guimard, whose muscular flexing door surrounds graced many Paris Metro stations at the turn of the twentieth century. Guimard was able to reconcile the elegant and beautiful aspects of natural forms – stems, vines, and branches – with a slightly sinister undertone that suggests that his pieces, like Kudzu vine, might continue to grow and strangle anyone who approaches.

At a further remove, Mimlitsch-Gray’s extruded chafing dish also evokes the knorpelwek or auricular style in seventeenth-century Dutch silver produced by Adam and Paulus van Vianen of Utrecht. The style was so named because the writhing and rippling ornaments are held to resemble the complex folds and three-dimensional curves of the human ear. The grotesque hybrids of plants and animals comprising the ornamental vocabulary of the van Vianen family makes their ewers, basins, and trays look as if they are having a meltdown. Mimlitsch-Gray maintains this same tension while constantly reminding us that domestic metal holloware is harmless and friendly. She does not stop by taking these core samples of history; in a final ironic gesture she preserves the remnants of a bastardized Victorian chafing dish whose delicate neoclassical pierced gallery and foliate legs and handle are being consumed by the resplendent metal sludge. In these works, the artist may be suggesting that chaos triumphs over order, that time can be compressed or elongated like a time-lapse film played at fast forward, and that our factual memories can subtly and almost unnoticeably transform into surrealistic dreams – sometimes visions and sometimes nightmares.

The changes in scale used to dramatize traditional forms in Mimlitsch-Gray’s work are not always achieved by increasing the object’s physical size alone. In the mid-1990s the artist carried out a series of serving trays, most of hammered copper, on which the primary ornamentation consists of outsized hammermarks. Historically, works raised in silver revealed the hammer blows of the craftsman midway in the process of production; these rough thumbprints of the smith’s hammer that indicated that the piece was not yet finished were eradicated by further work with a planishing hammer that transformed the pock-marks into sleek, smooth, even mirror-like surfaces.

In an interview with Mimlitsch-Gray at the time of her 2004 exhibition at Gallery 81 in New Haven, the artist provided insight into the intellectual processes that lie behind her works. She explained, “the ‘Hammermark’ series was a kind of magnification technique, based on romantic propaganda that exposes the flaws of handwork as a mark of its handcrafted significance.”

Mimlitsch-Gray has deftly exposed the soft underbelly of the Arts and Crafts Movement of the late nineteenth and early twentieth century. In Arts and Crafts practice, an object was made to look imperfect in order to proclaim its honesty and worthiness as something handmade. It was this “mark of the hand” that distinguishes these works from what was perceived as the emotionless and inhuman perfection of industrial products. Standards of craftsmanship continued to be valued during this period, but so, too, were the friendly flaws, irregularities, and accidents of the handmade. This led to a curious redefinition of quality. The curmudgeonly John Ruskin, whose ardent belief in the need for workmen in the crafts to regain their humanity, went so far as to claim “…so long as men work as men, putting their heart into what they do, it matters not how bad workmen they may be.” [1] This attitude would have been inconceivable to craftsmen in the workshops of Benvenuto Cellini during the Renaissance, or of Paul de Lamerie, who worked for the British aristocracy in the first part of the eighteenth century.

The inherent naivete of attitudes like Ruskin’s caused the American author Willa Cather to comment that it was “the irregular and intimate quality of things made entirely by the human hand that endeared objects of daily life for her.[2] More recently, artist and author David Pye noted, “The two oddest propositions I have met are: (a) that workmanship is bad unless it is perfect. (b) that workmanship is bad unless it is imperfect. Sooner or later I hope to find them being defended both at once.”[3] Something seems to have gone horribly wrong, and MimlitschGray has never missed an opportunity to exploit this aesthetic quandary.

A direct link between the artist’s concern with perfection and the Arts and Crafts movement can be detected in Mimlitsch-Gray’s Four Roses (1999). The scale of this presumably domestic object is intimidating. Its history as a form, however, derives from the standard household tray that sat comfortably on a sideboard as a resting place for a tea service. The bumpy center of the tray reflects the artist’s continued fascination with the mark of the hammer. The outer border, however, is a tongue-in-cheek caricature of the thousands of “homemade” copper trays and dishes produced in the studio/classrooms of metalworkers in both England and the United States. Rather than keeping to its basic role as a class project or souvenir, Mimlitsch-Gray’s tray is elephantine in size, maximizing the cunning crudity of period work.

Mimlitsch-Gray is also adept at playing a mind game with our ideas of function in the world of metalworking. This fascination with the tantalizing suggestion of function is rarely consummated in reality. Much earlier in the artist’s career, she was already suggesting that function itself functions as meaning. Her Heels (1989) is witty and provocative. Mimlitsch-Gray explores how function is a channel for commentary on women’s role as both victims and accomplices in the ways that beauty is defined, as evident in the painful motif of corkscrews that hold the heel to the wearer’s foot.

Other explorations of function and dysfunction can be seen in Mimlitsch-Gray’s Sugar Bowl and Creamer (1990). The artist considers her work both “representational and abstract. When you make a teapot today, it is both object and subject; it becomes a representation of what a teapot can be within its total cultural context.” Here the sugar bowl and creamer are only memories defined by the empty space they once inhabited. Mimlitsch-Gray says “from the very beginning, I responded to the idea of imaging the object, of the ghost being in there.” She is intrigued by the poetic concept: “the shell is there, the image is there, but where is the thing?”

Over the past few years the artist has continued to conceive objects that have stopped halfway in their melting process, or which are midway on their way to being formed. “I called these works ‘conflations,’ a bringing together of melancholy and buoyancy. They’re floating, and they’re sinking. While there is an undeniable sense of loss in these works, I was trying to reclaim a little by making them lighter, cloud-like, motifs. They’re meant to be like plaques or trophies. I actually thought about hanging them on the wall,” an idea the artist is pursuing in her latest work, Mantle.

In addition to being one of the “smart” artists working in the decorative arts today, Mimlitsch-Gray is also aware of the need for continual evolution and change in her work. While regarding herself as a technically sophisticated craftsman, she also readily admits that, for her, perfection “has no fixed definition” and is something that eludes each work and drives her forward. “Every time I start a new direction in my work, I have to begin all over again and retrain myself entirely,” she concedes. Myra Mimlitsch-Gray continues to evolve, creating exaggerated works that defy category and, in her words, “acknowledge the heroism of craft while being critical of it at the same time.”