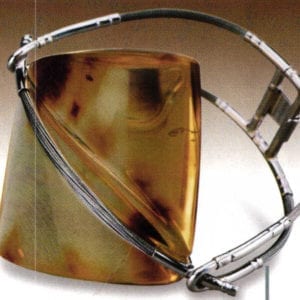 Design is becoming more important in Poland. Jewelry isn’t yet playing a starring role, but it is also one of the ways to highlight one’s own individuality. Poles’ attitude to jewelry can be explained both by the economic situation in the country and by the continuing lack of self-confidence to wear larger, more noticeable pieces of jewelry. 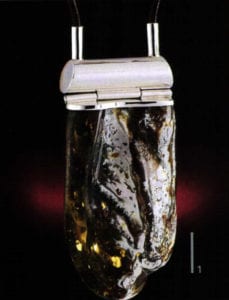 Due to its low price, sterling silver is the most popular metal for jewelry, including designer jewelry. Silver is quite often gilded to give the model a completely different effect. Next most popular are steel, gold, and finally brass. Platinum is rarely used. The same applies to stones: Genuine stones are often used, but they are quite small. Synthetic zirconium is a favorite. Some potential exists for expensive designer jewelry, but there is not yet an extensive interest in it. 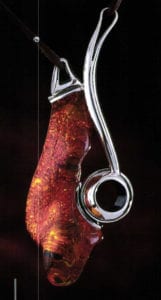 Pendant by Elzbieta and Marek Pawlowscy

Amber is in a class by itself as a Polish specialty. It is also mandatory in the designer sector. Most designers include at least one amber piece in their work. Many begin with it because the material is easier to process. We have jewelry designers to thank for the discovery that amber can also come in beautiful modern shapes. It is usually combined with silver and most recently with yellow gold. Great care is always taken to combine large pieces with the minimum amount of metal in order to highlight the unusual features of the stone. 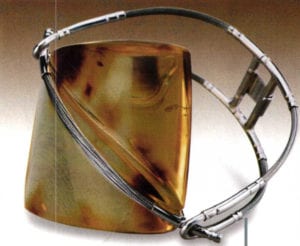 To make amber popular and even loved, the “Elektronos” jewelry competition by the Amberif Jewelry and Gems Fair will increasingly include international participation. This year, participants were challenged to combine the “gold of the north” with gold, both physically and metaphysically. The result was to be a third value: art more valuable than gold. The international jury whose members include Philip Sajet and Matti Matson, awarded three main prizes and several awards. The first prize went to Beate Klockmann of Germany. Most of the competitors succeeded in discovering and presenting the third value. Some of the works reflect the events of September 11, while others are expressing the authors attitude of life, such as a small gold crown on an amber cushion with the caption “Bad time for democracy” (Slawomir Fijalkowski). 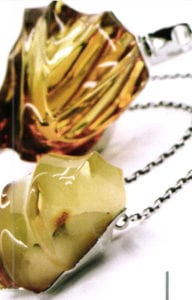 Frame with illustration of the World Trade Center, by Marta Schoeneck (distinction)

The fair in Gdansk holds a competition for which the decision is made during the fair. The Mercurius Gedanensis is only for Polish producers and designers, but this year there were few good-quality or interesting projects. 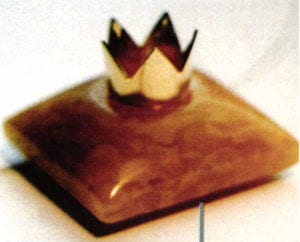 The Zloto Srebro Czas fair in Warsaw has not yet succeeded in sufficiently publicizing its “Prezentacje” contest in conjunction with the Goldsmithing Artists’ Association. But in the meantime, it will obviously soon be important to Polish designers and art students. The objective is to bring a bit more movement into the designer environment and particularly to provide an opportunity to promote artistic and unusual projects. Such opportunities are most welcome, particularly since the situation on the market for designer jewelry still leaves a lot to be desired. All jewelry works in which goldsmithing techniques are used are eligible. 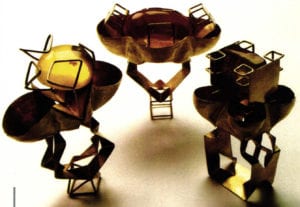 Perhaps the most important artistic event in the design world is Ogolnopolski Przeglad Form Zlotniczych “Srebro,” which has been held by the Art Gallery in Legnica since the late 1970s. At that time it was a rather spontaneous occasion, but today the competition is more organized. It is held every two years and is the event for major Polish jewelry designers, gallery owners, and fans of silver jewelry. The main topic is, as the name suggests, silver (srebro), often combined with other more-or-less avant garde materials such as glass, Plexiglas, paper, and the like. The event has made Legnica into the capital of Polish goldsmithery. It attracts local designers and – more recently – foreign designers who are interested in and enjoy the challenge of modern, avant garde opportunities as part of a broad-based jewelry exhibit that sooner or later will shape the general trend. 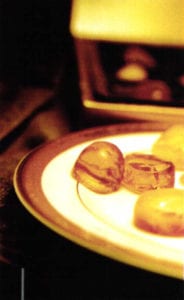 It is not just in Legnica that the Polish jewelry-making scene is discussing wide-ranging new development trends. Therefore, seminars were prepared and discussions held on the topics of modern art, fashion, and design. 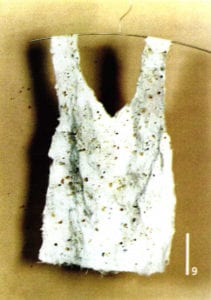 The last two years have brought success to Polish jewelry designers in international jewelry competitions. Six Polish representatives were included on the finalist list of the 2001 “European Facet Award – International Jewelry Design Competition.” What’s more, the silver chain and bracelet with zirconium by Paulina Jagustyn won first place in the stone category while two silver rings with zirconium by Jaroslaw Westermark came in third in the same category. This year we were thrilled by the success of Ewa Rudowska, who was among the 34 finalists in the Gold Virtuosi International jewelry Competition for a gold set including a chain, ring, and earrings in the shape of leaves. 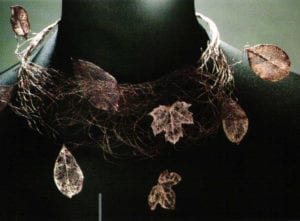 Pendant made of silver wire and leaves

Those successes have a good effect on other designers, who are developing more confidence in their own abilities and feel that they have been challenged to participate in international competitions. On the other hand, it is up to organizers to interest Polish designers in submitting their works. For example, the first Polish edition of the International Tahitian Pearl Trophy was held in 2002. In the meantime, many Polish jewelry designers have become known in other countries. Many of them sell their work either directly in galleries or through agents. 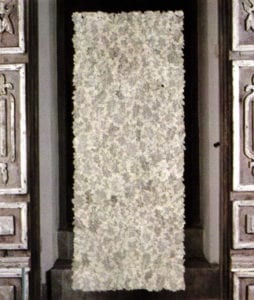 Fabric made of leaves

A series of good-quality galleries have become established recently that exhibit the works of one or more designers (including those from other countries), sponsor contests (some gallery owners even award their own prize every year), or promote young artists in one way or another. 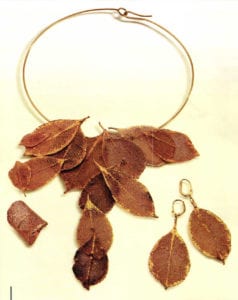 Very few schools teach jewelry design. Increasing numbers of young people want to study the subject, including some who have already been successful but do not have proper art school training. The most important, best-known art school is the Lodz Academy of Art, with about 20 graduates every year. Works by its students could be seen at the Midora fairs in Leipzig, where several of them have participated in the Midora Design Award for jewelry as well as at lnhorgenta in Munich, where the school has its own stand. 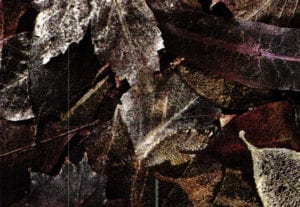 The College of Art and Design in Lodz, where subjects include interior design, product design, and photography, is also making a reputation for itself. Jewelry design is a small section within Product Design. A workshop was held at the College of Art and Design for the first time this year, at which students from art schools in Poland, the Czech republic, and the United States participated. 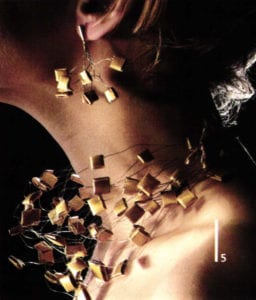 Necklace and earrings made of straw

Marketing is a genuine problem in Poland. The weak economic situation makes life difficult both for gallery owners and for the designers, who are forced to move further in the direction of commerce and to work in inexpensive materials, often to the disadvantage of the design. That is also the reason why Polish jewelry designers participate less frequently in international jewelry competitions and have a tougher time than their fellow contestants. On the other hand, they are more dedicated to seeking opportunities and often have to work more to achieve as much as their colleagues from Western Europe or the United States. Cooperation with major jewelry producers is still in its early stages. 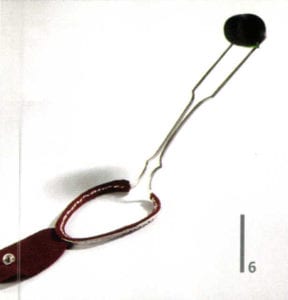 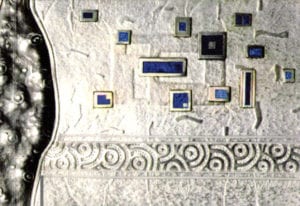 Brooch made of silver and enamel, by Tadas Deksnys, Lithuania (second place) 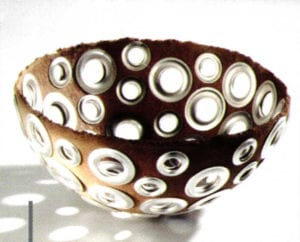 Container made of flour, water, and silver, by Andrzej Boss (third place)