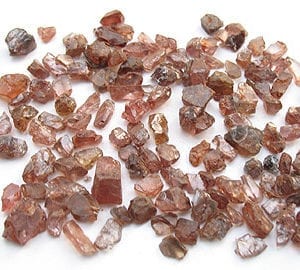 I start this report with a little bathroom humor–of the gemological kind. While digging a pit latrine in early January, a ranch hand in the Taita-Taveta area of Kenya came across some unusual looking stones just a few feet below the surface. Those curiosities turned out to be color-change garnet.

What followed is the classic tale of mining rushes. Hundreds of small-scale miners descended upon the area from nearby mines and started producing material – the very best of which rivals the finest from Madagascar – changing from a teal (blue-green) in fluorescent light to pinkish-purplish-red in incandescent light.

This isn’t the first such gem stampede. The Taita-Taveta mining area is known for the vast majority of tsavorite production in East Africa and also produces other gems including ruby, golden and chrome tourmaline, red garnet, apatite, etc.

Call in the Cops

The rushing miners proceeded to mine haphazardly on this private land, and even dug up a section of an adjacent road under which some fine stones were reportedly found. The landowner then brought in security forces to bring some control to the area, and the small-scale miners moved to an adjoining piece of land, where they are currently mining. Nearby claim-holders are also actively mining this material now. As anyone familiar with East African geology knows — when you strike a gem in a particular area there is a great likelihood of finding similar material in the surrounding area, albeit a very hit and miss process, given the tortured geology of the region.

The lack of water in the area (even worse with the current drought in East Africa) makes mining a very dusty and tedious process here. The miners are unable to wash the gravels and better separate heavy materials from which gems can be extracted.

What have we here?

There is a very wide range of colors being produced in this new mining areawith the bulk being light brownish stones with little change to a smattering (no more than 5%) of fine material with 100% color change. What’s more, colors in both states are superb.

The news isn’t all good. The vast majority of stones are very heavily included and unsuitable for fashioning into faceted gems, making it difficult to obtain clean stones with good change.

The Dangers of Wishful Thinking

Due to the fantastic color-change in the best material, many brokers mistakenly thought the material to be Alexandrite and sold it for very high prices to over-eager buyers. While fine alexandrite fetches thousands of dollars per carat, color change garnet can usually be purchased for a fraction of that.

However, a little gemology could have prevented some confusion. The field test between alexandrite and color-change garnet is very simple. Garnet is singly refractive, which can be assessed with a simple dichroscope, while alexandrite is trichroic, showing three colors in the dichroscope.

Buyers have now arrived from all over the world, driving up prices for the very best material. Sizes that can be cut from the better color material are primarily below one carat, with material above two carats rare, and above three carats extremely rare. Since this is an alluvial deposit mining can only be expected to last for a relatively short period of time. It is unknown if the primary deposit still exists and even if it is discovered mining that is likely to be far more difficult and expensive than this current strike.

Ganoksin is sponsored by
By Raja Shah, Color First, Tampa, FL – © Colored Stone – May 2009
In association with