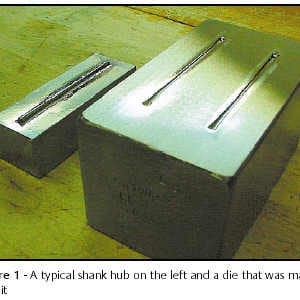 Cold forging in the karat gold jewelry industry has sometimes been referred to as stamping, coining and die striking. This process has been used throughout history in the making of coins and medals as well as jewelry. Cold forging basics will always be the same as they were during antiquity; however, the fine points are constantly being refined.

The process is simply described as forming a finding by using extreme force to drive raw material into a shaped cavity in a steel block. While it may sound simple, there are many subtle conditions that will effect the outcome. Findings such as shanks, tops, charms and trims are ideal products for this method of manufacture.

Pressing a steel master or hub (also known as hob) into a soft block of steel makes tools for cold forging. Up until the 1980’s, hubs were cut by hand using hammer and chisels, gravers and files. They were the height of toolmaking craftsmanship and art; however, the skilled artisans needed to produce these masterpieces became hard to find. Today, a hub can be machined with conventional toolroom equipment or fabricated with CAD/CAM technology. They still require a high level of hand skills to finish and polish. The master is made from A2 tool steel which is very tough and will withstand the pressure of the die making.

After creation, the master is then heat-treated at 1750°F (955°C) for one hour and then air-cooled. This process will yield a Rockwell C hardness reading of 63. It is then tempered to 59 Rockwell C by placing in a furnace at a temperature of 450°F (230°C) for one hour. The master is pressed into a steel block with the aid of a hydraulic press and then the die is heat-treated at 1525°F (830°C) to a Rockwell C hardness of 60. The die is tempered for two hours at 440°F (227°C) to 57 Rockwell C and then the cavity is hand polished to aid extraction and impart a superior finish to the finding. The steel used in the die itself is of the L6 class of tool steel, having high impact and shock resistance.

Two hard and fast rules that apply to this type of tooling are that there can be no undercuts and that a draft angle must be applied to all cavities. Unlike castings, undercuts are impractical with diestruck products. They will cause the metal to lock into the cavity and become impossible to extract. Draft angles of two to five degrees are necessary for easy removal of the part from the die and often aid in reducing the time it takes to run each job.

The stages in the tool-making process are illustrated in Figures 1-7. 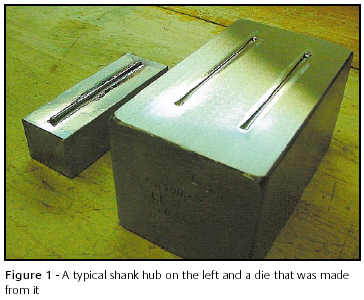 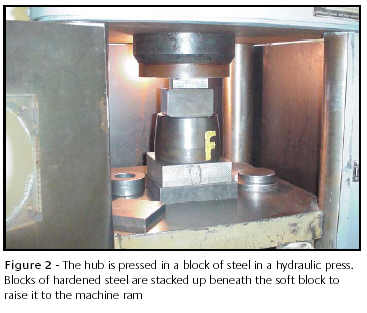 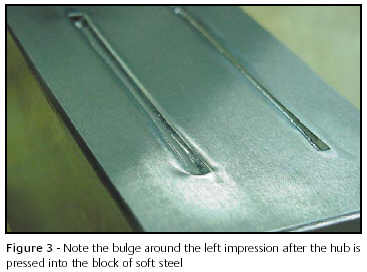 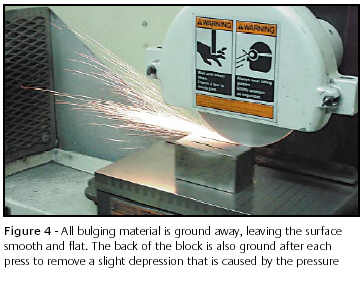 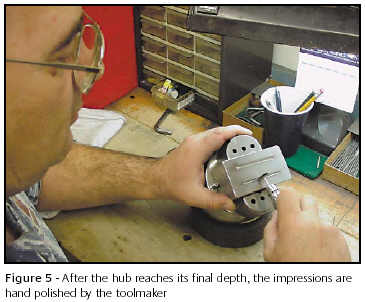 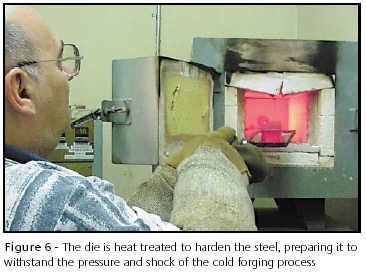 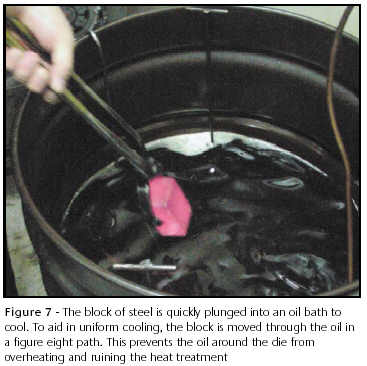 To illustrate the cold forging process, a typical shank job will be used. This shank is of the type commonly used for solitaire rings. The material must be fabricated into a shape that is close in size to the final product. There are several ways of doing this. The most common method is to chop thin strips from a sheet of material or blank out shapes that resembles the outline of the die. Blanking can cause problems if there are sharp notches in a blank. This can cause a crack in the finding itself.

A good example of this is using a charms final trim tool as a blanker. The area where the loop for the jump ring joins the body of the charm has a corner that will be prone to cracking when it’s stamped. In this case, using the trimmer for a blanker will result in the job being scrapped. Rounding out notches on the blanker will reduce this or prevent it from happening. This problem is magnified when stamping nickel white gold. For the shank used in this article, 14- karat gold square wire was used, Figure 8, because it is quick to fabricate and it has a good shape for stamping. 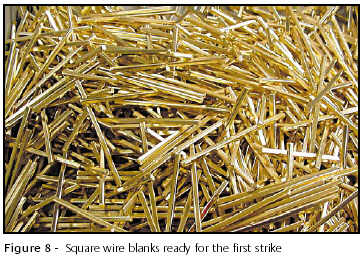 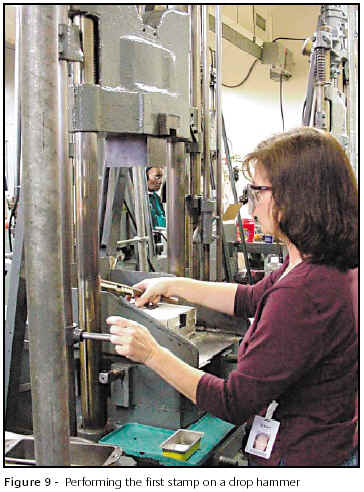 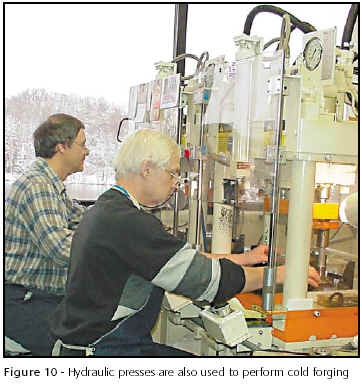 The die is bolted into a pneumatic drop hammer, Figure 9, or a hydraulic press, Figure 10. The drop hammer works on the principal of a weight being raised by air pressure in a cylinder. The air is evacuated from the cylinder and the weight falls forcing the blank into the impression. However, the force created in a hydraulic press is caused by oil being pressurized within a cylinder that slowly drives the metal into the die. The methods of generating the force are different and so are the results. The drop hammer provides a quick, sharp hit while the hydraulic system builds up pressure slowly. For the shank example, a drop hammer was used. 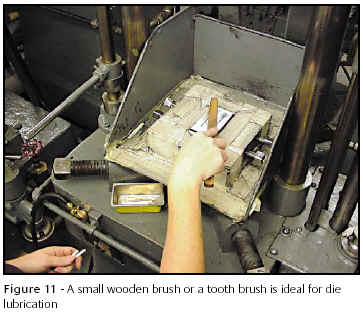 The die is lubricated with a light coat of mineral oil, Figure 11. Baby oil has been used since the early 1950’s and is ideal for the job. To judge the proper amount, the brush is rubbed across the fingernail and only dry oil sheen should be left. It shouldn’t be wet at all; however, there should be a light film left on the fingernail. Too much oil will settle into the cavity and clog the detail, preventing the part from fully forming. The first die used is called a start die and the draft angle is exaggerated to allow the metal to move into the cavity with less resistance. The blank is positioned over the impression and the material is then struck into the die. At this point, the finding will not be fully formed and additional steps will be needed to bring up the definition of the piece. The amount of pressure used with both systems can destroy the die, if excessive.

The whole operation, if done incorrectly can be compared with splitting wood. If the blank is hit too hard or is overworked, it can act as a wedge and will split the die in half. This is an extreme case of misuse. However, in lesser degrees, the impression will crack at the bottom or the walls will start to collapse. The development of the blank dimensions is also very important. Too much material will result in extra strikes and trims to bring the part to its final dimensions, while an under size blank will not fill in the impression.

Using a force or male half of the die can stamp hollow backed items with very thin sidewalls. Also joining two die halves with impressions will permit both sides of a finding to be detailed. This however can present challenges for trimming tool geometry since the impression will need to be cut into the face of the trimmer punch to prevent flattening. Overflow or excess material is formed around the part, Figure 12. Thickness of the overflow will often range from 0.015” to 0.018” (0.38 – 0.46 mm). This must be reduced in order for the material to flow freely again and a trimming tool is used to do this. For a shank like the example, a rectangular shaped tool works very well. This universal trimmer can be used for up to 80% of the solitaire shanks offered by a company if designed properly, Figures 13 and 14. 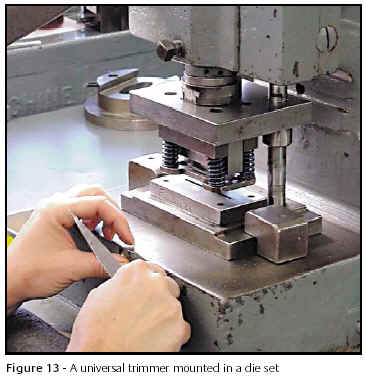 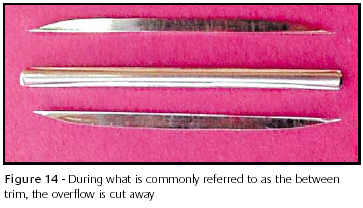 Each time the metal is pressed into the die, the material is work hardened. For further forming, the material must be annealed. Holding the workpiece at a constant temperature for a set period of time and then uniformly cooling it does this. In many factories, an atmosphere is maintained by using cracked anhydrous ammonia or a nitrogen/hydrogen blend. These gases provide an atmosphere that protects the metal from oxidation while it’s being softened for additional operations. The sample shank was annealed at 1400°F (760°C) for 20 minutes. Figures 15 and 16 illustrate the cold worked and annealed grain structures respectively. 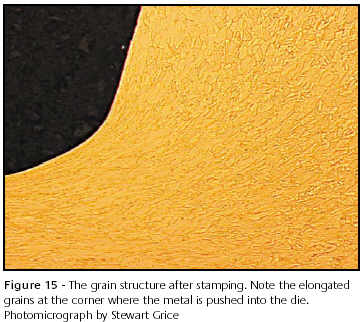 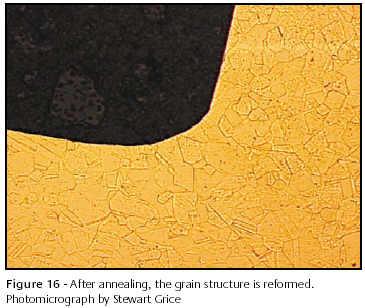 The shank is next stamped in a final die that has the finished geometry in the impression. Some jobs call for a third strike to bring up the final shape. In the example, only two dies were used to do this. The overflow will measure about 0.010” (0.25mm) at this point since this thickness will yield an acceptable trim line.

After stamping, the overflow needs removal with a trimmer that is specific to the style being forged, Figures 17 and 18. Proper maintenance of the final trimmer is critical to the appearance of the finding. If the plate is over sharpened, the opening will increase, causing a step at the trimmed area. Also, a trimmer plate that’s too tight will trim too high on the part and cause a flat sidewall that detracts from the design. 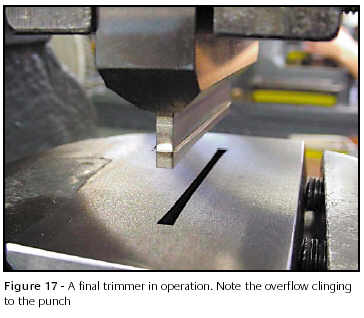 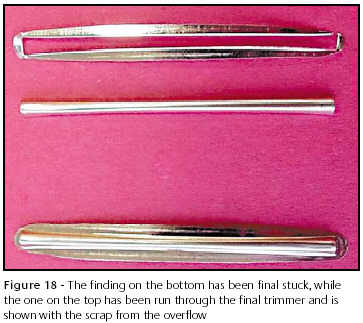 Prior to rounding the shank, the ends need to be prepared for mounting a setting. This involves shaping it for either four or six prong settings, Figures 19 and 20. There are three methods of doing this operation. Simple chopping with a punch and plate is fast, however the quality of the cut is inferior to the other two machining methods. Milling each end in a horizontal milling machine is the best method. The shank is held in a clamp and a milling cutter is run across the end making an accurate, clean cut, Figures 21 and 22.

The third method involves bending the ends into a hook shape, clamping and milling. While it is similar to the second method, it has the advantage of eliminating the problem of the tip collapsing while bending. However, the accuracy of the end bend is critical to repeated success. With both machining methods, the angle that the shank is presented to the cutter is important for a good fit. It needs to be set so that there are no gaps at the top or bottom of the setting/shank joint. 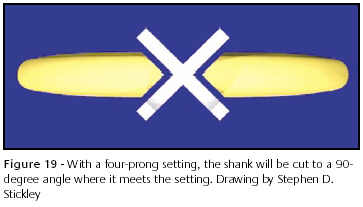 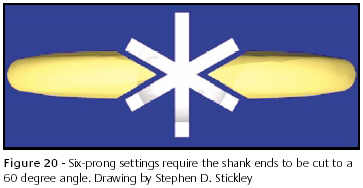 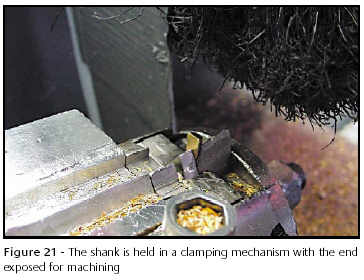 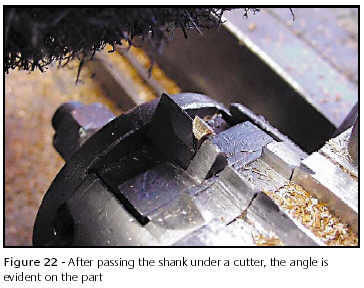 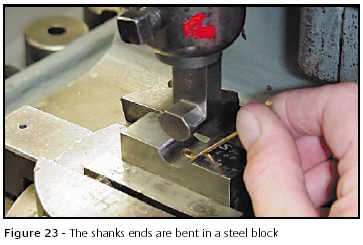 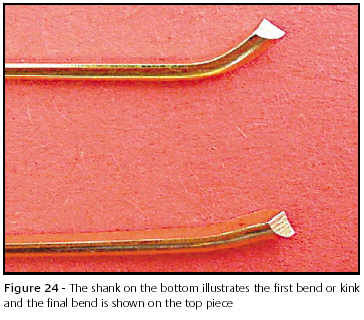 Rounding is done with a series of bending steps and protecting the ends of the shank is very important. The operation is frequently performed with two end bending blocks, Figures 23 and 24. The first one sometimes has a plastic insert imbedded into the steel in the area where the block would mark the gold. The bend in the first block is little more than a kink in the piece made from a light hit.

Where the block touches the shank is the area of most pressure and marks will develop if pressed too hard. The second blocks impression has the final bent shape and is made entirely from steel. The kink from the first block distributes the bending pressure along a larger surface area, preventing gouging. After the ends are bent the rings are fully rounded, Figure 25. Subsequent finishing to a final product is illustrated in Figures 26 and 27. Concluding remarks

The lack of porosity, as created in casting, and the superior surface finish transferred by the tooling have made stamping gold in dies a premium method of manufacture. The use of cold forging can be applied to many types of findings in all colors and karats. With proper annealing and care to avoid overworking, even the most stubborn nickel white gold alloys can be successfully cold forged. 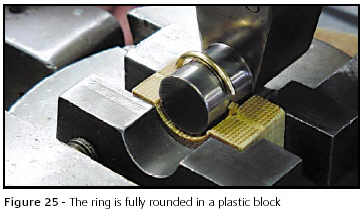 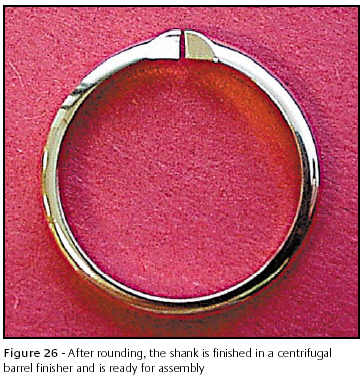 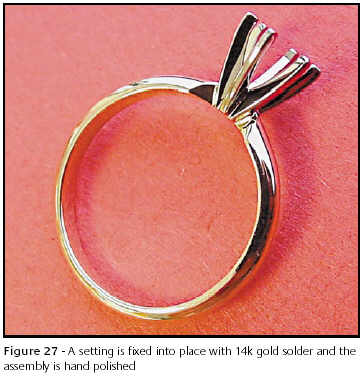 What type of grinding wheels can I use on my flexible shift to grind agate?

A bench with a view