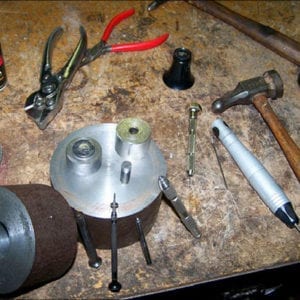 The Rush Job From Hell

In the jewelry business we all get rush jobs but I think this one may just get the prize for being the most work in 48 hours anyone has ever tried to get done. This nice young executive from the Trek Bicycle Corporation called us in a panic and said we were his last hope.

He needed 11 pure platinum, 21 pure gold, 36 pure silver and 101 bronze map pins plus 2 pure platinum tie tacks for presentation purposes. In all it totaled 171 finished pieces by noon on Thursday. It was noon on Tuesday before he made it to the shop so we had 48 hours to do the job. We told him it was not gonna be cheap but we would be fair. His boss, the president of Trek, had already told him that the mission was impossible. We were pretty sure we could do it IF we could get all the materials so we took on “Mission Impossible”! Here is how we did it.

There were three of us who had the skills to do the job, Glenn Prescott, Missy Howard and myself, Bill Howard. Engineering came 1st and we had to figure how could make a raised image of the Trek logo and attach a 1 1/4″ pin to the back so it would stick in a map without hiding the location. Casting was out because it would take too much time and finishing so we settled on die striking to create the image in relief which essentially produced a finished tack head.

We decided soldering the pins on would also take too much time and finish work so we devised a method of sinking the pin head (straight pin) in a recess on the back of the head and closing the hole over the head which also produced a finished product. The production time came to about 5 minutes per pin for striking, marking the center, cutting a pin hole and clinching the pin on. The silver and bronze had to be oxidized and satin finished so they could contrast with the platinum and gold pins which took a few minutes each. So far so good, right? We now had a system to make each piece in under 10 minutes or about 28 1/2 hours. We just had to make the system and make it work now.

The engineering was done so making the tools came next. Glenn got the die and engraving work, I got the centering and pin attachment and Missy got the blanking and finishing work. Division of labor is going smoothly. Wait a minute! We don’t have any bronze or pure platinum in stock so now EXPEDITING IS EVERYTHING.

A friend in Milwaukee had some bronze suitable for coining but we had to go all over the country to get pure platinum. For a while it looked like I might have to get on a plane to get the materials but finally a refiner in LA came through with the platinum and it arrived at the last minute on Thursday but we only had to make 11 in platinum so that could come last. The bronze showed up via FedEx Wednesday morning so we were back in business. By Wednesday morning we had the production system in place and working. No time to spare though as we had a few problems getting it all to work. Forget about sleep, we had little black bottles of extra strength energy drink recommended by the lady who worked double shifts at the convenience store, coffee and pizza. Who needs sleep we’re on Mission Impossible.\ 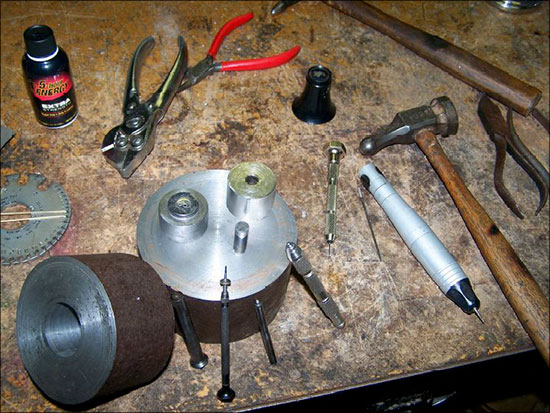 We made nine production tools in all. 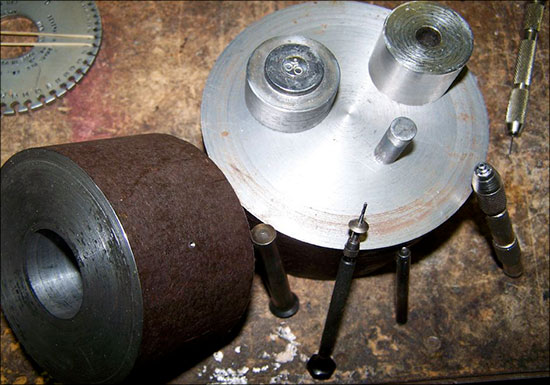 Naturally nothing worked just right on the first try but we got it all to work and even shaved some production time of the work as we went. We were getting lots of practice. Around midnight Wednesday Missy got to take a nap while Glenn and I finished striking the logos and attaching the pins. We drank the last of the nasty little black bottles about 3:30AM Thursday and finished our part of the job at 5:00AM so we could take a nap while Missy did the finish work. Hah! Fat chance for a nap, the guys were geek-ed up on the damned energy shots! 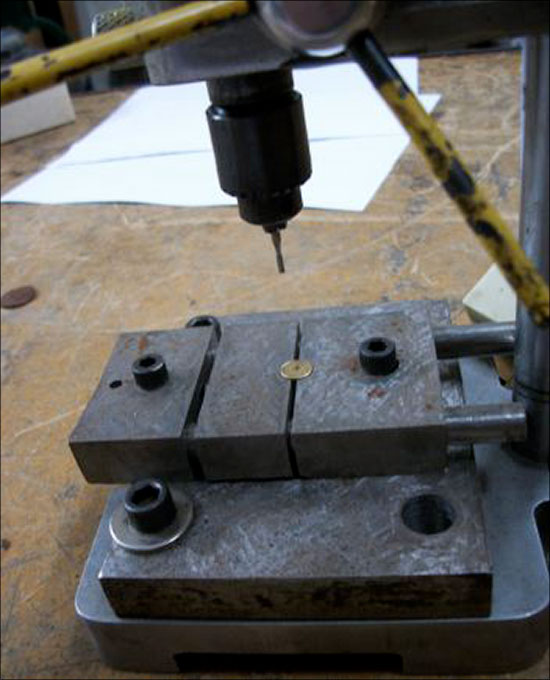 I suggested Glen and I take a few shots of whiskey to celebrate and take the edge off. Well we managed to get a bit tipsy while on our break but no real naps took place. The platinum finally came in and we made the last of the “Trek Bicycle Friendly Communities Pins” with 15 minutes to spare. Pat Hotlen-Young, the graphic designer from Trek showed up and was really, really happy to see it done. We figured we sent his stock up a few points with his boss and we got paid a fair, 5 figure price for our efforts. 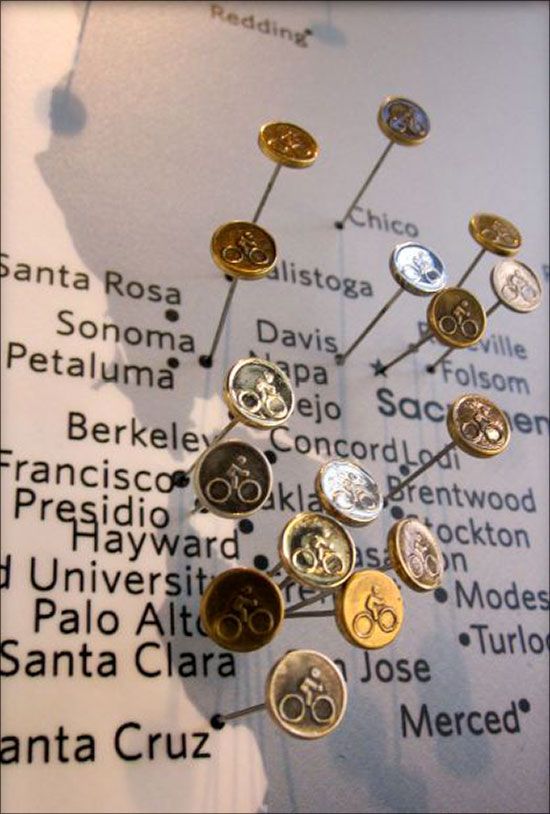 Attached are pictures of the tools we made and all the tools we used to do the job as well as the finished product and the map in Washington. A lathe and a drill press were the only extra tools required. Never underestimate what you can do with a little ingenuity and some simple tools.

By Bill Howard – © Howard Academy for the Metal Arts – 2011
All rights reserved internationally. Copyright © Bill Howard. Users have permission to download the information and share it as long as no money is made-no commercial use of this information is allowed without permission in writing from Bill Howard
Category:
About the author