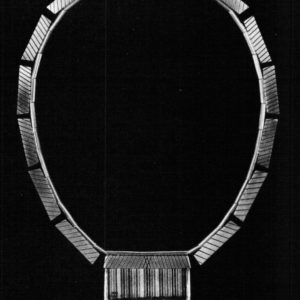 This article is a review on the New Works Exhibition by Belle and Roger Kuhn held at the Plum Gallery, Kensington, Maryland on April 8-28, 1984.

Belle and Roger Kuhn have worked as a team since 1969, Belle striving for expertise in enameling and Roger in metal. The Kuhns have traveled extensively to see, feel and experience visual stimulation. However, they seldom intellectualize their thoughts or feelings but freely react and comment about the things they see.

This past spring the Kuhns exhibited 40 new works, consisting of brooches, neckpieces, pendants, lapel and bar pins, which reflected their trip to Japan in 1983 and their interests in Indonesian, African and Western Pacific masks, textiles and statuary. The luminous, delicate color transparencies of the enamels and subtle shapes and surface treatment of the metal frameworks conveyed the impression of Japanese rice-paper sliding doors, windows, folding screens, “tori” gates, roofs—as evident in Neckpiece ’83—interior structures, architectural facades and subtle textures and colors of ethnic textiles. The unconscious experiences were transformed into colors and compositions in such delicate ways that one was struck by both their simplicity and their complexity. 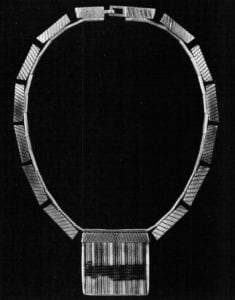 After several years of experimentation in different ways of doing cloisonné, Belle came to this new way, using four to five layers of transparent enamels over embossed fine silver foils. These embossed foils are stripes and linear grooves in fine relief, created by roller printing the foil with fine steel mesh screens. In order to create mainly one-directional linear lines, the weft grids are ground off by cutting discs on a flexible shaft. As a result, these warp grids allow vertical and horizontal color compositions. The color sequences are not static but constantly change in a play of light and dark values the intensities of opposite colors; transparencies, lusters and delineated spaces are influenced by reflections of light at various angles on the embossed relief. The occasional use of opaque colors on the border or framework allow the transparent colors to appear more luminous, tactile and dimensional. These linear abstractions are carried onto the metal framework by Roger. The shapes and surface treatments are carefully planned and echoed to enhance the enamels and are an additional but complementary local point to the overall work. 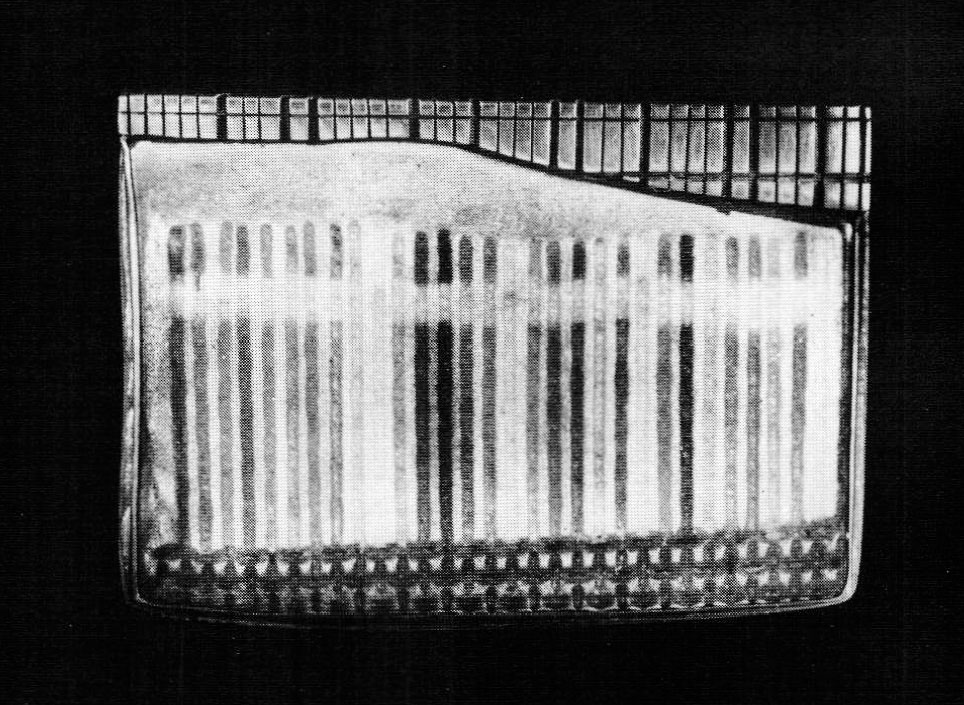 A cursory glance caught the consistency of expression in the collected works on exhibit, but a closer study revealed subtle changes in mood and elements of style. The metalwork in the first case clearly suggested elements of oriental architecture which enhanced and were enhanced in turn by the enamel color sequences. The second case in contrast had the feeling of integrating Eastern and Western influences, pieces reminiscent of the oriental architecture but modified by Western style of steel structures. The contrast of horizontal and vertical grid patterns and the juxtaposition of positive and negative forms created more dynamic content. The third case had pieces that evoked images of subtly rippling water, with color being dilineated over space. Others suggested the subtleties of strata definition in rock formations common to the Western landscape. The wall case was dominated by bar and lapel pins that gave the feeling of segments translated from woven tapestries strongly ethnic in character.

The total impression of the show was that of such a harmonious integration of metal and enamel that the collaboration did not seem labored. 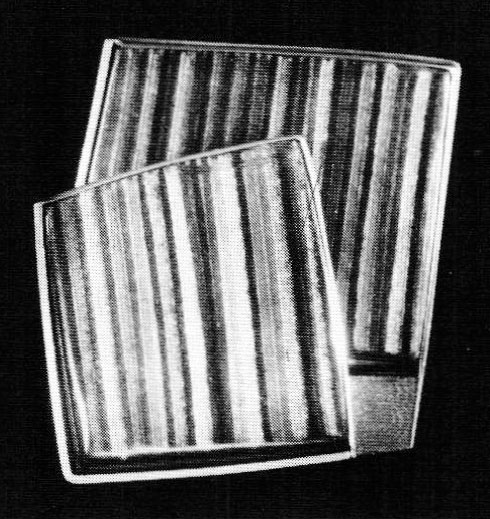 All articles by this author
Previous In Memory of Saraa Hopea-Untracht, 1925—1984
Next Randy Long: Works in Metal
Social media