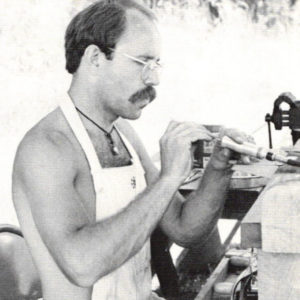 About 30 miles north of Buffalo, New York, less than 10 miles downstream from Niagara Falls, is a unique facility called Artpark. It is not so much a place as a program; in fact more than that, it is a concept. Artpark is a cultural resource designed to foster and present performing and visual arts as living enterprises. Here craftsmen, sculptors, storytellers, musicians, mimes and many other creative folks are employed during the summer for two- or three-week residencies to pursue their work, usually a specific project, before an interested public.

Artpark, which is 10 years old this year, is located in a state park and funded primarily by the Natural Heritage Trust, a New York State public benefit corporation. To the daily visitor some aspects will seem familiar. The cost is the same as any other state park ($2.50 per cad and the care of the area is entrusted to green-uniformed park rangers. But soon the similarity between this park and any other ends. The 200-acre Artpark site houses a 2300-seat theater and an elevated wooden structure called the ArtEl that provides a flexible workspace for the artists and performers who make the park work.

A typical day in the park will offer visitors about 10 scheduled performances, three workshop areas at which they can try their hand, about two dozen craftsmen at work and many sculptures around the grounds to explore. During the summer the theater offers classical concerts by the Buffalo Philharmonic Orchestra, Pops concerts and a full range of entertainment, including jazz, opera, folk and ballet.

Last summer I had the opportunity of being an artist-in-residence at Artpark. The following are my impressions of the experience.

Well, the first day on the job went all right. My project was to make one-of-a-kind pocket knives, and I chose to do all of the work by hand: sawing out blades and springs, filing, heat-treating and fabricating handles, usually of precious metals and wood. Since I brought everything I needed, from workbench to tweezers, I was able to set up shop in about an hour and get right to work. Some of the other people spent most of the day arranging for materials to be delivered or tracking down equipment. The Park has available some big tools (table saw, arc welder, air compressor), but since they are used by so many people they’re not always in ready-to-use condition. Yes, there are advantages to working small.

After closing at 5:00 we were invited to a wine and cheese get-together. Figuring in craftsmen, musicians and all, there are about 30 visiting artists. And then there are about half again as many energetic young people, of college age, who will be here for the whole summer serving as assistants, interns or park guides.

We started this morning with a more or less formal introduction to the park and its policies, which are quite straightforward. The executive director, who oversees the whole operation is aided by two Program directors, one for the theater and one for the visual arts, a term expanded here to include all the visiting artists not directly connected with the theater.

The Visual Arts Director, Richard Huntington, explained that we are not here to teach and should not feel obligated to lay work aside in order to demonstrate to the public. It is understood that we will be cordial and willing to interact with those visitors who have questions, but personal work is the first priority.

This is the end of my first week; some of the novelty has worn off and been replaced by a relaxed camaraderie. Each craftsman has been assigned a small wooden structure (it looks like a garden shed). Since these heat up like giant solar ovens, almost everyone works in front of his shack under an awning, dragging out equipment each morning and stowing it away again at dusk. We are required to work from 11:00 to 5:00 but most people seem to be rolling in an hour or two ahead of that. This has become a friendly time for paying visits—sort of a shack-to-shack coffee klatch. At the end of the day, sometimes not until after 7:00, people sort themselves into groups that go off to find some dinner or evening entertainment. The dynamics of this group are friendly and supportive, seasoned with professional respect. I can understand how the nature of the group would greatly affect the Artpark experience. I lucked out. Tomorrow we have the day off. Some people plan to stay around here, while others will do some sightseeing or visit friends in the area.

It is for me a pleasant change to work outside, even though the weather has been hot. Not that communing with Nature while doing benchwork is without its problems. Trying to solder in bright sunlight is like tying your shoes in the dark: it can be done but you feel pretty clumsy. Finding a small piece of metal that has dropped onto the grass is flatly impossible. The Artpark theater has been a great fringe benefit. We are given two complimentary tickets each week and allowed unlimited free seating on the lawn area that is an outdoor extension of the theater. I’ve been to several concerts so far and plan to see several others. I think I’ve gotten more culture here than I have in the last year. Another regular evening entertainment is a slide show at which each of us shows our work. We do this two evenings a week, usually featuring four to six people at a time. Again, the mood has been altogether positive. And the work is very good. It’s exciting to be around so many talented people, brimming over with innovation and commitment.

This is the beginning of the last week and already there is a sense of things-being-over-too-soon. I had a chat today about the selection procedures for Artpark with Mary Roehm, a potter and consultant to the park. Applications are taken throughout the Fall and usually consist of a page of slides, a resume and a narrative description of the work to be done at Artpark. Project Artists also submit drawings, models and a budget for a specific piece (usually sculpture). Application is open to anyone. There is no policy against artists returning for several stints, but the selection leans toward new applicants in an effort to spread the opportunity around. All materials are reviewed first by the executive director, the visual arts director and at least one consultant, who is a working artist. After some preliminary sorting, this group meets to make the final decisions. About one in six applicants will be accepted. Mary stressed that there are no fixed policies, that the selection is an organic process of molding a group that will contribute to the park and benefit deserving artists. There are no specific guidelines on media or geographic distribution. Often a theme will present itself, emerging out of the applications received. The selection process tries to be open to this and sensitive to the many factors that will make a residency at Artpark successful for everyone.

Artists are paid both a salary and a stipend for living expenses during their stay by Artpark. Salary amounts will probably be different next year (increased to keep up with inflation) but I received $325 per week salary plus a living stipend of $150 per week. This can be used toward camping on the grounds at $4 per night, at a hotel whose rates were discounted for park residents or in any other way. Travel was reimbursed at the standard rate, and a materials allowance in the neighborhood of $150 was given to each resident. This last amount differed from individual to individual, depending on the project at hand. Kitchen facilities are available to artists without charge. lf a resident chooses to live frugally, travel cheaply and so on, he can take home about $1700 for the three-week residency. A more comfortable figure would be around $1200, allowing for a hotel room and meals in restaurants.

Last day. This week has seen a little less work and a little more socializing. I know I’ve met some good people here that I hope to see again. The feeling must be widely held, since plans have already been made for a reunion of this group next summer.

I didn’t have specific expectations of how much work I’d get done while here, but I feel satisfied with what I’ve accomplished. I did not feel pressured to work at a dazzling pace and so turned out eight knives in the course of my residency. Since my schedule is generally a jumble of teaching, preparing to teach, working on commissions, making jewelry for exhibitions and answering the phone, knifemaking has been for me one other activity to add to the already stretched schedule. The excitement of Artpark was to be able to focus on that single topic and work through ideas without interruption. I have a feeling that the designs and tricks I came across at the park would have come along anyway, sooner or later. But because of the focus of attention, I feel like I got around to them a year earlier than I would have otherwise. An example: It occurred to me, while sitting at my bench at Artpark, that most pocket knives when they are closed look like objects that are waiting to come to life—stalled cars, tractors in their barns. From there it was a short jump to the idea that a knife should have a life of its own, beyond its function, so I tried a couple knives that had a sculptural kind of presence when closed. I think it’s a direction I will pursue for a while. 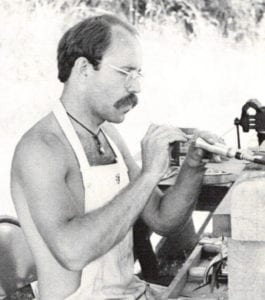 In preparing to write this article I’ve spoken with some metalsmiths who have worked at Artpark in the last several years. No two have the same feelings about their experience here. Artpark is sort of like an all-day Picnic in the country: if you had a good time you remember the sunshine and the good food. lf you had a bad time you remember the ants and mosquitoes. What seems to make Artpark a good time is undertaking work appropriate to the open-air, before-the-public working conditions, the ability to be flexible enough to work within the unusual (and unforseeable) dictates of the park, and a willingness to get along with the public and the other artists. For me Artpark was a tiring but exhilarating time, a three-week change of pace that will provide warm memories on cold winter days.

All articles by this author
Previous Jonathan Bonner: Whimsy and Vision
Next Architecture in Silver
Social media