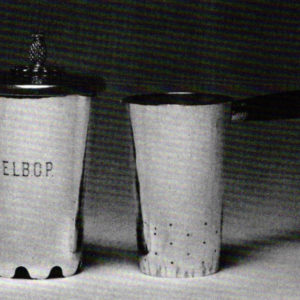 This article is one of a series of articles from Metalsmith Magazine “Art and Technics” talking about techniques in craftsmanship and design.  For this 1990 Fall issue, Curtis K. LaFollette talks about the machinist Franklin Porter.

Franklin Porter was born in 1869. He was a second-generation machinist who aspired to be a silversmith in the grand tradition. He was one of the first students to attend Rhode Island School of Design after its founding in 1877. He also traveled to Europe in 1902 on a quest for ornament. He returned with glass slides and full sketchbooks, but he was not to devote himself full time to silversmithing until he was 55 in 1924. His production over the next 10 years, however, was prodigious. By 1935, he had completed over 7,000 pieces. In 1927, for example, he executed 17 tea makers, 76 bowls, 322 spoons, 48 knives or spreaders and 244 pieces of jewelry, plus various other silver objects, ranging from a cigar box to 27 demitasse sets.

Perhaps his most distinguished design is the Queen of Siam tea infuser. This group of tea makers represents the culmination of an evolving design series. The process began in 1923 with order #20, a sketch dates “Sept. 14. 23,” and identified as “(Mrs. P.).” It is housed in the manuscript section of the library at the Essex Institute in Salem, Massachusetts. This sketch shows the origin of the infuser, with a layout diagram for a conic segment superimposed on a drawing of a strainer. Notations on the same page inform us that the finished piece was to be executed in 24 B&s gauge sterling with a finished weight of 35/20 oz. gross. It was to be 4½ inches high with 211/16 OD at the top and 1⅛ inch OD at the bottom. The lower half of the conic segment and the bottom plate were to be perforated with #53 M.T.II holes.

As he continued to produce and sell tea makers, the design evolved largely in response to the requests of his patrons. First, he added a beaker to house the strainer after it had been used, and later a cover to provide still greater refinement. With the addition of the cover, he was able to introduce his pineapple finial (the symbol of hospitality, you know). He came to use this pineapple on so many of his objects that it became synonymous with his work. The first sketch of a pineapple finial appears in a June 3 — 25 entry, as applied to a tea caddy. There is a notation indicating that the pineapple and husk (a transitional element between the finial and lid) required seven hours to execute on Sept. 21.

In addition to adding a lid and beaker to the original strainer, he simplified the design. First, he eliminated both a molding from the handle finial where it joined the wood and a similar molding from the top of the strainer. He reduced the number of holes on the conic segment from 144 located in the lower half to 40 located in the lower quarter. He then changed the configuration of the junction of the handle ferrule and strainer from a bulbous compound curve to a simple curve, which required far less hand forming and, in fact, could be mounted on a mandrel and trued up on his lathe. In its final form, the ferrule grows harmoniously out of the side of the strainer with no visible seams, producing a feeling of organic unity.

The pineapple itself is a real curiosity. Normally, one would expect a casting, but this is not the case. Instead, Porter used a piece of ⅜ inch-diameter sterling rod. The rod was bored through on center with his machine lathe. A smaller piece of sterling wire, the same diameter as the hole, was then inserted about 9/10 of the way through the ⅜ inch rod and soldered in place. A pilot cutter was next used to adapt the remaining hole to the live center on the lathe tailstock, the smaller wire being held in the chuck. At this point, the general shape of the pineapple was turned. Next, the grooves were hand cut with a three square file on a diagonal axis. The finial was removed from the lathe and the leafy crown textured with a matting tool, which Porter had made specifically for this purpose. The hole left by the pilot cutter is an integral part of the leafy crown. A transitional element, which he referred to as a husk, was lightly repousséd sheet silver cut out to suggest a biomorphic form. It and the lid were drilled on center to the same diameter as the hole in the pineapple, and the wire, which had been clamped in the lathe chuck, was inserted through the husk and lid and peaned over to form a rivet. 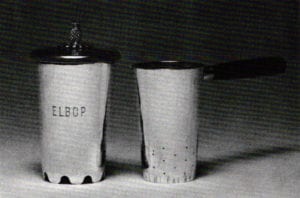 The tea infuser that I examined was probably produced in 1925. It is part of the permanent collection of the Essex Institute and is typical of the ultimate form to which these little tea makers evolved. I was dubbed Queen of Siam after one was presented to Her Majesty Queen Rampai Pannce and His Majesty the King of Siam while they were being entertained at the Myopia Hunt Club in the early 1930s.

The infuser in the institute’s collection is marker “P” as well as “F. Porter” and “STERLING.” It bears a presentation engraving “ELBCP.” The engraving was probably not done by Porter.

The strainer’s bottom is perforated by 24 holes arranged in three concentric circles on lines radiating from the center. The layout lines and circles are faintly discernible. There are five additional rows of holes located in the lower quarter of the strainer. There are eight holes in each line and the holes are staggered. The strainer is 76 mm high. At the top, the outside diameter is 48 mm, while the outside diameter at the bottom is 39 mm. The base disc is recessed 2mm from the bottom. The handle is rosewood. It is 84 mm long including the ferrule and has a maximum diameter of 12 mm. The ferule is 14 mm long. The strainer is a straight-sided conic segment with a vertical seam. The seam is not keyed and passes through the center line of the ferrule. The rosewood handle is retained by a single silver rivet. The ferrule is also seamed, with the seam facing down, and slightly flared where it meets the body of the strainer. The transition is seemingly invisible, the fitting so meticulous that even with a optivisor it is difficult to find a trace of the solder joint. Two fine grooves, which appear to have been lathed-turned, decorated the ferrule ½ mm and 1½ mm respectively from the junction of the wood. Wood and metal are so finely fitted that no separation has occurred through use or aging.

The beaker is also seamed without keys. It is necked in slightly at the top and bottom, but this operation is greatly simplified, because the top has a slot cut for the strainer handle and the bottom is cut to form eight scalloped feet, thus interrupting the fundamental structure of the conic segment and facilitating very rapid forming without need of repeated annealing, time consuming pickling and drying.

The lid is 23 mm high. It has a maximum outside diameter of 60 mm. The pineapple is 15 mm high and has a maximum outside diameter of 8mm. All sheet silver parts appear to be 24 gauge, as indicated in the original sketch. The edge of the lid is decorated with a series of closely spaced diagonal lines, identical in length. This patter was produced on the lathe with a knurling tool, another significant adaptation from Porter’s background as a master machinist.

The infuser blends ancient silversmithing skills with state-of-the-art technology from the Industrial Revolution. There is also a synthesis of functional simplicity and traditional ornament. As a pragmatist working during the darkest days of the Depression, Porter demonstrates a resourcefulness and sense of purpose typical of America’s silversmithing heritage.

Curtis K. LaFollette is a Professor of Art at Rhode Island College in Providence.

All articles by this author
Previous The Enamelware of Leila Tai
Next Helen Shirk: Patterns of Growth
Social media

What kind of paper to incorporate into silver clay book pendant?

What type of brushes when wet packing enamel

Protecting Gold Plating from Wearing Off

Is Northwest Pitchworks still in business?