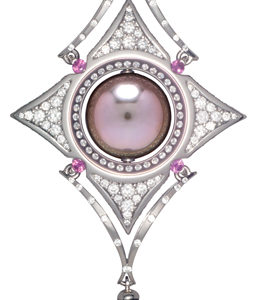 Design ideas often begin one way, then evolve into something different. Such was the case with Robin Waynee’s two-sided palladium pendant with pink sapphires, diamonds, and a rolling Tahitian pearl. Waynee, of Santa Fe, New Mexico, first envisioned this as a link in an eight-link reversible bracelet that would have held 3,000 stones—a very labor-intensive project. When she decided that wasn’t the path she wanted to take, the idea evolved into an intricate pendant design.

“Most of my designs borrow from one another,” she says. “Sometimes they are really big, outrageous pieces, and they then tend to evolve into or influence a whole direction of design.”

Waynee first made a detailed drawing similar to a blueprint, then husband and fellow designer Ryan Roberts translated it into CAD. The two 1.5 mm thick mirrored pieces that contain the center pearl—one side predominately pink sapphire, the other diamond—were cast in palladium. When joined, they reveal an open pillow from the side. After cleaning, tumble polishing, and soldering them together, Waynee moved on to fabricating the V-shaped bail, also in two pieces, from 2.5 mm palladium plate that she hand-tapered.

With the bail soldered together at the top, she notched each of the four ends so that jump rings could be tucked inside. “I wanted to show as little of them as possible,” she says. “It’s almost a shop rule—no jump rings—so I only use them when they’re absolutely needed.” Then she fabricated the similar lower section that holds the pearl drop.

Four small Vs were next fabricated and soldered into the open corners of the central section of the pendant to hold a stone at each location where the jump rings attach, with diamonds on one side and pink sapphires on the other.

She pre-polished the rest of the surfaces and pavé set 112 1.1 mm diamonds on the eight outside edges of the center sections, adding interest to the side view. Then she pavé set the diamond-intensive side with 12 diamonds in each quarter, in sizes ranging from 0.8 to 2 mm. After a final finish on that side, she covered it with masking tape to preserve the finish while she worked on the rest of the piece. Repeating the process on the predominantly pink sapphire side, she flush set the 16 pink sapphires, ranging in size from 1 to 2.2 mm, and masked them off. She inserted a wire pin through the pearl’s tube and laser welded it in place in the finished center section.

Moving to the upper and lower V-shaped sections, she soldered on the four jump rings that would attach to the center section. After cutting the seats for the stones on the top and bottom sections so they would be visible from the sides, she set the remaining 44 sapphires and diamonds, those in the top V ranging in size from 0.8 to 2.2 mm, and those in the bottom V ranging from 0.8 to 1.3 mm.

She lasered the jump rings shut and finished the bottom pearl setting—a cap made of punched palladium. After epoxying the 10 by 12 mm pearl in place, she laser welded the drop assembly to the pendant. A final polish completed the piece.

A beautiful bonus for the design is that the diamonds reflect into the center pearl, and the pearl reflects into the highly polished palladium surround. “It’s a cool effect with color,” she says. “It’s very alive.”