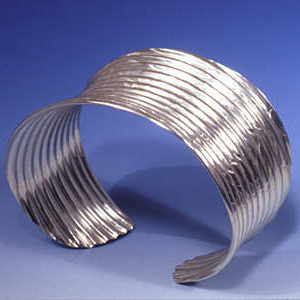 Call up your metal supplier and ask for a sterling silver alloy that is firescale-free, highly tarnish-resistant, very hard, and easy to work with, and you’ll likely hear a muffled chuckle on the other end of the line. Finding such a silver alloy is impossibleâor is it?

Argentium Sterling Silver, developed by Peter Johns of Argentium Silver Co. Ltd. in the United Kingdom , was lauded by some Innovation Awards judges for its superior qualities over standard sterling silver. The trademarked alloy, which is currently produced under license by Stern-Leach Co. in Attleboro, Massachusetts, was touted for the fact that it does not firescale, is anti-oxidizing, has low heat and electrical conductivity, has increased ductility, and can be heat-treated to achieve twice the hardness of standard silver. Argentium also has environmental and cost advantages because it doesn’t require cyanide or other hazardous chemicals for stripping or plating over firescale, thus eliminating production and finishing time.

“The main benefits of this alloy are its excellent firescale- and tarnish-resistance, coupled with good workability characteristics,” says Mark Grimwade, a metallurgical consultant from Middlesex , England , and a judge of the AJM Innovation Awards. “Hopefully, it has a promising future.” Johns expressed confidence that Ar-gentium Sterling Silver would enable the industry to improve its production pro-cesses and raise the public profile of sterling silver, thus increasing sales.

Another new manufacturing opportunity for the jewelry industry created by this alloy is the production of sterling silver money clips. According to representatives of Stern-Leach Co., the exclusive North American distributor of Argentium, this was not possible before because of the softness of the metal.

Its properties are also well-suited for traditional jewelry fabrication. “I love Argentium Sterling Silver,” says Cynthia Eid, a Lexington, Massachusetts-based designer who has been working with the alloy for several years. “I was thrilled to find out that it doesn’t firescale, and it’s more malleable and ductile than other sterling silver alloys. It’s very tarnish resistantâI haven’t seen a piece tarnish yet. This has become a big selling point when I present it to customers. Argentium has everything going for it.”

That’s quite a review for an alloy that came to be somewhat by accident. According to Johns, he was approached by a European company to test a new base metal alloy. The company had been researching the alloy for medical and fiber optics applications, but wanted to see if it would be of interest to the jewelry industry. Johns’ initial research showed that the alloy was easily workable using standard jewelry techniques, but it was too expensive for costume jewelry and of no interest to the fine jewelry industry. There was, however, one property of the alloy that intrigued Johns: It produced very clean castings. <div class="adframe"> <div class="adframe300x250"> <div class="adframe300x250label"> <i class="fa fa-gem icon"></i> Ganoksin is sponsored by</div> <center> <div id='div-gpt-ad-1479837980983-0' class="ad-item" style='height:250px;'> <script> googletag.cmd.push(function () { googletag.defineSlot('/87578358/ganoksin-paragraph-2', [ 300, 250 ], 'div-gpt-ad-1479837980983-0').setTargeting("topicid", ['jewelry-design', 'metal-forming', 'jewelry-making', 'metals']).addService(googletag.pubads()); googletag.pubads().setCentering(true); googletag.pubads().enableSingleRequest(); googletag.enableServices(); googletag.display('div-gpt-ad-1479837980983-0'); }); </script> </div> </center> </div> </div>

At the same time, a student approached Johns with a complaint about always having to remove firescale from sterling silver. He asked Johns if using less copper in a silver alloy would lead to less firescale. Johns explained that copper is necessary to achieve hardness in sterling silver, and that without a de-oxidizer, firescale will always appear. This led him to think of the base metal alloy he had been testingâwould it prevent firescale? Initial trials proved that the alloy successfully eliminated firescale in sterling silver, and 10 years of further research revealed its other beneficial properties.

It’s Argentium Silver Co. Ltd.’s goal to convey these properties to manufacturers, designers, retailers, and consumers worldwide, says Ken Mannering, the company’s marketing director. “This is the first fully branded silver squarely aimed at the consumer with the message that âthe days of polishing are over,'” says Mannering. “We will be spending in excess of $1.5 million in the United States in marketing and advertising Argentium, directing consumers to look for the âa’ mark as a standard of quality, authenticity, and tarnish resistance. We believe we will spearhead a renaissance in consumer interest in and willingness to buy silver.”