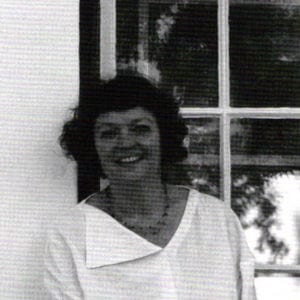 Aninka Harms: The Closure of Circles

In her 20th year of creating jewelry, Aninka Harms has returned to the place where her training as a designer began: Stellen-bosch in South Africa. 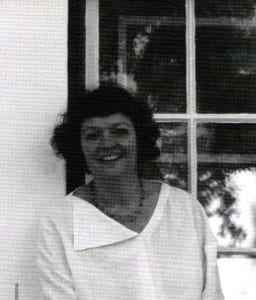 Anina Harms in front of her new gallery Ornament in Stellenbosch 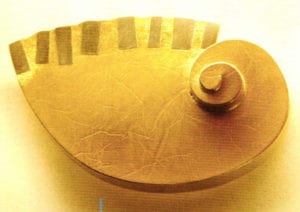 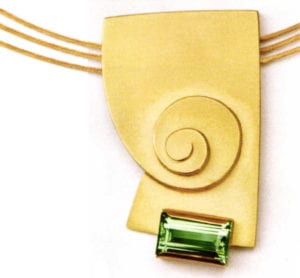 Pendant from the current collection made of 18 karat yellow gold with natural emerald, which is itself already a rarity 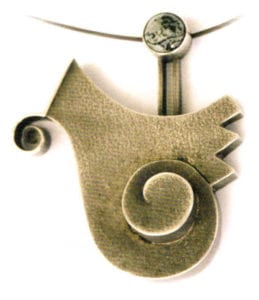 This old item of jewelry made of silver with moss agate (suspended on an old cello string!) is one of Aninka Harm’s first pieces. In this case also, the volute is in the focus of the designs

Ornament is the name of the recently opened gallery. The subtitle reads: Gallery for contemporary artifacts. After all, it exhibits “exclusively contemporary art products, which people have fashioned with their hands”, explains the gallery owner Aninka Harms with regard to her clear concept. “I find both the craftsmanship and the modern, artistic approach incredibly important l do not mind if it is jewelry, glass art, painting or anything else.” The exhibition space, in which the gallery owner, born 1964 in Pretoria, presents her own jewelry and artifacts by other designers in changing shows, is located in one of the most aged buildings in the old town of Stellenbosch, South Africa. Here, at the renowned University of Stellenbosch, is where Aninka Harms, baroque violinist, designer, gallery owner and bundle of energy all in one person, completed her art studies under Professor Dieter Dill 20 years ago. The snail-shaped adornments which are typical of a certain type of South African house and which are also seen as an important stylistic element in European baroque architecture inspired her at the time to create her first jewelry collection. Since then, the volute has been a constant leitmotiv in her unique pieces. She uses this not only in order to unite her two passions, art and music, and to make them visible and wearable. The two continents in which Aninka Harms is at home – she lived in Munich for many years after her art studies – can also be connected as an architectural method of style in her baroque, snail forms.

In South Africa, the gallery that Aninka Harms opened to mark her 20th anniversary as freelance jewelry designer has been welcomed with great interest. Just a few weeks after her first exhibition it became apparent that the 60 m­2 are actually too small. But Aninka Harms would not be Aninka Harms if she did not already have plans for her future up her sleeve She has plans for a second gallery in Germany, where she could show all the art that comes from her home country of South Africa.

All articles by this author
Previous Giampaolo Babetto: The Jewelry Architect
Next US Trends From Light to Dark
Social media