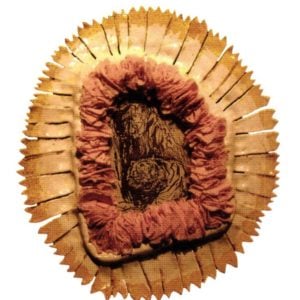 In mid-April of 2008, the SUNY-New Paltz MFA Metal program suspended its rigorous schedule for about a week. What were they doing with this precious time only a few short weeks before the end of the semester, when seven of the twelve were soon to mount their thesis exhibitions and commence their studies? 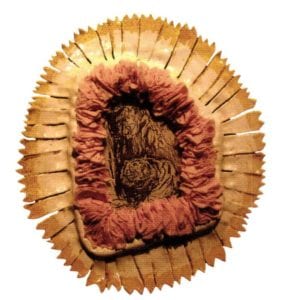 They were traveling to Florence, Italy to participate in an event called Siamo Qui (We Are Here ), initiated by Florentine jewelry school Alchimia to contemplate the future of jewelry. Fourteen schools of jewelry and metal from all over the world had been invited a year earlier to produce an exhibition in the Pagliere di Porta Romana, a large, historic hall near the Boboli Gardens and participate in a symposium at the Palazzo Vecchio.

The students from SUNY-New Paltz were one of these schools, with Michigan’s Cranbrook Academy, the only representation from all of North America. To be specific, the schools that participated were the Akademie der bildenden Kunste from Munich, Germany, Alchimia Scuola di Gioielleria Contemporanea from Florence, Italy, AR.CO from Lisbon, Portugal, Burg Giebichenstein Hochschule fur Kunst und Design from Halle, Germany, Cranbrook Academy of Art from Bloomfield Hills, Michigan, Gerrit Reiweld Academy from Amsterdam, Netherlands, Eesti Kunstiakadeemia from Tallinn, Estonia, Hiko Mizuno College of jewelry from Tokyo, Japan, Konstfack Stockholm from Sweden, Royal College of Art from London, UK, Shenkar College of Engineering and Design from Ramagan, Israel, South Carelia Polytechnic from Lappeenranta, Finland, SUNY-New Paltz from New Paltz, New York, and finally, Birmingham City University from the UK.

I was one of the nine New Paltz graduate students to travel so far to participate in this unique opportunity. As an enamellist, I had an agenda to spot some trends in enameled jewelry in this international academic climate. As one of few in my own program to use enamel in my work on a regular basis, and the only dedicated to the material, I hoped to find some allies at this event. So what did I find?

Not much. Out of a large hall showcasing exhibitions from fourteen schools, there seemed to be only three or four enamellists represented and their commitment to enameling is up for debate . The problem with this survey is that it could be considered an unlikely sampling for a study on enameling trends. I was participating in a jewelry event) not an enameling one, after all. But I found this to be an opportune barometer for the status, importance, and dedication to enamel in jewelry on an international academic scale . 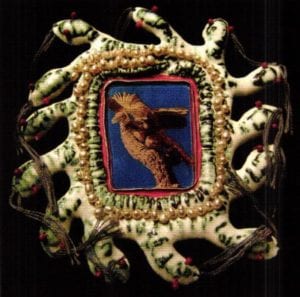 Over-fired enamel in one and two colors, combined with other materials and images from a student at Burg Giebichenstein University of Art and Design Halle, Germany.

My findings were that enamel does not figure highly on the scale of importance in this arena. Those who do use enamel in their jewelry appear to do so to achieve color and stability with a metal form. Many of the few who use it do so with a limited palette of colors, and one would surmise, application and firings. The most common use of enamel as a medium in jewelry is to exploit its untraditional, “experimental” potential. Whether on purpose or due to lack of training, the trend is to coax an aesthetic quality out of enamel that leads people to think that you do not know how to properly use it, or are prone to forgetting your pieces in the kiln. There was no Limoges in the Pagliere, no cloisonné, no grisaille. No evidence of knowledge of the long history of the medium altogether. 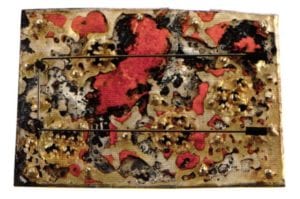 A landscape of over-fired enamel and charred stone settings adorn the backs of Stefan Heuser’s brooches from the Akademic der bildenden Kunste in Munich, Germany

For example, one student from the Cranbrook Academy of Art exhibited two brooches with flat, faceted shapes enameled purple and combined with other faceted materials. A jeweler from Burg Giebichenstein Hochschule fur Kunst und Design in Halle, Germany showed a number of large brooches with brightly colored enamel frames surrounding images and adorned with other materials. Stefan Heuser from the Akademie der bildenden Kunste

in Munich, Germany created a series of rectangular brooches with seriously charred enamel and stone settings visible from the back.

I do not mean to say that none of these jewelers are dedicated to enamel or aware of its “proper” usage. The trend is simply for a material experimentation, unsurprising, in fact, because the only thing that all schools of jewelry or metal seem to have in common at this point in time could be a rigorous commitment to material exploration, and all materials are fair game. Jewelry does not require metal anymore) or even a knowledge of how to use it. So it makes sense that this experimental mode of enameling is popular amongst those few academic enamellists. 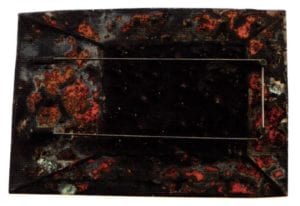 If I had to surmise the reasoning behind this lack of dedication to enamel, I would point to the lack of dedication to enamel in the academies, universities, and colleges across the globe. In the United States, there is only one college-level enameling program, at the Cleveland Institute of Art, led by Professor Gretchen Goss. The rest of the enamel education at this level happens as an optional and subordinate subject in metalsmithing and jewelry programs across the country which exist themselves as a small percentage in universities and colleges compared to painting, sculpture, and even ceramics programs.

There is little use of or innovation in traditional enameling techniques because, I suspect, most metalsmiths and jewelers just do not know them. I was fortunate to attend a university in my home state of Wisconsin with a formidable instructor of enamel, Professor Lisa Gralnick at the University of Wisconsin, Madison. Gralnick taught enameling the way she teaches every course. That is, thoroughly, knowledgeable and focused on mastery of technique, but with encouragement for challenging, thought-provoking, and contemporary approaches. In graduate school at SUNY-New Paltz, most of my colleagues did not know how to enamel or much about its rich history. They came from a variety of undergraduate backgrounds: Savannah College of Art and Design (SCAD), 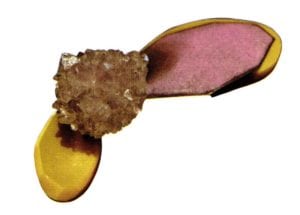 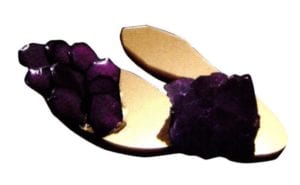 MassArt, Nova Scotia College of Art and Design (NSCAD), Moore College of Art, and more . The only graduate student that I encountered at New Paltz with a solid knowledge of enamel was Venetia Dale, who also came from UW-Madison, and had learned to enamel with Lisa Gralnick only a year or two before I had. Undergraduates at New Paltz can receive a very solid background in enameling with Professor Jamie Bennett, but where else is a challenging academic enameling education to be had? At this point, I speak only from my own educational experiences, but am compelled to do some research.

With only one college-level enamel program in Cleveland and a handful of programs teaching thorough enamel introductions, I would venture to say that we who are in the field of enameling today and feel dedicated to the medium have some work to do, if we want the state of enamel to improve.

Ganoksin is sponsored by
By Kate Bauman [Volume 28, Number 2, April, 2009]
In association