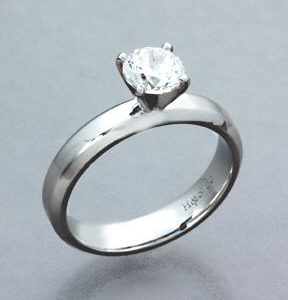 Palladium alloys for jewelry manufacturing contain 95% palladium and 5% other metals. Specific jewelry manufacturing methods like casting, machining, chain making, hand fabricating or other processes sometimes call for differing alloy ingredients. Of the popular alloys currently being used in the U.S. for palladium jewelry the common balance consists of 95% palladium, nearly 5% ruthenium and trace elements of other metals. The inclusion of specific trace elements offer certain benefits to the manufacturing process (e.g. hardness, better fluidity for casting, ease in machining) or lend to better wear of the finished jewelry. Alloys containing 95% palladium share inherent characteristics of the pure metal, such as

Well designed 950 palladium jewelry plays to the strengths of this unique metal–the aesthetics of its light, bright, white color, weight (comparable to 14k gold) and ‘feel’ as well as palladium’s metallurgical assets in setting, fabricating, casting and machining. It’s a joy to create a beautiful piece of jewelry which delights the wearer, and promises to remain trouble free for years to come. So here’s a tip: Emphasize the positive qualities of this unique metal in your designs. Whether palladium plays a supporting role to diamonds or fancy gemstones, or takes the spotlight in visual form or tactile comfort, employing its best characteristics in your creations will serve you well in saleable jewelry, customer satisfaction and your bottom line.

This article examines 2 basic examples of 950 palladium jewelry. They are both solitaires and both show examples of the best applications of palladium’s characteristics.

This example shows a comfort fit shank (inside of the shank is slightly rounded) and a low profile 4-prong setting. The inherent characteristics of palladium and the design of the parts were considered in their selection as explained in the following points:

This example shows a half-round shank and a high profile 4-prong setting. Again, these parts were chosen on the basis of palladium’s characteristic strengths and on the merit of their design for the following reasons:

Be sure to use pre-made components (findings) that are designed and made for palladium. Using dies originally designed for white gold to strike out components for palladium could lead to problems. White gold alloys contain high percentages of nickel and other metals that have different metallurgical characteristics (e.g. low malleability and greater hardness) than 95 percent pure palladium or platinum alloys. Dies designed for white gold specifications may prove to be insufficient for use in palladium jewelry components.

When palladium is used for jewelry manufacturing, is it as pure as platinum or white gold for the same?

Palladium is a noble metal like platinum and from the platinum group of metals. General purpose palladium alloys are typically mixed with ruthenium (another member of the platinum group of metals, or PGM) and trace elements of other metals. The content of palladium is 95% of the total alloy and referred to as 950Pd. This means that 950 parts of 1,000 are palladium and 50 parts are ruthenium and trace amounts of other metals. When white gold is used for jewelry, it usually occurs as 14- or 18-karat. 14-karat white gold contains only 58.5% gold in the alloy and 18-karat alloys contain 75% gold. Palladium and platinum are superior in purity over white gold alloys.