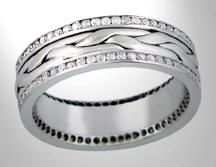 The new 950 palladium alloys are:

Palladium alloys formulated for jewelry predominately contain 95% palladium with the balance being ruthenium (another noble metal from the platinum group of metals, or PGM) and other trace elements. These trace elements are included in various combinations to create task specific alloys (i.e. for casting, fabricating, machining, etc.) for jewelry manufacturing processes.

Palladium does not require rhodium plating to create or keep its bright, white appearance.

Palladium is nearly half the weight of platinum, opening up new avenues for jewelry designers focusing on white metals.

Palladium is comparable to platinum when worn. It is strong, durable and tests have shown it outwears white gold.

Palladium is not likely to cause skin allergies.

950 palladium alloys are desirably workable for jewelry design and manufacturing procedures. They are malleable, ductile, strong and durable and able to be worked in a variety of methods.

Here are some examples of pieces made with 950 palladium, using a variety of jewelry manufacturing methods.

When attempting to weld a joint with a torch, the best result comes from using the above process. Begin with a butt joint with beveled edges and a thin piece of 950 palladium sheet measuring 0.12mm in thickness (A). Use a vented torch tip and with gas and oxygen as the fuel source and heat the joint until the small piece melts into the shank (B). The result shows a micro-pitted surface (C) where the joint was heated. The surface distortion is removed by filing and burnishing. 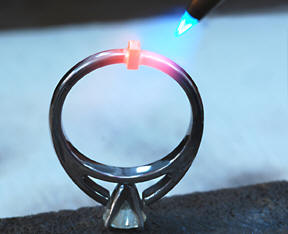 Can you torch weld 950Pd shanks when sizing a ring?

Yes, but its tricky. The main problem with welding palladium is oxygen absorption and the result is exhibits micro-pitting at the joint. (When molten, palladium dissolves large amounts of oxygen and will become a "homogenous liquid" in the sense that the elemental oxygen is mixed with the liquid palladium on an atomic level. When the metal solidifies, the oxygen wants to change phase back into a gas, and is released from the metal as just that, a gas. But the metal usually solidifies before all the gas can be evolved; hence gas porosity in the form of pits.