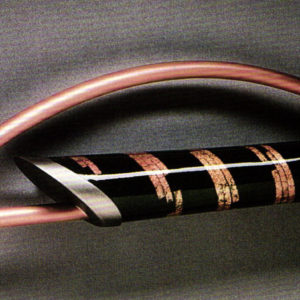 While Limoges, France was celebrating its 200th anniversary as the city of the “Arts of Fire” this year, July and August will also hold the 10th international Biennial of Enamel exhibiting some of the most exciting new enamelwork worldwide.

In a radical departure from previous juried shows, the organizing committee decided to extend invitations to prominent enamelists to exhibit five works apiece. Then, each invitee was asked to sponsor an artist of the new generation to participate. In this way, many new and unknown artists were given this prestigious platform on which to exhibit their work. I was one of the young artists to get into the show as a result of this new selection process. In all, 57 enamelists from 16 countries agreed to participate in the invited section, along with 52 young artists chosen by them. 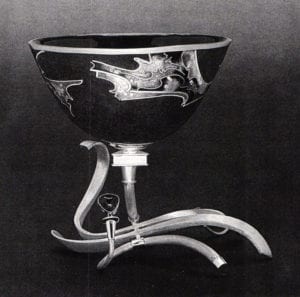 Since 1969, the Biennial has become an institution in France. Its importance as the premier international event for enamels has inspired other countries to pool their resources in support of a delegation. For instance, the U.S.S.R. has created a research studio in Palanga (Baltic Republic) to allow painters, designers and jewelers to develop in enamels. It is such a success that they have set up exchanges with French artists and have opened the Museum of Contemporary Enamel. 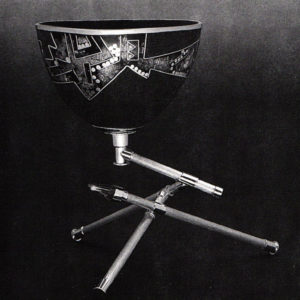 This year, at the Biennial, they were one of the most consistent in terms of quality and style. On the whole, the exhibition presented few pieces of jewelry. Instead, we saw many wall pieces, vessels and sculptures. Slowly, enamel is passing from two dimensions to three (nonvessel), with the creation of mobiles, machines, “industrial recycling” sculptures and poetic objects. 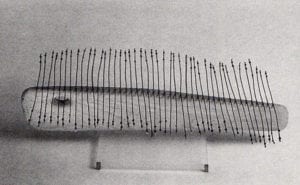 Contemporary Soviet enamel hos over the last 10 years tried to distance itself from Russia’s deep tradition of enameling. Thus, many of the Soviet artists avoided technical prowess in favor of kinetic or poetic effects. Birouté Stoulgaite’s piece, for example, exhibits vulnerability in his humility toward materials and in his fragile construction. Together, the five little “comblike” obiects, mode out of sea-washed wood and copper wire with enamel pearl drops, seem to form a community of simple and interdependent beings. Poetry also lies in the interaction of materials. The ephemeral wood that supports the more durable material of copper can be seen as a metaphor for power relationships. 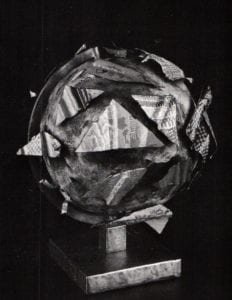 Artists from Limoges, a city with an enamel tradition as far back as the Middle Ages, are trying to overcome an obsession with technique. Vincent Pécaud seemed to be among the most spontaneous. His group of three busts constructed of patinated copper, bearing enameled necklaces, has a sense of surrealism. Instead of heads, the busts have stoppers as if they were containers. The concept of the presentation is as important as the piece itself. This setting gives the jewelry such an autonomy that wearing it becomes a side issue. 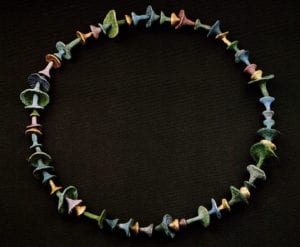 Simplicity and spontaneity in the execution is a good way to represent the sensuality of materials. I found this in the piece by Allison Macgeorge, a young American artist sponsored by Jamie Bennett. The necklace beaded with mushroom-shaped elements is mode of electroformed copper with mat enamel, gold leaf and patina. It was among the only pieces in which enamel was not pictorial and in which one could sense the artist’s hand. The richness of the glazelike coating counterbalances the shape and structure’s simplicity and primitivism. 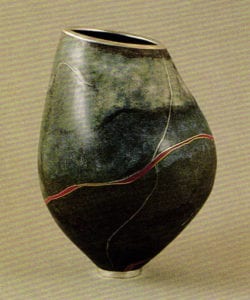 Nevertheless, the enamel doesn’t act as a lifebuoy seeking to save a shape from its lock of interest. There is in Macgeorge’s work o true sensuality of the material which leads beyond the object, to a consciousness of our own organic being; it is a moving piece. 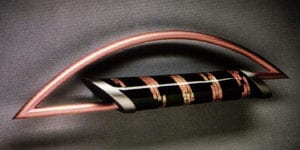 North Americans represented in the 10th Limoges Biennial of Enamel

All articles by this author
Previous William Harper: Artist as Alchemist
Next Chunghi Choo: The Energy Qi
Social media