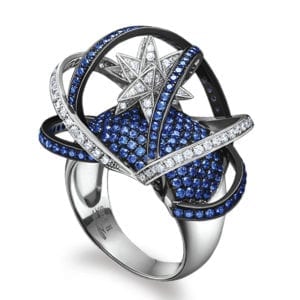 Zoe Zong – Sky Is the Limit

“We’re born, but we make changes along the road of life, perfecting our lives again and again.”

Custom jewelry doesn’t just allow customers the opportunity to have something unique made  for them. It can also be life altering. Just ask Zoe Zong.

Born in Beijing, Zong has been fascinated with the arts since she was a young child. After graduating from the Beijing Film Academy with a degree in animation, she went on to work as an illustrator and art director at various interactive media studios. But all that changed one day when Zong was out shopping for a gift for her mother.

She wanted to give her mom a unique piece of jewelry that would be a keepsake. As she shopped, she started having ideas about the type of jewelry she wanted to buy and raced home to sketch it out.

After a few revisions, she contacted a local jeweler and had the piece custom made.

“When the piece arrived, the sense of accomplishment and satisfaction was overwhelming,” says Zong. “I had to share that excitement by giving the gift to my mom as soon as possible. As she started to open her gift, the joy, happiness, and love flowed down her face in tears. It was a very special feeling to watch someone you love adore a gift that you created by hand. At that moment, I knew this was the path for me.”

Although she’s only been designing jewelry for a short time, already her designs have won acclaim: Her Supernova ring and earring set won first place in the Professional Excellence (1-3 years) category of the MJSA Vision Awards.

She was inspired to create the set by a lifelong fascination she’s had with the universe and its stars, particularly supernovas. A supernova is an astronomical event that occurs at the end of a massive star’s life. Out of fuel, the star begins to collapse before erupting in a giant explosion, shooting off elements that travel on to form new stars and planets. What’s left behind of the star’s core will then either collapse to form a black hole or a neutron star.

Zong sees parallels between supernovas and human life. They are both “about rebirth,” she says. “We’re born, but we make changes along the road of life, perfecting our lives again and again.”

Initially, Zong conceived the set as two-dimensional. “The first earrings had a 2-D star in the middle,” she says. “But it appeared more flat and dull than I wanted.” After careful consideration, she created a three-dimensional design to better reflect the idea of the tension and explosiveness of the event.

She also designed the earrings to be multi-functional, with two parts: ear studs and eardrops. The star-shaped studs can be worn alone or with the eardrops, which attach courtesy of a small ring. Zong wanted to give the wearer the option to keep it simple with the studs for a casual daytime look, but also have a more eye catching option for high-profile occasions.

When settling on the color of the earrings, she opted to switch the color scheme between the earrings, believing that it would better represent the idea of life and change.

“Much like the Chinese philosophy of yin and yang, the two colors represent the concept of the universe. I wanted the piece to represent life and the universe, so by reversing the color scheme between the earrings, it gives a better overall effect with a sense of spirituality and the universe,” she says.

She decided on a blue-and-white color scheme for the pieces using blue and colorless zircons. For additional contrast, Zong chose to plate parts of the silver pieces with black rhodium.

“The contrast of black and white strengthens the visual impact of the push and pull of the universe,” she says. “The blue gemstones [which are set in the rhodium- plated sections] are also more eye catching with the contrast. This helps the blue and white gemstones become more radiant and beautiful to each other, matching what you see in the universe when you look up at the night’s sky.”

Because of the size and curvature of the pieces, polishing was a challenge. “The factory machines were not adequate enough to handle polishing a piece with this unique design,” Zong explains. “I had to work with the factory to help develop a new small tool that could be properly aimed to polish the difficult parts of the set.”

Happy with the resulting set, Zong’s only regret is the materials used. “I believe I could have made the overall effect of the piece become more bright if I had used diamonds, blue sapphires, and 18k gold.” For a designer just at the beginning of her career, her future is already looking pretty bright.