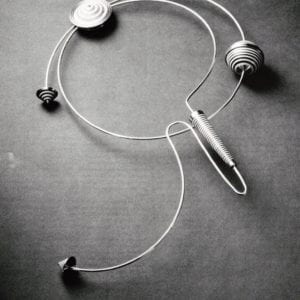 Those of us who have been following Wendy Ramshaw’s work, for close to 20 years, hove come to anticipate the fluid evolution of her personal language. She takes on challenges with great deliberation and resolve; even chance effects are handled with a sureness that results from her mature and in-depth exploration of the jeweler’s process.

So too with “Picasso’s Ladies,” which effortlessly appropriates 15 of Picasso’s female portraits as subjects for commissioned jewelry. Her refined, sculptural body ornaments seem a fitting tribute to the women who made Picasso happy, the “ideal” wearers whom he celebrated in these paintings. Wendy Ramshaw chose the sensually poised, often ornamented sitters, responding to their emotional power, their individuality in mood and temperament as well as their physical rendering.

Ringset for “The Dream” (detail), set of 40 rings, 18k yellow gold, gemset with garnet, sapphire, moonstone, tourmaline, labradorite and amethyst on a Perspex stand, about 7″ l.

She abstracts the emotions and motifs of each painting and assimilates them into jewelry designs of more openness, richness and added sinuousness. Nevertheless, she retains her signature features – precise construction, a subtle balance of quasi-geometric forms and a contained mechanistic feel.

Wendy Ramshaw has long been interested in working from a series of portraits. She was inspired by the paintings of the well-loved, calm, already bedecked subjects: traditionally the sitter for a commissioned portrait as well as the expected client for a jewelry commission. Historically, “precious” jewelry has glorified the wearer and created a showcase opportunity for the generous donor to his lady.

Wendy Ramshaw reminds us of these ongoing issues, at a time when doubtless many of her female clients commission their own jewelry. She responded to the vitality and spirit of Picasso’s women, as that energy speaks to late 20th-century expression, as well. She has expanded her vocabulary with fresh combinations of personal imagery, materials and techniques. She further expands on the perception of jewelry as freestanding sculpture of a particular scale. She continues to involve the wearer in a direct, creative relationship with the work. 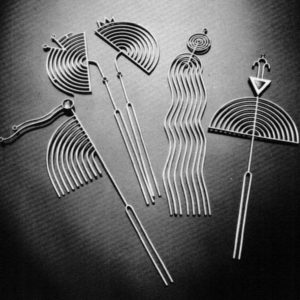 Picasso’s interest in the fractured profile inspired Earrings for “Woman With a Large Profile.” Wendy Ramshaw looked at the way Picasso distorted, rebalanced and juxtaposed frontal and side views. The large, dark space in the portrait suggested linear earrings that echo the drawing’s complex interrelationship of forms. She created overscale, semicircular ear ornaments in silver, with accent forms in gold. The asymmetrical suspension design with a strong horizontal thrust has a powerful simplicity. The earrings partly cover the side of the neck and decorate the cheek of the wearer. The linear, open nature of the design makes them delicate, defying the boldness of their scale. This expansion of traditional earring scale suggests primitive adornment, a source of inspiration and energy for both Ramshaw and Picasso.

In Neckpiece for “Woman in a Rocking Chair,” Ramshaw responds to the lyrical rhythm in the composition by her inventive flowing line and specific volume. The piece circles the neck twice, ending in a pair of loops, one of which echos the “encasing” of the figure in the rocker. The spirit of the form suggests the motion of rocking. The idea is enhanced by the springiness of the metal that projects the movement of a rocker. The piece is aggressively large-scale, encumbering the wearer. The asymmetry of the design odds to the geometric cone, bead and disc shapes of black and yellow Colorcore tipped with nickel alloy that emphasize the flamboyant form of the dramatic neck ring. 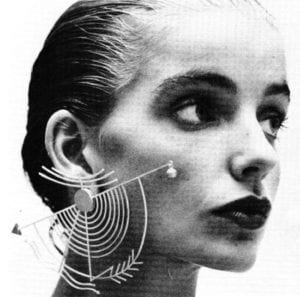 She responded to Picasso’s goddesslike profile with Haircombs for “Portrait of a Young Woman, Version XIII.” These are meant to be worn high on the crown and to be seen from all sides. In design, the five silver combs manipulate a series of simple, abstract shapes in varying patterns. There is a power in the repetition of line and volume and a delicacy in the thinness of the overall forms. The linear forms refer to the portrait’s hanging hair, as do the gemstones that complement Picasso’s palette. The sensuality of the portrait is emphasized, focusing on the long hair and the long neck being “crowned.” The placement of the flat forms on the wearer’s head suggests myriad spatial relationships in real and implied space. The gesture of the forms and their open-ended pattern suggest vitality and spontaneity.

Wendy Ramshaw’s 40 Rings for “The Dream” was inspired by the mood and rhythm of the sitter. The piece is romantic, with tiny, brilliant precious and semi-precious stones of red, pink, purples and whites, accented by gold moon and star shapes that look like little rings projecting out from the fingers. The flowing hair, long neck and entwined fingers of the model suggest sensuality.

A sculptural perspex stand with colored lines echoing the rings completes this elegant freestanding form. Wendy Ramshaw has expanded her familiar ring set, intended for the wearer to select any number for any number of fingers in varying combinations of each wearing. Picasso’s focus on parts of the whole invited the viewer to see the body better. Wendy Ramshaw continues to involve the wearer in esthetic decisions at a direct participatory level, an aspect of body adornment both new and very old. She creates a continually variable, flexible body ornament. In so doing, she extends the language of the jewelry by presenting it in the round. 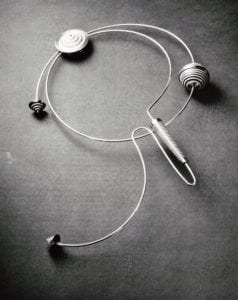 Wendy Ramshaw combines the vitality of primitive body ornament with 20th-century form and technology. Within a chosen vocabulary, on invented language, she celebrates an interest in relationships – the parts to the whole and the issue of choices. Her continuing exploration of the link between the wearer and the piece is reflected in the ongoing evolution of her work. She found in Picasso a mutual celebrant of female beauty and form. She responded to his exuberant vitality by translating his emotional designs into on ever-richer language of jewelry.

An exhibition of Wendy Ramshaw’s “Picasso’s Ladies” was mounted at Joanne Rapp Gallery: The Hand and the Spirit in Scottsdale, AZ in February, 1991. A catalog is available for $15, including postage and handling from the gallery at 4222 N. Marshall Way, Scottsdale, AZ 85251.

Gail M. Brown lives in Philadelphia and writes on jewelry and fine crafts.

All articles by this author
Previous The Life Works of Carl Jennings
Next Metalsmith ’91 Spring: Exhibition Reviews
Social media