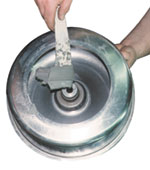 Since A. Robert Saccoccio founded Aro-Sac, Inc. (N. Providence, RI) three generations ago, the company has been a leading manufacturer of earring clips and other components for the jewelry industry. And, it continues to this day, providing the jewelry industry with high quality products and the newest and most innovative designs.

The manufacturing process consists of traditional stamping and forming of various metals, such as brass, copper and sterling silver. However, once the pieces are formed, they must be polished inside and out and burrs removed. This is accomplished using vibratory finishing, which also carries with it its own particular waste treatment provisions.

As with any vibratory application, a slow, continuous stream of water is fed into the bowls for lubrication of the parts and finishing media. The water discharged from the vibratory bowl contains metal fragments and degraded media that require disposal. Flushing the water down the sewer was not an option for Aro-Sac due to the metal content of the effluent, not to mention the possibility of clogged pipes due to the ceramic and plastic media fines. Until recently, the company evaporated the used water, which was time consuming and rather expensive, and then collected the residual sediment for proper disposal.

The inefficiencies of the process became apparent to Bob Montaquilla, president, and Dave Ruggiero, Jr., plant manager. Water use was high, evaporation was taking too much time and costing more than they liked. Also, sediment disposal was not only expensive, but it had to be accompanied by complicated paperwork.

Messrs. Montaquilla and Ruggiero investigated methods for cleaning the used vibratory water and chose to install the Centech 3100, a filterless filtration system from Barrett Centrifugals. The system consists of a capture tank, centrifuge and 250-gal holding tank. The water contaminated from jewelry finishing drains from the vibratory bowls into the capture tank. From there, it is pumped into the centrifuge where it is spun at 2,100 times the force of gravity. This forces the metals and abrasives to separate from the water and collect in the centrifuge’s bowl. The clean water flows by gravity to the 250-gal holding tank, which backfeeds to the capture tank, to be fed again through the centrifuge. This recirculation loop, together with the high gravitational forces generated by the centrifuge, removes solids as small as 2 microns while maintaining a low level of contamination in the water.

The centrifuge increased the life of the vibratory system’s water 12-fold. The water, which was normally evaporated weekly, could now be evaporated once every three months. Also, the water that was recirculated back to the vibratory bowls daily had a consistently low solids content. The ability to efficiently and cost effectively deal with his vibratory effluent allowed Mr. Montaquilla to expand his business by offering his vibratory services and expertise on a contract basis.

However, Mr. Montaquilla’s life was about to become even easier. During a visit from Bel Air Finishing, the company’s media supplier, Mr. Montaquilla was introduced to Aqua Safe, a quick, economical, easy-to-use dry treatment that encapsulates metals, oil and other contaminants from aqueous streams. The product causes chemical and physical reactions that encapsulate contaminants, developing a floc that sinks to the bottom of the holding vessel. Frequency of treatment varies depending on the type of metal finished and system used.

The water is agitated for several minutes, after which the flocking process starts. This encapsulates the suspended contaminants, even submicron particles and emulsified oils, causing them to settle to the tank bottom. The treated liquid is then pumped through the centrifugal system to remove the encapsulated material.

The combination of the mechanical centrifuge and the chemical flocculent provides water so clean that Aro-Sac has used its water for six months without evaporating or replacing it. Because the encapsulation process is so thorough, the company has been able to send the flocked sludge to landfill as a non-hazardous material.

“I have the best of both worlds,” said Mr. Montaquilla. “The centrifuge maintains a low solids content in my water on a daily basis, and the encapsulation process allows me to essentially start with new water after each treatment. The techniques make sense on their own and even more sense together. The combination has been a real time and money saver.”

Note: Steven Alviti can be consulted on finishing process technology at

By Sallie Guskey – © Barrett Centrifugals – 2001
All rights reserved internationally. Copyright © BelAir. Users have permission to download the information and share it as long as no money is made. No commercial use of this information is allowed without permission in writing from BelAir.In association with BelAir
Category:
About the author